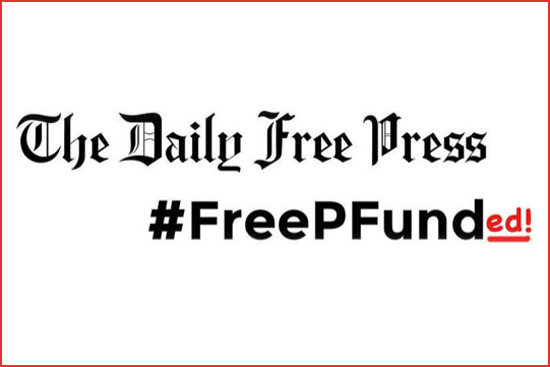 While the Daily Free Press surpassed its $70,000 fundraising goal, it is still accepting donations on its homepage through PayPal. Photo courtesy of FreepFund

As of a week ago, it seemed likely that the weekly print version of the Daily Free Press might not survive. BU’s independent student-run paper announced last Monday that it was almost $70,000 in debt to publisher Turley Publications and had less than eight weeks to come up with the funds.

By Wednesday, the paper had raised more than $17,000 in donations from close to 300 alumni, professors, students, and friends through an online campaign on the crowdsourcing website GoFundMe. An additional $10,000 donation from Freep alum and Fox News host Bill O’Reilly (COM’75) and a $50,000 pledge from local car dealer and philanthropist Ernie Boch Jr. clinched the amount needed to secure the paper’s print future.

Daily Free Press editor-in-chief Kyle Plantz (COM’16) said he initially had doubts that the paper could raise the $70,000 in time. He says it was “overwhelming” to surpass the needed amount in just 48 hours; the total amount raised is now estimated at more than $82,000. Plantz says the newspaper, which was named third-best all-around daily student newspaper in the northeast region by the Society of Professional Journalists in 2013, has yet to decide what to do with the extra funds.

“I talked to Bill O’Reilly on the phone, and he said he had fond memories of the paper and wanted to donate, and then on Wednesday we heard from Ernie Boch Jr.’s secretary that he wanted to contribute,” says Plantz. “We also received support from former Freep-ers from the 1970s and 1980s, parents, friends, and faculty members. The bond we have at the Freep extends across generations. It was nice to see that for student journalism and shows we deserve to have a place.”

The 44-year-old paper had taken steps to reinvigorate itself before this latest financial crisis. In a move that echoed choices recently made in newsrooms across the country, the Daily Free Press scaled back production of the print edition from four days a week to one day a week last May (they publish daily online). A major reason for the decision was declining ad revenue. In fiscal year 1998, ad revenue was $504,027. In fiscal year 2008, it was $314,814. And in the fiscal year that ended August 31, 2014, it was just $101,565.

The publication’s website underwent a redesign this summer, a move former board chairman Alex Nawar (CAS’14, GRS’14) hoped would increase revenue from online sources and provide the paper with financial security.

The online-first version is “more invigorating,” says Plantz, who joined the paper his freshman year and rose through the ranks to become associate editor and city editor before becoming editor-in-chief. “Laying out a paper every day is tedious and requires a lot of work just to fill the space. Being online first gives us a lot more flexibility and pushes us to report news at a faster pace while maintaining accuracy. And online we have more space for photos, maps, and graphics, and that gives staff room to stretch their wings a little bit. They are using the skills that are necessary to getting a job in the journalism world right now.”

Plantz, who estimates that he spends from 40 to 50 hours a week in the Freep’s offices on Bay State Road, says that working for the paper has given him the kind of hands-on education that he couldn’t have gotten in the classroom.

Contributions and posts on the GoFundMe page echoed that sentiment, many coming from alumni. Pulitzer Prize–winning journalist Don Van Natta Jr. (COM’86) donated $300 and one-time CBS News correspondent and Bravo host Andy Cohen (COM’90) gave $250. The most telling comment may have come from Melanie DeCarolis (COM’92), now a copyeditor, who donated $75. “I tell everyone I didn’t major in journalism or English at BU; I majored in the Freep,” she wrote.

The GoFundMe page is officially closed, but the Freep is still accepting donations on its homepage through PayPal.

There are 2 comments on Long Live the Daily Free Press