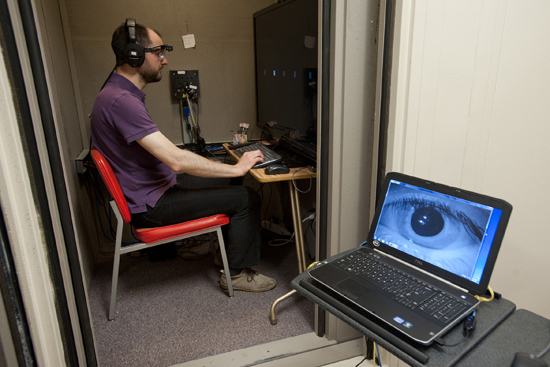 The White Stripes is one of Erick Gallun’s favorite bands. But years before the rock duo split in 2011, he’d stopped going to see them. Gallun recalls his last, ill-fated attempt, when he was a postdoctoral fellow at BU and the band was performing in a New Hampshire hockey rink. His wife had a great time, but for Gallun, who is deaf in one ear, the experience was a bust. His right ear couldn’t filter out the reverberations in the rink, making the event about as frustrating as a feedback-riddled cell phone conversation. “The concert was essentially ruined,” he says.

Although Gallun didn’t have a hearing aid then, he says he doubts the one he’s using now would have made much difference. But in 2012, he tested a device he believes could get him back into the rock music scene: the visually guided hearing aid (VGHA), being developed by a Sargent College professor.

The VGHA can approximate or even surpass the normal human ear’s ability to choose what to tune into and what to ignore. It does this by making two preexisting technologies—an eye-tracker and an acoustic beam–forming microphone array—work together to counter some of the problems in typical hearing aids. Right now, the VGHA is a lab-based prototype whose components connect via computers and other equipment, but with further development, it could become a pair of portable hearing aid glasses.

Gerald Kidd, a SAR professor of speech, language, and hearing sciences and a specialist in psychoacoustics (the study of the perception of sound), came up with the idea for the VGHA in 2011. He’s now put it together at SAR’s Sound Field Laboratory with the help of an international research team and grants from the National Institutes of Health. Kidd believes that his team, which includes Sylvain Favrot, a research engineer in the SAR speech, language, and hearing sciences department, and staff at Sensimetrics Corporation of Malden, Mass., is the first to integrate these two technologies. And the test results are impressive: no other hearing aid, Kidd says, can do what this device can.

The VGHA is the latest advance in Kidd’s work to solve “the cocktail party problem,” where people with hearing loss struggle to follow conversations in noisy environments. It’s a big issue: nearly 20 percent of Americans age 12 or older have hearing loss severe enough to make communication difficult, Johns Hopkins Medicine reported in 2011. Typical hearing aids may not help much in some situations, Kidd says—they amplify everything, even those voices and sounds you want to tune out. One hearing aid in development tries to fix this by using the wearer’s head movements to guide the aid’s microphones. But this can tire the user, he says, and it’s relatively slow: we can’t turn our heads as quickly as we turn our attention. The VGHA addresses these problems by using eye movement (which is quicker than head movement) to steer the aid’s microphones, “like an acoustic flashlight that you’re shining on what you want to listen to,” Kidd says.

Gallun, now a research investigator at the National Center for Rehabilitative Auditory Research, tested the VGHA as a consultant on the project—with exciting results. Sitting in a listening booth at Sargent wearing the VGHA’s eye-tracking component—Mobile Eye-XG—he listened to recorded voices speaking from slightly different directions. He was to pick out what one particular voice was saying—no easy feat with impaired hearing, given that all the voices were speaking at once. But by looking in the direction of his cue, he “told” the eye-tracker to make the VGHA’s microphone component amplify the voice he wanted, helping him hear what it was saying. “I’ll take two!” Gallun enthused to the team. He’s excited about the VGHA’s potential not only for himself, but also for the veterans he works with at the Portland Veterans Affairs Medical Center in Oregon, many hearing-impaired from exposure to blasts.

Although the VGHA is still a prototype and needs further testing, Kidd hopes enthusiasm for the technology will propel its development. Interested hearing aid companies, he says, could make the device wearable and attractive. Kidd and Favrot also speculate that the VGHA could piggyback on emerging technologies like Google Glass—lightweight glasses whose capabilities range from projecting driving directions to responding to voice commands.

Whenever the VGHA reaches consumers, you can expect Gallun to get his hands on one. All he’ll need then is a White Stripes reunion.

Hearing Aid of the Future

There are 5 comments on Hearing Aid of the Future