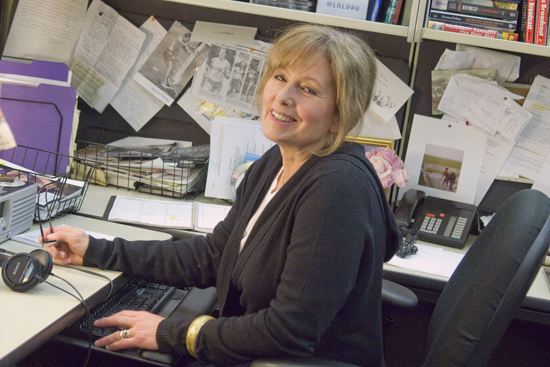 Here & Now will expand to two hours this summer. The show is hosted by Robin Young. Photo by Kalman Zabarsky

This summer, the country will be tuning in to the studios at 890 Commonwealth Avenue more often than ever.

National Public Radio last week announced a new partnership with WBUR, Boston University’s NPR station, that will push the station’s Here & Now to a larger nationwide audience. Here & Now will expand from one hour to two hours and will be updated for different time zones across the country. The show will replace Talk of the Nation, a call-in show that has been on the air for 21 years.

The change comes in response to NPR member stations’ growing demand for news programming, and ultimately means NPR can better react to breaking news situations. The two-hour Here & Now, a magazine-style news show, will be produced from noon to 2 p.m. ET, and then updated as needed until 4 p.m. for stations that choose to carry it later in the afternoon. Here & Now will bridge from Morning Edition, which begins at 5 a.m. in some markets and is updated until noon, to All Things Considered, which starts at 4 p.m.

The change marks the first time that NPR has collaborated with a local radio station to bring a show to the national market. “This partnership allows us to deliver compelling news and cultural coverage throughout the day and keep listeners tuned to public radio,” says Kinsey Wilson, NPR’s chief content officer and executive vice president. “In WBUR we have a strong editorial partner.” Here & Now, he says, is a “a smart, well-produced news program.”

The partnership consists of many moving parts: Robin Young, the host of Here & Now since 2000, will be joined by Jeremy Hobson (COM’04), who currently is the voice of Marketplace Morning Report, when the show’s new format launches July 1. WBUR’s Radio Boston cohost Meghna Chakrabarti (GSM’13) will serve as the program’s backup host. NPR bloggers, reporters, and editors will contribute to Here & Now’s daily lineup, and the show will also showcase reporting from other NPR news programs.

“We are exceedingly proud of Robin Young and the entire team at Here & Now,” says station general manager Charlie Kravetz. “It is their exceptional work that has created the opportunity for WBUR and NPR to collaborate on this new venture.”

Until now, Here & Now has been distributed by a rival programmer, Public Radio International.

Talk of the Nation host Neal Conan, a 35-year NPR veteran, will “step away from the rigors of daily journalism,” according to a press release from NPR.

Here & Now began in 1997 and expanded to a national audience in 2001. Today it reaches about 1.35 million listeners a week, according to the New York Times. The show is currently aired on 182 public radio stations nationwide, including WHYY Philadelphia, WBEZ Chicago, and KOPB Portland.

Here & Now has won several awards, among them the Edward R. Murrow Award for best news service, Associated Press Awards for best newscast and best use of sound, and a Public Radio News Directors, Incorporated (PRNDI) award for best newscast. Recent stories include a report that female adolescent refugees face the greatest risks, coverage of Netflix’s move to original programming, and a proposal by the Environmental Protection Agency that would ultimately raise gas prices.

Host Young is a Peabody Award–winning documentary filmmaker with over 25 years of broadcast experience. She has received several Emmy Awards for her television work, has been a correspondent for the Discovery Channel, CBS, and ABC, and was a substitute host and correspondent for the Today show on NBC for several years. Cohost Hobson started as an intern at NPR and has worked as a producer for NPR’s All Things Considered and Wait Wait… Don’t Tell Me! He wrote for the Daily Free Press while at BU.

Over the next three months, NPR and WBUR will hire new staff members for the expansion.