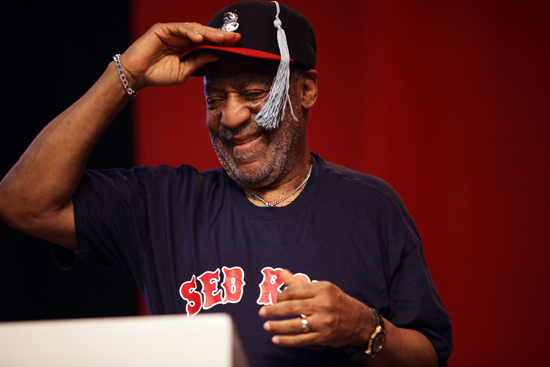 In his speech to School of Education graduates, Bill Cosby used his own youthful failures to inspire tomorrow’s teachers not to give up on kids. Photos by Kristyn Ulanday

People outside Walter Brown Arena must have heard the roar of the crowd inside Saturday morning when Bill Cosby told the 2013 School of Education graduates, “Don’t you dare accept that you’re teachers because you can’t do anything else.”

Sporting a tasseled Terrier baseball cap and wriggling out of his academic robe to reveal a Red Sox T-shirt whose letters had been transposed to read SED ROX, the spirited 75-year-old actor, comic, author, and producer, who holds a doctorate in education, gave a speech that brimmed with both pathos and humor, using his underachieving youth as an example of how teachers can and must make a difference.

“You always hear that people who can’t do, teach,” he said. “But if you don’t teach, they can’t do.”

Hardin Coleman, dean of SED, opened the proceedings by urging the group of 92 undergraduates and 143 graduate students, among them 42 double Terriers and 4 triple Terriers, to “be lifelong learners.” In his speech later, Cosby gave a nod to Coleman’s grandfather, William T. Coleman, the founder of the Boys and Girls Clubs of Philadelphia, where Cosby played basketball in his youth. “He saved many lives,” he said, adding that the beloved elder Coleman didn’t let kids like Cosby get away with anything.

Addressing graduates likely to have come of age watching him wrestle with the educational challenges and triumphs of the Huxtable children on his wildly popular 1980s sitcom The Cosby Show, the internationally known entertainer shared stories of his own academic failures. To waves of laughter, Cosby described a fourth grade teacher, a Russian immigrant all of 4-foot-11, who refused to put up with his excuses, and at least fleetingly, got him to change his ways. “She sat on me,” said Cosby, who at the time weighed, he said, “about 200 pounds.” He recounted these words from one of his middle school teachers: “William has a quiet way of not listening.”

“It wasn’t that I didn’t care,” recalled Cosby, who grew up in Philadelphia and quit high school when he was 19. “I had the idea that this was a free ride.” In spite of his intelligence, he never studied, reasoning that since “sooner or later the world would end,” cracking the books would prove to be a waste of time.

After leaving high school Cosby worked at a few local, low-paying jobs, including shining shoes with a homemade shoe-shine box. But he was lonely “with no one to play with,” so he joined the US Navy, “not to save America,” he said, but “to get off my block.” He credits military boot camp with putting him on track to redeem his past failures. It was where he learned to pay attention, learn, and shed the attitude that prompted his drill sergeant to call him a name meaning “excrement from a maggot.”

“‘I’m not your mother,’” Cosby remembered the hulk of a sergeant saying. “And he continued to prove that.” His stint in the Navy turned his life around, easing his way into Temple University in spite of his initial SAT score of 500—that’s 500 total, because as smart as he was, he joked, he didn’t know anything. “They say dying men see their lives pass before them. That’s how I felt at the SAT exam.”

A late bloomer, he grew enthralled with learning, and studying, during his time at Temple, which then cost $365 a semester, “plus free subway tokens.” Freshman year he “was enrolled in remedial everything,” he said. “I loved it.” He became a teacher, but one in the “Trojan horse disguise” of a physical education teacher. (In his youth, he had excelled in basketball and other sports.) His goal, he said, was to light a fire under kids who thought the way he’d thought, adding that he decided he was “going to save them in spite of themselves.”

“As student teachers, your goal was, you thought, if I could save just one person,” Cosby told the graduates. “Then you realized they didn’t want to be saved.” The crowd laughed. “That’s not funny,” he said.

“So here you are,” he told the graduates. “It is your job to teach. I don’t know what fool said, leave no child behind, which means the behind moves forward and the brain goes nowhere.” Teachers need to reach out to troubled or distracted children, because often “you are it,” he said. “The children who come to your classroom come from someplace and you have no idea what it’s like for them.” Forget about trying to win over jaded colleagues who “have given up. You can’t save them.”

“You want to find that next Bill Cosby,” he said. “You make me very proud and very happy today. You are teachers. You are everywhere.”

“Find That Next Bill Cosby”

There are 2 comments on “Find That Next Bill Cosby”