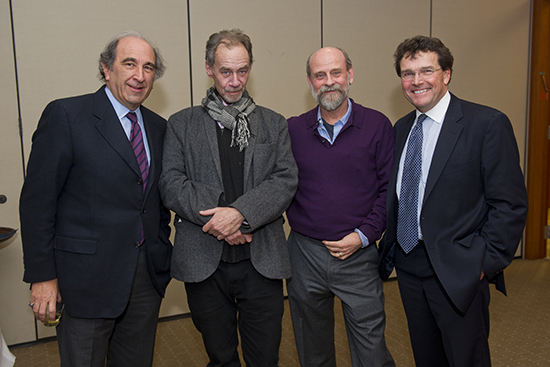 In a move that Thomas Fiedler, dean of the College of Communication, describes as potentially transformative, New York Times media columnist David Carr, one of the most knowledgeable and widely read authorities on new media, will join the COM faculty in January as the first Andrew R. Lack Professor. The role of the professorship, named for the Bloomberg Media Group chairman, focuses on the analysis of new business models for serious journalism in the years ahead. Carr, whose weekly “Media Equation” column is a must-read for media executives and editors and writers working in print and online, will continue to work at the Times.

Fiedler (COM’71) says he knew that Carr was the right person for the post when his name came up at a lunch meeting to discuss the professorship with Lack (CFA’68), William McKeen, a COM professor and chair of journalism, Christopher Daly, a COM associate professor of journalism, and Charles Kravetz, general manager of WBUR.

“The question we asked was, ‘What kind of person did we imagine would best fill the position?’” says Fiedler. “And the answer was, ‘Somebody who was on David Carr’s speed dial.’”

The professorship was created last year by Lack and a gift from the Sherry and Alan Leventhal Family Foundation. After the meeting, Lack made another lunch date, with Carr, and the two media bigfeet talked about how neatly Carr fit the Lack Professorship. Carr then contacted Fiedler and asked if it would be possible for the Lack Professor to maintain a job at the New York Times.

“We told him it would be better for everyone if he could do that,” says Fiedler. “This is the kind of course where David could walk in Monday and give a lecture based on his column that appeared in the Times that day.”

Carr says he hopes his efforts at BU will “make students a little wiser, and that BU students will make me a little smarter.” He will continue to work at the Times for the foreseeable future.

Fiedler says Carr will spend the spring semester developing his curriculum for two classes to be taught next year, one in the fall semester and one in spring 2015.

“One course will be straight-up media criticism and the other will be more of an exploration of the information economy by participating in it,” says Carr. “Students are going to have to make and distribute content of some form, although what that content will be is still up in the air.”

New York Times executive editor Jill Abramson says Carr “will be great,” and his professorship will benefit both his students and him. “He knows every aspect of the media and journalism,” says Abramson. “And he is a terrific speaker.” She says Carr will also discover some lessons similar to what she did when she first taught at Princeton in 2000. “That was when I first learned who Jon Stewart was,” she says. “David will learn more about how young people consume news and information. He will be the first one to learn who the next Jon Stewart is.”

Since he arrived at the New York Times in 2001, Carr has been a business reporter covering publishing, a general assignment reporter, and for the past eight years a media columnist. He attended the University of Minnesota, and is a former editor of the now-defunct Twin Cities Reader and the Washington City Paper. His memoir, The Night of the Gun: A reporter investigates the darkest story of his life. His own., chronicles his personal struggle with cocaine addiction and his recovery.

Carr says that when he arrives in Boston in January, he’s “going to work on fitting in, not sticking out.”

“When I do come up with a curriculum, I’m going to means-test it with my colleagues,” he says. “I want to take advantage of all the lessons they’ve learned that I don’t know anything about. I think of myself as a mid-career professional, and a significant part of the value I bring is because I remain in the narrative about what is going on in media now.

“At this point I don’t know enough what to dread,” he says. “I take students’ time and attention very seriously, and I hope they take my time and attention seriously. I don’t want the first semesters to be betas. I want them to drive value right away.”

David Carr of the New York Times to Join COM