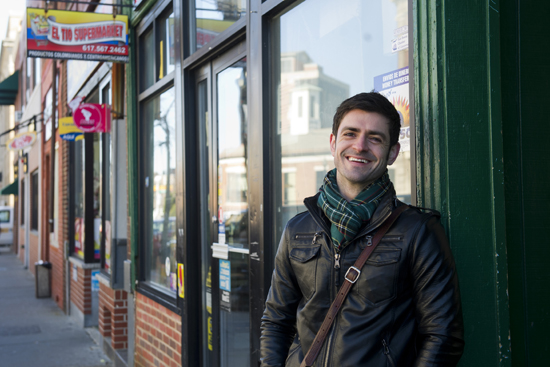 Danny Erker, in East Boston’s Maverick Square, has been visiting the city’s neighborhoods to recruit subjects for his linguistics research. Photo by Cydney Scott

Danny Erker’s interest in linguistics was piqued in an unlikely place: a grade school in Milwaukee, Wis., where he was teaching five- and six-year-olds how to play guitar, mandolin, and piano. The school served many bilingual children—the city has a large Mexican population—and Erker noticed that the kids preferred to speak Spanish with their parents, Spanish and English with one another, but only English with him, despite the fact that he is fluent in Spanish and conducted all of his parent-teacher conferences in the language.

“For them, the question was, your ethnicity, your identity—it isn’t consistent with my conception of who is supposed to speak Spanish,” says Erker, a College of Arts & Sciences assistant professor of Spanish and linguistics. “They had their own thought process and their own criteria for whom to speak what language to.”

The study of how language is used in a social context—the field of sociolinguistics—later became a focus of Erker’s research as a PhD candidate at New York University. Since then, he has been studying a range of questions about the US Spanish-speaking population. Where, when, and by whom is Spanish spoken? How does Spanish spoken in the United States compare to that of Latin American countries and Spain? Is the interaction of Spanish speakers with diverse linguistic backgrounds promoting the emergence of a Spanish that is unique to the United States?

The answers will matter. Of the 60 million people in the United States who speak a language other than English, about 40 million are Spanish speakers, according to the most recent US Census data. “People bring with them different varieties of a language,” Erker says. “So, among individuals from, say, Santo Domingo, Dominican Republic, Puebla, Mexico, and Bogotá, Colombia, you have a comparable range of variation to what you would find among English speakers from Austin, Tex., London, England, and Sydney, Australia, for example. All of these individuals are described as speaking English, but we all know that these varieties differ substantially, not only in terms of the way that they sound, but in terms of the words that people use to describe certain things.”

Erker has begun a pilot study in Boston to answer some of his questions about how Spanish is used in social contexts in large urban settings and how the language may be changing.

His subjects—40 in all for the pilot study—reflect the city’s demographics. They hail from Caribbean countries, including the Dominican Republic, Puerto Rico, and several countries in mainland Latin America, such as Colombia, El Salvador, Guatemala, and Mexico. Together these represent the six largest national groups of Boston Spanish speakers, and their time in the city ranges from a few months to an entire lifetime.

Erker interviews subjects in his lab at 718 Comm Ave and records them talking about a range of subjects: where they grew up, how long they’ve lived here, whether they watch TV in Spanish or English, whether they speak Spanish to their kids, their friends, and their boss. While the details of their answers are important, they aren’t the primary focus of the study. “We certainly care to the extent that it helps us understand who they are,” Erker says. “But honestly, if I talk for an hour with someone about baseball, it’s fine, because the data I need are all at the microlinguistic level.”

The data will come from his analysis of the structure of their speech—how they order their words and what words they use—and its acoustic properties.

Erker worked on similar research at NYU, where he and a team of linguists studied hundreds of hours of speech from more than 200 Spanish speakers—from places like Puerto Rico, Cuba, the Dominican Republic, Mexico, Ecuador, and Colombia.

They found that while the Spanish spoken in New York is still much like that spoken in Latin America, there are emerging differences. In some cases, they could track the obvious influences of English on the Spanish language. For example, the Spanish word for “rug” or “carpet” in most of the Spanish-speaking world is alfombra. But among many New York City Spanish speakers, the preferred word for rug is carpeta. “However, normative Spanish has the word carpeta,” Erker says, “but it means folder. What you find is that in varieties of Spanish that are under heavy contact with English, a word that already exists with one meaning takes on another, different meaning.”

The team also noted more subtle changes. “In English, if I say, ‘I sing,’ I can’t leave out the word ‘I,’” Erker explains. “In Spanish, you can say, ‘Yo canto’ or ‘Canto,’ and the message of both is still ‘I sing.’ The pronoun is optional from the perspective of the syntax. What one might expect is that if English is influencing Spanish, the bilinguals who grow up in New York City will use more of the optional pronouns while speaking Spanish than, say, their grandparents.” And that, he says, is precisely what they found.

The differences are statistically significant, Erker says, “so much so that we may just be witnessing the emergence of a new variety of the language, a so-called ‘New York Spanish,’ with its own vocabulary and grammar.”

His pilot study in Boston, which he expects will take six months, may reveal similar trends. “But,” he says, “because of the different populations that are present, they will take different shapes.”

The results will be important not just to the science of linguistics, Erker says, but as a practical matter. Spanish is the most rapidly growing language in the United States in terms of number of speakers, with 150 million by 2050, he says, “so, I think that something that linguists can do is help understand how that population uses Spanish. It’s a crucial part of our national identity.”

There are 3 comments on A Language Evolves