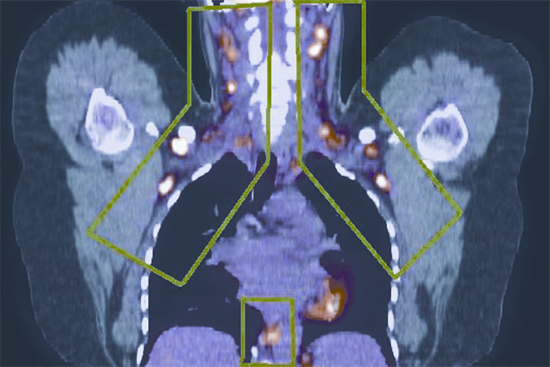 In part two of a four-part series on the nation’s obesity epidemic, BU Today spotlights the innovative research taking place at BU to better understand and solve this health problem.

It turns out that all fat is not created equal. Brown fat, named for its color and found in small amounts in strange places like our backs and necks, burns calories instead of warehousing them. Until three years ago, no one even knew adults had brown fat. Researchers had found it in rodents and human babies, both of whom cannot shiver (which burns calories) and therefore need brown fat as a heat-maker to stay warm. Then they studied scans of adults in cold rooms and voilà—grownups had brown fat, too.

So the purpose of brown fat is to help people to stay warm when it’s cold. But this calorie incinerator could be a potential weight-shedding wonder, too. Boston Medical Center’s Caroline Apovian and Megan Ruth find the potential so promising that Ruth and another colleague have pored over 1,100 PET scans—done at BMC between 2006 and 2009—to find appropriate subjects for research into brown fat.

Apovian—a School of Medicine professor and head of the BMC Nutrition and Weight Management Center—and Ruth, a BMC postdoctoral associate, are part of a team that devised a software program to quantify the amount of brown fat in the people who were scanned. They narrowed the field to 35 scans.

“What we’d like to do is figure out a way to activate that brown fat and have the white fat around it”—the ordinary kind—“make more brown fat,” says Apovian. She is hopeful that if they can trick the body into producing more brown fat, “people won’t have to exercise, which nobody seems to want to do.”

The work done by Apovian and her team complements research at the Dana-Farber Cancer Institute, where researchers engineered brown fat production in mice. They’re “doing work in animals. We do human research,” Apovian says.

The first step in cracking the riddle of how to make brown fat is pinpointing and measuring how much you have to begin with. Enter the computer program, which allows the researchers to measure brown fat in the scans without the aid of a radiologist.

The BU researchers are seeking funding for their next step, which will test their software program on actual subjects rather than scans. For the subjects, it will be, quite literally, chilling work: the researchers will make them cold—they may stand on an ice block or don a bomb deactivation suit filled with cold water—allowing the program to measure brown fat before and after the onset of cold. “The more obese you are, the less brown fat you have,” says Apovian. “The more brown fat you have, the more calories you can burn.…It seems that there’s more brown fat in lean people, and so our hypothesis is that that’s why they’re lean. But we don’t know that.” She says it could be six months before they have the money in hand to proceed.

It’s too soon for us to cancel our gym memberships, though. “In the next 10 years, we’re not curing the obesity epidemic,” Apovian says. “We don’t know enough about brown fat. We may find that we can’t activate it. We may find that we can activate it, but it doesn’t contribute that much, because there’s not a lot of it. We may find that it causes cancer. This is just at the very beginning stages. Maybe in 50 years, we’ll have found a way to turn white fat into brown fat so that you can eat whatever you want, eat junk food, and still stay lean. But not now.”

The project’s other researchers are Thomas Szabo, a College of Engineering research professor, Gustavo Mercier, a MED assistant professor, and Tyler Wellman (ENG’13).

Next, in part four of our series, “Exploring the Causes of Black Women’s Obesity.” Read the entire series here.

The Cure for Obesity: Fat?

There are 10 comments on The Cure for Obesity: Fat?