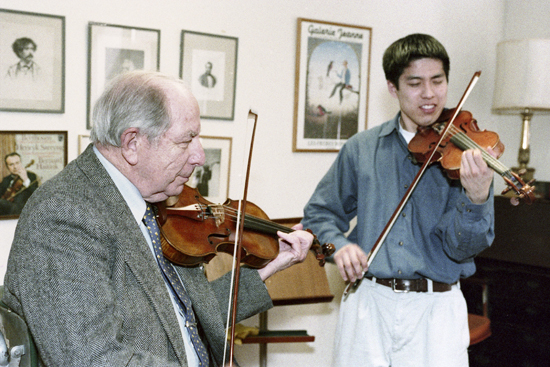 Just days before his death Tuesday morning, 101-year-old Roman Totenberg lay in bed at his Newton home, listening to a student play the Brahms violin concerto. “Slow down,” he told her, according to a blog entry yesterday by S. I. Rosenbaum on the Boston Phoenix website. Suffering kidney failure, his voice just a whisper, the famed violinist spent his final hours doing what he loved most: teaching.

Born in Warsaw in 1911, Totenberg, a College of Fine Arts School of Music professor emeritus, had been a constant and inspiring presence in classical music over the past century, having worked closely with many well-known composers, including Samuel Barber, Igor Stravinsky, Aaron Copland, Paul Hindemith, and Darius Milhaud, and musicians and conductors, among them Fritz Kreisler, Arthur Rubinstein, Leopold Stokowski, and Pierre Monteux. Totenberg was featured on hundreds of recordings, had appeared with most of the renowned orchestras of the world, and had performed in recital at Carnegie Hall, the New York Metropolitan Museum of Art, the White House, the Library of Congress, and Queen Elizabeth Hall in London.

The child prodigy, whose playing helped feed his family in war-torn Russia, grew up to perform with most of the world’s top orchestras, record now-standard renditions of Bach and Brahms concertos, and collaborate with composers such as Barber and Leonard Bernstein. Totenberg, who joined the BU faculty in 1961, began his career at the University teaching violin and later chaired the string department. Even after leaving his full-time post 50 years later, he never stopped teaching. “There’s a great satisfaction in teaching,” the soon-to-be centenarian said last year. “You learn a lot more than the students do.”

The longtime Newton, Mass., resident had an illustrious concert career, making his debut with the Warsaw Philharmonic at age 11 and going on to win the Wieniawski Medal of Poland and the Ysaye Medal of Belgium, the Mendelssohn Prize (Berlin Academy), and BU’s Metcalf Cup and Prize, the University’s top teaching honor, in 1996. He was named Artist Teacher of the Year in 1981 by the American String Teachers Association.

“A survivor of two world wars, Roman Totenberg offered the world hope and love through his extraordinary music-making,” says Benjamin Juarez, dean of the College of Fine Arts. “His legacy is a testimony to the power of human strength and resilience. Throughout our long and wonderful relationship with him, he always kept BU and its students in his heart.” Calling Totenberg “a unique and generous artist and human being,” Juarez says that Totenberg was more than a mere virtuoso: “He was a true global citizen who bridged three centuries with his artistry and teachings.”

“Roman Totenberg lived a very long, very rich, and full life, and it’s been our great privilege to have had a long association with him to the very end,” says Robert Dodson, director of the School of Music. “One of the unexpected joys of coming to BU has been getting to know this legendary figure in the world of string playing. It was a joy to be able to have some quality time with him.”

Totenberg formed lifelong relationships with his students, ushering many into stellar performing careers of their own. Mira Wang (CFA’89,’92) was 16 when she met Totenberg in Poland, where the renowned violinist was judging a competition of young violinists. The girl from China was struck by the kindness of the Polish-born virtuoso and soon wrote to ask if she could study with him in the United States. For the next six years, Totenberg was Wang’s teacher at CFA and beyond, and he welcomed the young musician into his home and family, where she became like another daughter. Wang and her husband, cellist Jan Vogler, were among those honoring Wang’s mentor and dear friend at a Boston Symphony Orchestra concert in April 2010 with the world premiere performance of a piece commissioned specially for the event, Double Concerto for Violin and Cello by John Harbison.

In November that year, again at Symphony Hall, the College of Fine Arts celebrated Totenberg’s 100th birthday with a concert by the Boston University Symphony Orchestra, A Centennial Celebration of Roman Totenberg.

Totenberg attended the concert with family, friends, and former students, many of whom are among today’s leading concert artists, including Wang, Na Sun, a violinist with the New York Philharmonic and Ikuko Mizuno (CFA’69), a Boston Symphony Orchestra violinist. Proceeds from the concert benefited the Roman and Melanie Totenberg String Scholarship Fund for outstanding young musicians. Melanie Shroder Totenberg, who died in 1996, was her husband’s business manager for half a century.

“I think that all three of us would say we were extraordinarily lucky to have him as our father,” says Jill Totenberg (CAS’69), one of their three daughters. “He was the most supportive, nonjudgmental, uncomplicated, loving parent anyone could hope for.” Growing up in the Totenberg family was a great gift, Jill Totenberg says. “It was a life in which we were surrounded by music all the time, a life in which music was the essence of who we were.”

In addition to Jill Totenberg, who heads the Totenberg Group, a New York–based communications and marketing firm and is a consultant to Kenneth Freeman, Allen Questrom Professor and Dean of the School of Management, Totenberg leaves daughters Nina Totenberg (COM’65, Hon.’11), longtime legal correspondent for National Public Radio, and Amy Totenberg, a U.S. District Court judge for the Northern District of Georgia. The family will hold a memorial service in Boston in June or September, according to Jill Totenberg. BU Today will provide details of the service when they become available.

“When we have his memorial service, the music will be so much a part of who he was,” says Nina Totenberg. “And we will all cry.”

Hear more of Nina Totenberg’s memories about her father here.

Patrick L. Kennedy contributed to the reporting for this story.

There are 7 comments on Roman Totenberg Dies at 101