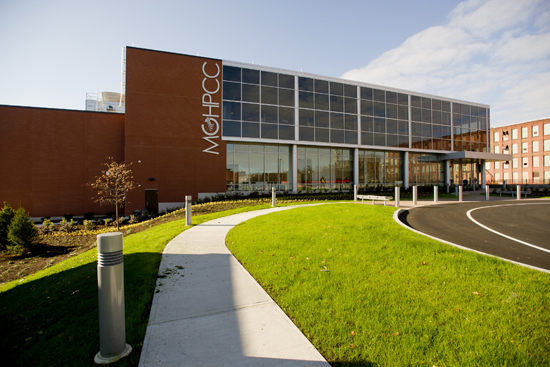 So many machines, so few people.

Ultimately, 20,000 computers will fill an almost acre-sized floor of the Massachusetts Green High Performance Computing Center (MGHPCC). Yet just 10 or so workers have day jobs at the center, which opened earlier this month after BU, four other Bay State research universities, state taxpayers, and business partners poured almost $95 million and two years into its construction.

The hardware-to-human ratio highlights the nature of business at the 90,300-square-foot building approximately two hours west of Boston, in Holyoke, Mass., one of the largest supercomputing data centers east of the Mississippi River. Its computers will be accessed remotely for the most part by researchers at BU and its partners, working from their campuses. But unlike The Terminator’s vision of a dystopia where machines control mankind, the center exists to harness machines to human ends—specifically, to accommodate the five universities’ mushrooming computing needs.

“Some equipment will be general-purpose clusters available to all researchers at BU,” says Azer Bestavros, a College of Arts & Sciences computer science professor, director of the Rafik B. Hariri Institute for Computing and Computational Science & Engineering, and cochairman of the MGHPCC education and outreach committee. “Other equipment will be more special-purpose, and thus dedicated to specific research.” For example, he and seven BU colleagues have received a National Science Foundation grant to purchase, in tandem with several other universities, a computing cluster to be housed at Holyoke and linked to each member school. Research like this propelled BU’s admission this month to membership in the Association of American Universities, only the fourth school since 2000 invited into the elite research consortium.

In the next few months, the first computers will be installed, making the trip from the center’s loading dock up its six-ton-capacity freight elevator and into that sprawling computing room. Some will be relocated from the five campuses, freeing up space on each. (At BU, that will include space at 881 Commonwealth Ave., 111 Cummington Mall, the Physics Research Building at 3 Cummington Mall, and various schools’ data centers.) Others will be replaced altogether.

Center executive director John Goodhue guided a recent media tour around the austere corridors and cavernous rooms with their factory-like floors, explaining things as adroitly as a seasoned professor, although he’s actually a refugee from Cisco and various computer companies. The electric room has “the equivalent of the fuse box in the basement of your house,” he said, except that the fuses weigh 300 pounds each. The center will make 10 megawatts of energy a day available for computing, which is enough to run up to 10,000 homes.

The MGHPCC was designed as an environmentally benign computing colossus. Outside, most of the building is a huge rectangle, fronted by towering windows, in a neighborhood of old brick factories. A canal off the Connecticut River meanders by the property, hinting at one of its green aspects: more than 70 percent of the local electricity supply comes from renewable hydroelectric power. The building also meets green building standards, courtesy of its efficient power system and conservation measures.

For example, the electric room’s equipment can function under high temperatures, obviating the need for power-gulping air conditioning. The building’s electric system was installed directly under the computing floor, with shorter wires that minimize wasteful loss of electricity. The average data center requires nine megawatts of power for cooling, Goodhue said; MGHPCC will require less than three, partly by tapping the outside air in winter to cool the computers.

Half the computing floor is lined with black phone booth–sized cabinets, each built to hold about 30 computers. The other half is wide open for expansion and more computers, as is the entire nine-acre property, which has space for additional buildings as needed.

The center devotes an entire corridor to telecommunications equipment—“Computing doesn’t really make any difference unless you can tell people the answer,” noted Goodhue—including a dedicated link to every university in the consortium and thousands of sensors monitoring things from energy efficiency to smoke in the building. Dubbing this corridor “the building’s mouth and ears,” Goodhue said that the “goal is to make all the users of the machines feel like this building is just another building on their campus. The way we do that is by making sure we have very fast, very reliable communication to all of the users.”

BU’s academic partners in the center are Harvard, MIT, Northeastern, and the University of Massachusetts. The state contributed $25 million to the construction, reflecting “what is possible when government, academia, and business work together,” Governor Deval Patrick said. The center “will serve as an economic development model for the state and the nation for generations to come.” Additional funding came from EMC Corporation and Cisco Systems.