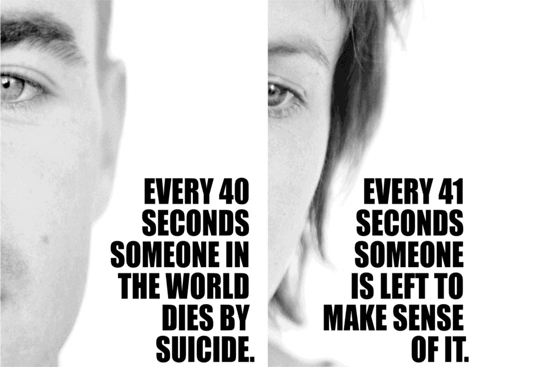 BU is hosting the American Foundation for Suicide Prevention’s 14th Annual International Survivors of Suicide Day at the Photonics Center on Saturday.

“It was definitely one of those situations that could either destroy a family or bring it together,” says Dinoto, a collections specialist in the Office of the Comptroller. “With the first one, it definitely destroyed some relationships. With the second one, for my immediate family, it brought us closer. We just looked at each other and said, ‘We’re still here and we still have to go on and take care of each other.’”

To cope with her loss and help others in similar situations, Dinoto teamed with Dori Hutchinson (SAR’85,’96), a Sargent College clinical associate professor and director of services at BU’s Center for Psychiatric Rehabilitation, to organize the American Foundation for Suicide Prevention’s 14th Annual International Survivors of Suicide Day this Saturday, November 17. Counseling professionals and survivors will address attendees, who will then break into groups to discuss their own experiences with surviving loss. The event is being held at the Photonics Center from 9:30 a.m. to 2 p.m.

Dinoto hopes the event will create a safe environment to talk about suicide and its aftermath.

Every 14 minutes, someone in the United States dies by suicide, making it the 10th leading cause of death among Americans, according to 2010 data from the Centers for Disease Control and Prevention. Behind accidents, it’s the second leading cause of death among college students, Hutchinson says. And while the rate of suicide has been steadily increasing since 2000, it quadrupled during the Great Recession, from 2008 to 2010, according to medical journal The Lancet.

Hutchinson says suicide’s prevalence among college students stems from rising levels of stress. Students worry about their financial debt and their need to perform academically. They can also be stressed by a sour relationship, they may be abusing alcohol or drugs, or they may be worried about problems back home. Some also may be dealing with mental illness, which often doesn’t develop until the late teens or early 20s. Nearly 30 percent of college students reported feeling “so depressed that it was difficult to function,” according to the American College Health Association National College Health Assessment in 2009. And depression is often an underlying factor in suicide. According to the CDC, 90 percent of those who commit suicide have a diagnosable and treatable psychiatric disorder at the time of their death.

“College kids and teenagers can’t see that it gets better,” Hutchinson says. “They don’t have a lot of life experiences to draw on to know you can go through something horrible and come out on the other end. They don’t know that, and they can’t tolerate that suffering.” That’s why students need to know that we’re here, she says. “We want to talk to you. We want to be responsive, because it will get better.”

In 2010, she and Larry Kohn, director of development at the Center for Psychiatric Rehabilitation, landed a $300,000 Garrett Lee Smith Suicide Prevention Grant, which was matched by BU, to train students to recognize depression among peers and to educate parents about how they can best support their distressed students. So far, they’ve trained more than 1,000 students. The center also counsels at least 50 students for mental health issues yearly.

In the wake of a suicide, families go through a range of emotions. Dinoto’s family experienced disbelief, guilt, anger, shame, and fear after each loss. She says her mother, who lost her only two siblings, often wondered if she could have saved her first brother. “She knew about his alcoholism and that he was struggling,” Dinoto says, “but I don’t think it crossed her mind that it would lead to suicide.”

The death of Dinoto’s second uncle was different; she and her mother fully expected it. “It’s kind of like dealing with someone with a terminal illness or cancer,” she says. “You just have this sense that they’re not going to make it. Death comes as sort of a relief because you’ve been through all their struggles.”

One thing that hastened Dinoto’s healing process, she says, was being able to share her story. She hopes more people will follow suit.

The American Foundation for Suicide Prevention’s 14th Annual International Survivors of Suicide Day will be held Saturday, November 17, from 9:30 a.m. to 2 p.m. at the Photonics Center, 8 St. Mary’s Street, Colloquium Room, ninth floor. Registration is recommended, but not required. The event is open to the public; $5 for students, $15 for adults. For more information, contact Dori Hutchinson at 617-353-3549 or email dorih@bu.edu.

Survivors of suicide looking for additional resources can turn to the Samaritans, the American Foundation for Suicide Prevention, Families for Depression Awareness, and Active Minds, which has a BU chapter.

There are 10 comments on For Suicide Survivors, Sharing Heals