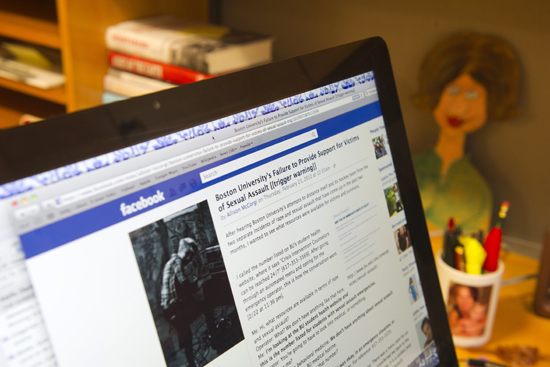 What happened next alarmed and disturbed her. In a Facebook post that Francis (COM’11) made the next morning, she reported that when she asked what resources were available in terms of rape and sexual assault, a male operator told her that there were no services for sexual assault or rape victims at that number. Francis writes that without asking about her well-being, the man then gave her a phone number for BU’s general medical hotline, which led her to an automated menu with an option for sexual assault emergency. That option, in turn, led her back to the first number she had called.

“It was a useless loop of automated menus that provide no real resources or response to sexual assault,” she wrote. “Boston University has neither an emergency support system for victims of sexual assault nor staff members trained in responding to rape crisis situations.”

Within hours, Francis’ post went viral. By noon on Friday, at least 150 people had shared it. Francis also wrote about her experience on her blog, Sparkle All Day, and via her Twitter account, @silverspeakers.

The system glitch, which elicited more than 40 comments on Facebook, troubled more than Facebook readers. David McBride, director of Student Health Services, was deeply distressed, as well as perplexed. On Thursday, McBride posted to Francis’ Facebook account, acknowledging that she had been given misinformation by the operator and apologizing to anyone affected by the error.

McBride says he quickly clarified the protocol and available services with the answering service verbally and in writing. He says Boston University has a very well developed system for addressing the needs of survivors of all crimes, including sexual assault.

“The irony in this situation,” says McBride, “is that this is something that our crisis counselors Beth Kozik and Maureen Mahoney do all the time. This person was looking for information, and was digging to see how the system responded. Unfortunately, in this situation it didn’t work. There are countless situations that go well and students get the care that they need.”

Margaret Ross, director of SHS Behavioral Medicine, says that as a result of the incident, the protocol now explicitly directs the answering service to first inquire as to the safety and well-being of the caller. At the mention of sexual assault, the service then immediately pages the on-call crisis intervention counselor, who then contacts the caller directly.

The crisis hotline gets dozens of calls each year from students who have been sexually assaulted. They are connected with crisis counselors, whose job—among many others—is to visit the emergency room with victims, provide them with counseling, and make sure they receive information on off-campus resources.

McBride explains that there are two phone numbers for after-hours help, and they are rerouted to separate, private answering services in Massachusetts. The main SHS line (617-353-3575) attends to general medical emergencies and includes an option that sends callers to a crisis hotline in case of sexual assault. That crisis hotline number is the same as the BU Behavioral Medicine line (617-353-3569), which is answered by an operator who records students’ contact information and medical concerns. The operator then pages a University mental health clinician, who contacts the student directly. In cases of sexual assault, says McBride, one of two BU crisis counselors is pulled into the loop.

McBride says the wife of an SHS staff member successfully tested the system Thursday night to ensure she was routed to a clinician when she claimed to have been sexually assaulted. And additional anonymous tests are planned for the future. He also says the University is negotiating with another company that would merge the separate after-hours lines.

The SHS director acknowledges that his office is understaffed and says that having more hands on deck would help, but that he doesn’t see the University swapping its after-hours answering service for the more expensive services of a clinician answering the phone around the clock. “Most medical offices and student health centers that have after-hours coverage use an answering service to relay information from callers to the clinician on call,” he says.

Gina Scaramella, executive director of the Boston Area Rape Crisis Center, says her office offers an after-hours crisis hotline, adding that schools can contract with the center to handle such crisis calls. Among local colleges, however, Harvard is the center’s only client.

In a Friday posting on Facebook, Francis urged the BU community to “put pressure on BU to increase support to Student Health Services and the Center for Gender, Sexuality, and Activism so they can more adequately provide the sexual assault resources they strive to.”

Ariana Katz (CGS’10, CAS’12), codirector of the BU Center for Gender, Sexuality, and Activism, shares office space and often interacts with crisis counselors and says she’s heard only positive things about their work.

Still, Katz’s center issued a press release on Thursday calling for the BU administration to hire an additional full-time staff member to work with rape and sexual assault survivors, to implement mandatory training for coaches, athletes, faculty, and student leaders through the Boston Area Rape Crisis Center, and to initiate a zero-tolerance policy for convicted perpetrators of rape and sexual assault that would require immediate and permanent expulsion from the University.

“Allison Francis saw something symptomatic of a larger problem,” Katz says. “We’re seeing sexual assault not as an individual occurrence, but a larger issue. And we’re not going away.”

Francis seconds the center’s recommendations. “We can’t just end the conversation here,” she says. “It’s not as if a post on the Student Health website is enough to make this all okay.”

“It’s critical that all students feel safe and cared for,” says Ross. “We want students to realize that there is help available, 24/7, 365 days a year and that there is a medical clinician, an administrator, a crisis intervention counselor, and a Behavioral Medicine clinician on call at all times.”