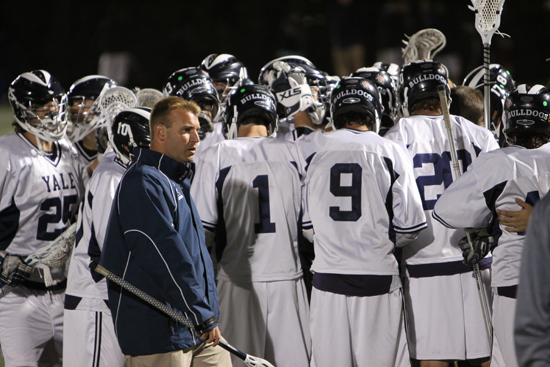 Polley comes to BU from Yale University, where he spent the last six seasons as an assistant coach, heading up the team’s defense for the past four. He helped the Yale Bulldogs claim the Ivy League tournament title this spring, with wins over lacrosse powerhouses Princeton and Cornell, earning the team its first NCAA bid since 1992. The Bulldogs finished the year ranked 11th in the final United States Intercollegiate Lacrosse Association Division I poll.

“It is with great pleasure that I welcome Ryan Polley to Boston University as our first varsity men’s lacrosse coach,” says Michael Lynch, an assistant vice president and director of athletics. “His head coaching experience along with his efforts in pushing Yale to the top of the Ivy League made him a fantastic candidate. After learning more and more about him, it was easy to recognize that he’s the right choice to get our program off and running.”

BU currently has a club team, which plays in the Men’s Collegiate Lacrosse Association’s Pioneer Collegiate Lacrosse League, finishing this past season with a 2-10 record. Lacrosse was officially designated as a club sport in 1972, but has been played at the club level on campus since the 1920s.

Polley will spend the coming year recruiting athletes and building a varsity team, which will begin play in the Patriot League during the 2013–2014 academic year. The new team will compete against teams from Bucknell, Colgate, Holy Cross, Lafayette, Lehigh, Navy, and West Point.

The new BU coach graduated from Merrimack College in 1999, where he was an All-American lacrosse player and a two-time All-Northeast-10 selection. He went on to serve as head coach of the Merrimack Warriors for three seasons and was twice named the New England Division II Coach of the Year.

Since taking over the reins of Yale’s defense, Polley helped the Bulldogs to three 10-win seasons in a row, starting in 2010, when they earned a share of the Ivy title for the first time since 1990 and were the top-ranked team in New England. Under his direction, five of this past season’s players received All-Ivy recognition, with three earning All-America honors. The 2011 Yale squad ranked seventh nationally in scoring defense and third in caused turnovers.

Now, with the opportunity of leading his own team—and building it from the ground up—the experienced coach says he is ecstatic about coming to BU.

“From the moment I walked on campus, I was impressed by the energy and the love that everyone had for BU,” Polley says. “I know it’s going to be a big challenge, especially in the Patriot League, but BU is well-positioned to attract the highest caliber student-athletes with its resources, its stellar academic reputation, and its location. I’m very appreciative of Mike Lynch and Drew Marrochello, deputy director of athletics, and I’m grateful for this amazing opportunity.”