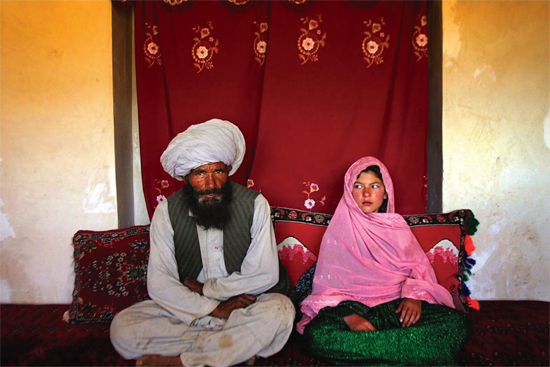 The forced marriage of children to men in the developing world is the subject of a two-day symposium at BU. Photo by Stephanie Sinclair

How much would you pay for a female child?

The question assaults our sense of decency, but it describes a true-life transaction throughout the developing world, where, by one estimate, one of every seven girls younger than 15 (outside China) is peddled into marriage with an older, sometimes middle-aged man—and “the younger the bride, the higher the price she may fetch,” notes the New York Times. The College of Communication and the School of Public Health are cosponsoring a talk tonight at the Boston Public Library by journalists who’ve investigated the problem.

Child marriage, often illegal in countries where it occurs, affects millions of girls and “extracts an enormous toll through lost education, social isolation, and deaths during labor and delivery by mothers who are often children themselves,” say the event’s organizers. Its purpose varies, from protecting a girl’s virginity in cultures where sex outside marriage is abominated to settling a debt or a feud, according to a June National Geographic report.

That story’s author, Cynthia Gorney, will be among the panelists at tonight’s discussion, Child Brides: The Health and Human Consequences of Marrying Too Young. Joining her will be Stephanie Sinclair, who photographed her story, and Hanna Ingber Win and Anna Tomasulo (SPH’11), who covered the consequences of child marriage in Nepal for the Washington-based Pulitzer Center on Crisis Reporting, another sponsor of tonight’s event. Tomasulo wrote about her findings for the Huffington Post.

The panelists will also be at the Medical Campus tomorrow at a forum exclusively for BU students. They will be joined by students of Monica Onyango (SPH’99), an SPH clinical assistant professor of international health, who have researched the problem of child brides in Ethiopia.

The Pulitzer Center is spotlighting child brides this year, says Anne Donohue (COM’88), a COM associate professor of journalism. “Their mission is to shed light in dark places,” she says, “to cover stories that are often forgotten in the daily news grind.”

Jonathon Simon, director of the BU Center for Global Health and Development, the fourth cosponsor, will speak tonight about the public health aspects of the problem. The panel is the second in a recurring series begun earlier this year, when the sponsors hosted journalists and public health workers involved in responding to disasters.

Simon hopes the audience takes away an understanding of the roles of journalism and public health responders in addressing the problem of child brides. “Our professions have much in common, up to a point, and also plenty of tension,” he says, and the forum will spotlight those points to show how collaboration could improve.

Next up: a planned symposium on Civilian Victims of War, which the organizers hope to present in March, says Elizabeth Mehren, a COM professor of journalism, one of the organizers.

Child Brides: The Health and Human Consequences of Marrying Too Young is being held tonight, November 3, at the Boston Public Library, 700 Boylston St., Copley Square, from 5:30 to 7 p.m. Tomorrow’s forum is at the Medical Campus auditorium, 670 Albany St., from 9:30 a.m. to noon.

There are 2 comments on Trauma of Child Brides Explored Tonight