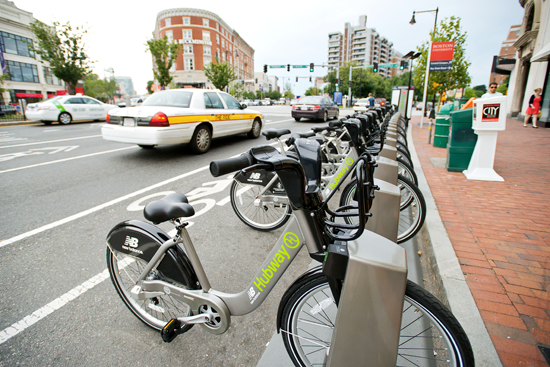 Anyone navigating Commonwealth Avenue knows it’s a circus. Cars, trucks, bikes, trolleys, and pedestrians barrel along and skitter across the four-lane divided avenue that is the pulsing artery of the Charles River Campus.

So it seems counterintuitive to add one more element to that mix. But, voilà: New Balance Hubway. Launched at the end of July, Boston’s new bike-share program is already being hailed as a success, with 2,600 members and 600 bikes at 53 stations around the city. Three of those stations are along Comm Ave, with another in South Campus and one on the Medical Campus. (An additional eight stations are planned in Boston, with more to come in Cambridge, Somerville, and Jamaica Plain).

Whether hopping from FitRec to class in East Campus or taking a more scenic route to downtown Boston, the bikes promise a cheap and easy transportation alternative for the BU community 24 hours a day, 7 days a week, 3 seasons of the year. (Hubway will hibernate December through February, to reemerge with the nicer spring weather.)

That sounded to me like a deal too good to be true. So I decided to test it out. Here’s a recap of my inaugural Hubway adventure.

I arrive at Marsh Plaza, site of one of the Comm Ave Hubway stations, to find 7 of 19 bikes docked in a stand alongside a kiosk and a city map. Sidling up to the kiosk, I read the company’s three cardinal rules before slipping my credit card into the machine.

Hubway does not provide helmets at any rental station. Riders should come with their own helmet or visit a nearby store (clearly marked in red on kiosk maps), where they can buy a discounted one for $10 or less.

Hubway posts multiple signs online and at their kiosks encouraging riders: “Wear a helmet.” Yet, among the other Hubway riders I came across that day, I was the only one sporting headgear. (A red helmet with a Boston University Terriers patch, no less.)

Riders can choose from three membership options. I select the 24-hour membership for $5. (That’s not including usage fees. More on that later.) Other options include a three-day rental for $12 or a $60 annual membership, available through online registration, after which a Hubway key is sent to your home.

The kiosk’s touch screen prompts are user-friendly, and I grab a printed copy of my unlocking code within minutes. (Still, during that short period, two more bikes were swept away by key-toting members.) I choose one of the remaining bikes and punch my five-digit code into the parking dock. A green light flashes, I pull my bike away from the dock, and I’m ready to roll.

Before taking off, I check out my two-wheeler. It has fat tires, a wide and cushiony seat, front and rear flashing LED lights, wheel reflectors, and a front basket with a bungee cord—a big bonus for anyone toting backpacks, briefcases, or purses. There’s a bell attached to the left handlebar and a three-gear shifting system built into the right handlebar.

My bag securely fastened, I head east on Comm Ave toward the closest Hubway station, at Kenmore Square. It’s a beautiful day for a bike ride. The late summer sun shines warm and bright. Traffic is light in the pre–student move-in lull. And…why does it feel like I’m riding sidesaddle? Note to self: adjust seat before hopping on bike.

I make it to Kenmore Square in well under half an hour, which means my ride is free. More than 30 minutes and I would have started racking up a bill. The rate is reasonable at first—$2 for up to an hour ($1.50 for members)—but jumps rapidly later on to $38 for three hours ($30.50 for members) and $100 beyond seven hours ($80 for members). Hubway acknowledges that its bikes are best for short trips and advises riders to visit a bike rental shop for extended, open-ended rides.

I snap my bike into the dock and see the green light flash again, meaning I’m good to go. A quick errand later, I’m back at the station ready to rent my next bike. Among the 19 spots, 6 bikes remain. One of them needs a little TLC. Its pedal is perched atop the dock waiting to be reattached. I press a red service button to alert Hubway staff of the needed repair.

On a tip from a rider visiting from Los Angeles, I insert my card into the kiosk again to receive a new unlocking code (they expire after each use), select a bike, and head toward the Public Garden.

My ride along Comm Ave toward downtown is smooth (I adjusted the seat this time), except for a driver yelling advice at me through her car’s open window: “Bikes go on the other side.” Insert “idiot” at the end. Oops. Right-o.

Less than 30 minutes later, I park my bike at Hubway’s dock on the Public Garden’s south side, and another errand later, am ready to pick up my third bike. By this time, I feel like a Hubway pro. I slide my card, go through the prompters…then hit a roadblock. “Sorry, the maximum number of concurrent bikes you can rent has been reached,” the touch screen tells me. No sweat, I’ll just stroll to the next station, two blocks down at Berkeley and Boylston streets.

But I’m out of luck—the station is completely empty of bikes. I decide to walk another two blocks to the Copley Square station. My heart beats a tick faster as I catch sight of the dozens of tourists swarming the area and contemplate how many are simultaneously zeroing in on that same Hubway station. My pace increases. And then, salvation. The station has four bikes left. While two tourists hover around the parked bikes, I swipe my card again. The same rejection message appears.

Time to call in the reinforcements. A Hubway customer service representative answers my call (1-855-4HUBWAY) within 30 seconds. With only my last name and the final four digits of my card, he fixes the problem and gets me back on another bike.

All along Newbury Street and Comm Ave, habitual bikers whiz by me, their backdraft mocking my steady, but slower, speed. Hubway bikes are made for heavy-duty use by people of all skill levels—more like beach cruisers than speed racers, so I enjoy the sights. The Citgo sign looms as I cross back onto campus. By now my legs are burning, the setting sun is striking me squarely in the eyes, and I’m going uphill to my last stop: FitRec.

I pull up to the station and scan the docks for an opening. The very last slot, camouflaged by the Hubway map, is open. Eureka! I dock my bike after another free ride and silently wish those bikers arriving after me good luck. They can swipe their card to get a free 15-minute extension on their rental, but they’ll still have to search for the nearest empty station—not exactly convenient if you’re a student and have just 30 seconds to get to your next class. Riders might want to consider using the smartphone Spotcycle App to find an open dock in those situations.

So, lessons learned: visit Hubway’s site beforehand, bring a helmet and a cell phone, and don’t rely on these bikes if you’re on a tight schedule. I wasn’t, so I chalked it up as another urban adventure.

There are 12 comments on Test-Driving Hubway