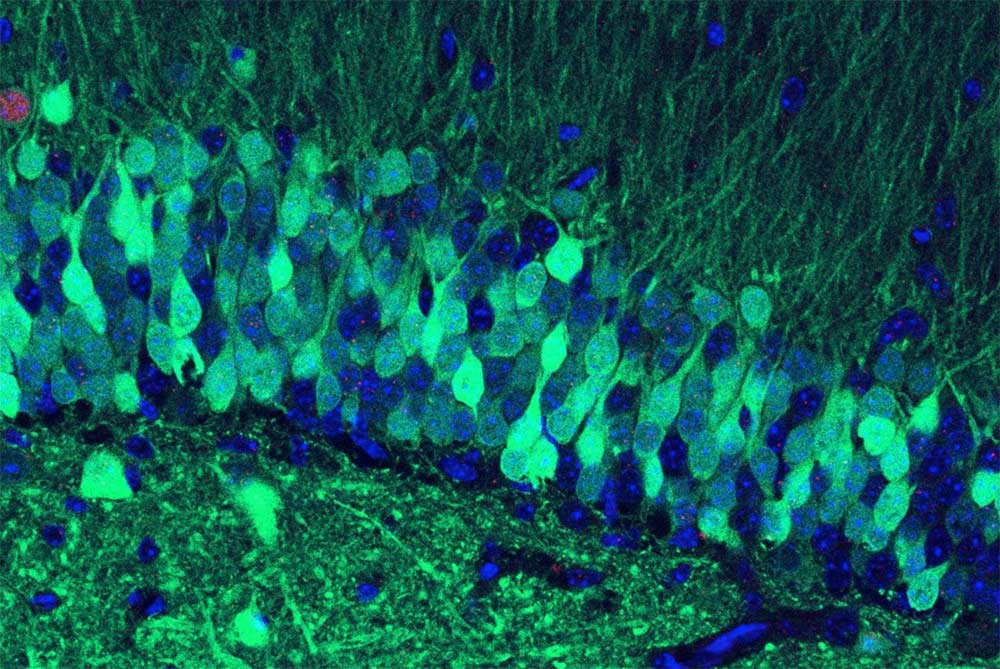 This is what a bad memory looks like in a mouse brain. The cells glowing green indicate that they are being activated in storing a fear memory. Courtesy of Stephanie Grella and the Ramirez Group at Boston University

What if scientists could manipulate your brain so that a traumatic memory lost its emotional power over your psyche? Steve Ramirez (CAS’10), a Boston University neuroscientist fascinated by memory, believes that a small structure in the brain could hold the keys to future therapeutic techniques for treating depression, anxiety, and PTSD, someday allowing clinicians to enhance positive memories or suppress negative ones.

Inside our brains, a cashew-shaped structure called the hippocampus stores the sensory and emotional information that makes up memories, whether they be positive or negative ones. No two memories are exactly alike, and likewise, each memory we have is stored inside a unique combination of brain cells that contain all the environmental and emotional information associated with that memory. The hippocampus itself, although small, comprises many different subregions working in tandem to recall the elements of a specific memory.

Now, in a new paper in Current Biology, Ramirez, a BU College of Arts & Sciences assistant professor of psychological and brain sciences, and a team of collaborators have shown just how pliable memory is if you know which regions of the hippocampus to stimulate—which could someday enable personalized treatment for people haunted by particularly troubling memories.

“Many psychiatric disorders, especially PTSD, are based on the idea that after there’s a really traumatic experience, the person isn’t able to move on because they recall their fear over and over again,” says Briana Chen, first author of the paper and a Columbia University graduate researcher studying depression.

In their study, Chen and Ramirez, the paper’s senior author, show how traumatic memories—such as those at the root of disorders like PTSD—can become so emotionally loaded. By artificially activating memory cells in the bottom part of the brain’s hippocampus, negative memories can become even more debilitating. In contrast, stimulating memory cells in the top part of the hippocampus can strip bad memories of their emotional oomph, making them less traumatic to remember.

Well, at least if you’re a mouse.

Using a technique called optogenetics, Chen and Ramirez mapped out which cells in the hippocampus were being activated when male mice made new memories of positive, neutral, and negative experiences. A positive experience, for example, could be exposure to a female mouse. In contrast, a negative experience could be receiving a startling but mild electrical zap to the feet. Then, identifying which cells were part of the memory-making process (which they did with the help of a glowing green protein designed to literally light up when cells are activated), they were able to artificially trigger those specific memories again later, using laser light to activate the memory cells.

That distinction, Ramirez says, is critical. He says that it suggests suppressing overactivity in the bottom part of the hippocampus could potentially be used to treat PTSD and anxiety disorders. It could also be the key to enhancing cognitive skills, “like Limitless,” he says, referencing the 2011 film starring Bradley Cooper in which the main character takes special pills that drastically improve his memory and brain function.

“The field of memory manipulation is still young…. It sounds like sci-fi but this study is a sneak preview of what’s to come in terms of our abilities to artificially enhance or suppress memories,” says Ramirez. Although the study got its start while Chen and Ramirez were both doing research at Massachusetts Institute of Technology, its data has been the backbone of the first paper to come out of the new laboratory group that Ramirez established at BU in 2017.

“We’re a long way from being able to do this in humans, but the proof of concept is here,” Chen says. “As Steve likes to say, ‘never say never.’ Nothing is impossible.”

“This is the first step in teasing apart what these [brain] regions do to these really emotional memories…the first step toward translating this to people, which is the holy grail,” says memory researcher Sheena Josselyn, a University of Toronto neuroscientist who was not involved in this study. “[Steve’s] group is really unique in trying to see how the brain stores memories with the goal being to help people…. They’re not just playing around but doing it for a purpose.”

Although mouse brains and human brains are very different, Ramirez, who is also a member of the BU Center for Systems Neuroscience and the Center for Memory and Brain, says that learning how these fundamental principles play out in mice is helping his team map out a blueprint of how memory works in people. Being able to activate specific memories on demand, as well as targeted areas of the brain involved in memory, allows the researchers to see exactly what side effects come along with different areas of the brain being overstimulated.

“Let’s use what we’re learning in mice to make predictions about how memory functions in humans,” he says. “If we can create a two-way street to compare how memory works in mice and in humans, we can then ask specific questions [in mice] about how and why memories can have positive or negative effects on psychological health.”

This work was supported by a National Institutes of Health Early Independence Award, a Young Investigator Grant from the Brain and Behavior Research Foundation, a Ludwig Family Foundation Grant, and the McKnight Foundation Memory and Cognitive Disorders Award.