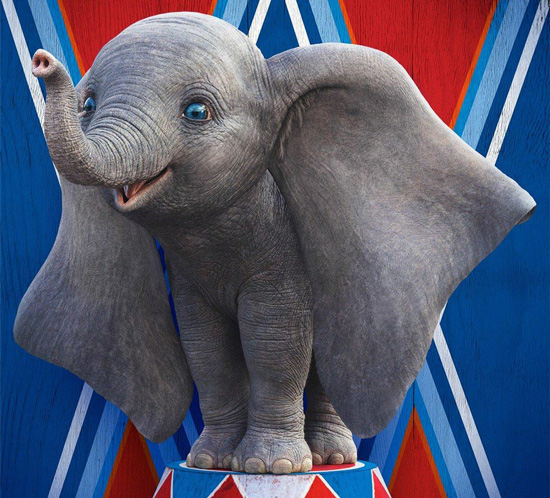 Fans of Disney Studios 1941 animated classic film Dumbo, about a baby elephant who can fly thanks to his oversize ears, have been awaiting today’s nationwide opening of the live-action remake. The new Dumbo stars Colin Farrell and Danny Devito, with Michael Keaton and Eva Green as the villains, and offers new characters, plot twists, and backstories. But at its heart, the remake, like the original, is about an adorable baby elephant who is ostracized because of his big ears, but discovers that they enable him to fly. The new film is expected to pull in as much as $58 million in domestic box office receipts opening weekend, drawing fans of the original film as well as new generations.

In a BU Today tradition, we posted a trivia contest this morning, Friday, March 29. When it ended at 1 pm, we entered the names of everyone who had answered all the questions correctly in a drawing for two free tickets to a 3-D screening tonight at 7 pm, at AMC Boston Common 19, 175 Tremont St.

1. Which Oscar-nominated actor was rumored to be the choice for Colin Farrell’s role in the new Dumbo before being cast in another Disney remake?
Will Smith

2. The screenwriter of the Dumbo remake also penned the scripts for this franchise. Name it.
Transformers

3. Which two notable characters from the original Dumbo are not included in the remake?
Timothy Q. Mouse and Jim Crow

4. The original Dumbo was scheduled to be the subject of a Time magazine cover story in December 1941. What event knocked it off the cover?
Pearl Harbor

5. The original Dumbo is one of the shortest animated films ever made by Disney Studios. What is its running time?
64 minutes

6. Danny DeVito plays circus owner Max Medici in the remake. It’s not the first time he’s worked with director Tim Burton. Which other films have the two collaborated on?
Batman Returns and Big Fish

7. What song from the original Dumbo was nominated for an Academy Award?
“Baby Mine”

8. Which organization requested that Disney give Dumbo and his mother a “truly happy ending” in the remake?
PETA

9. Actor Sterling Hayden voiced the character Mr. Stork in the original Dumbo. He later went on to voice which characters in Disney’s animated Alice in Wonderland and The Jungle Book?
The Cheshire Cat and Kaa

10. Name the coauthors of Dumbo, the Flying Elephant, the 1938 children’s book that inspired both Disney films.
Helen Aberson and Harold Pearl

Watch a trailer for Dumbo here.

How Did You Score on Our Dumbo Trivia Quiz?

How Did You Score on Our Dumbo Trivia Quiz?
0
share this