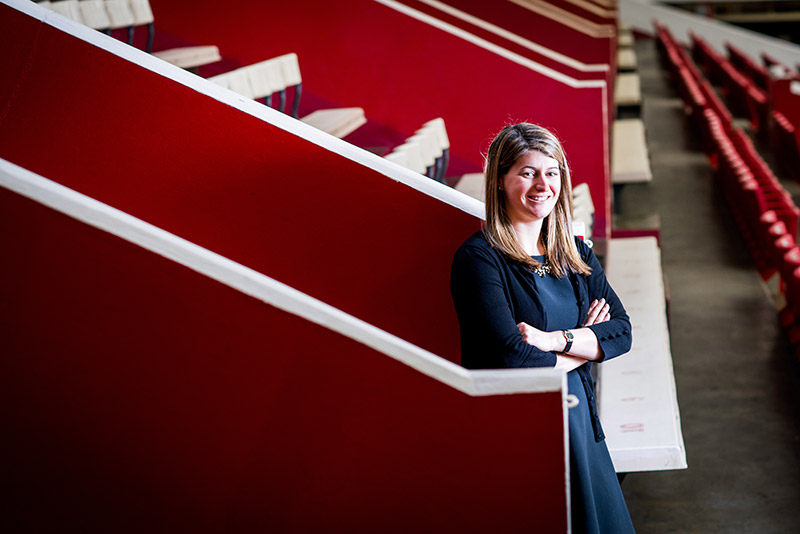 Doctoral student Chelsey Bowman (SED’15,’20) was awarded an NCAA Graduate Student Research Grant to survey college athletes about their attitudes regarding sexual violence on campus. Her research may lead to bystander training programs that teach athletes how to prevent sexual violence. Photo by Jackie Ricciardi

On campus, college athletes can be role models, beacons of school pride, and central players in the social scene. Because of their visibility, athletes can spread positive messages that benefit all students, like when Stanford University student-athletes stood up against sexual assault in a 2014 video ad. Chelsey Bowman (SED’15,’20), a PhD candidate in counseling psychology with a concentration in sport and performance psychology at Boston University’s School of Education (SED), believes that educating student-athletes about sexual assault is an important part of preventing it. In November 2016, she received a grant from the National Collegiate Athletic Association (NCAA) to study the role of student-athletes as bystanders who are willing to prevent and report assault.

“The majority of people are not survivors or perpetrators of sexual violence…can we train those people to see the signs and to intervene?” asks Bowman. Her project, funded by the NCAA’s Graduate Student Research Grant Program, with additional funding from an SED Graduate Research and Scholarship Award, will survey student-athletes about their campus experiences and attitudes regarding sexual violence. The data Bowman collects may then be used to create a bystander intervention training program tailored specifically to athletes.

Bystander training programs, such as the Men’s Program, have been used effectively with college-aged men, combining education and interactive workshops to teach them how to intervene in sexual assault scenarios. These training programs vary in scope but often teach participants how to recognize when a situation could become violent—when people are drinking heavily at a frat party, for instance—and how to step in to try and stop it, by, say, distracting the possible perpetrator or through other techniques. Some programs also teach how to be a good friend to a survivor of sexual violence, and most also provide information on counseling services, medical resources, and any organizations that could help deal with sexual violence.

Bowman’s interest in student-athletes started with herself. She played lacrosse as an undergraduate at Harvard University. From there, she earned an SED master’s degree in counseling psychology with a concentration in sport and performance psychology. Her experience allows her to work with athletes on how best to enhance their performance with regard to mental well-being. Using strategies like goal-setting and relaxation techniques allows her to help athletes return from injuries or reduce anxiety during games.

Bowman is also currently a Glenn Fellow and lab manager of BU’s Social Adjustment & Bullying Prevention Lab. Working with Melissa Holt, an SED assistant professor of counseling psychology and co-supervisor of the lab, Bowman has studied victimization in many contexts. Holt has evaluated bullying-prevention programs for students from late-elementary age through high school, and one program in particular—Second Step—includes lessons for adolescents on what constitutes sexual harassment and dating violence. Studying sexual violence at the college level, she says, can be challenging. “This is a very sensitive topic,” says Holt, and navigating different universities for research can be difficult. However, she says, Bowman is pursuing her project with passion. “She’s very committed to thinking about what programs might be best for the student-athlete population.”

“I hope that schools, and specifically athletic departments, can use this research to learn more about their students and tailor their programming in the future.” Chelsey Bowman

Bowman’s survey will be given to male and female college athletes at two large universities, though Bowman has yet to determine which schools. One question she’ll explore: to what degree are student-athletes different from other college students in their willingness to stand up against sexual violence? Student-athletes differ socially in that they spend large amounts of time with their team—does their connectedness to their team, their team culture, and coach play a role in this issue? Do coaches speak to their students about the signs of sexual violence? Does the team foster a sense of belonging?

Another important factor Bowman hopes to examine is athletes’ attitudes toward “rape myths”—misogynistic ideas that hurt both women and men by fostering acceptance of sexual violence. These include the beliefs that victims are at fault for being raped and that men cannot be raped. Belief in or failure to refute rape myths may make someone more likely to blame the victim and less likely to report a sexual assault. A team’s acceptance, or rejection, of these myths might therefore have a large impact on an athlete’s inclination to be a responsible bystander during sexual violence. “The idea has been that by decreasing acceptance of rape myths, we might be able to increase willingness to intervene,” says Bowman.

The survey will also assess student-athletes’ attitudes and behaviors concerning alcohol. “Alcohol is a huge part of sexual violence, particularly on college campuses,” says Bowman. A report by the National Institute on Alcohol Abuse and Alcoholism indicates that half of sexual assaults involve alcohol use by the perpetrator, the victim, or both. Because drinking is a common social activity on campus, and because it is so closely linked with sexual violence, how student-athletes behave when drinking could be a big factor in how they perceive sexual violence.

Bowman’s study draws on and furthers the NCAA’s own investigations into the intersection of athletics and sexual violence. In 2014, the organization published a report on sexual violence prevention. The report states that student-athletes reported feeling that safety was a community issue, but several factors, including fear of bodily harm or censure by teammates, lowered willingness to intervene in a violent situation. “[A] feeling of responsibility to maintain safety is fairly strong among student-athletes, but they need to know how to do so without putting themselves at increased physical or social risk,” the report concluded.

According to the Rape, Abuse & Incest National Network, about one in four female college undergraduates and one in twenty male undergraduates experiences rape or sexual assault. There has also been an increase in reported assaults over the past decade, according to a 2014 report by the US Department of Education; however, this may indicate that survivors are more comfortable reporting assaults rather than an increase in sexual crime. Regardless, sexual assault continues to be a prevalent campus issue.

The data Bowman collects about college athletes’ beliefs and behaviors will hopefully allow her to understand how best to teach them about preventing sexual violence. “The educational piece is very important,” she says. After all, stepping into a dangerous situation is only possible when one knows what to look for and what to do. The best way of teaching this to athletes may be to involve their coaches, foster team belonging, refute rape myths, or all three. Bowman’s survey will hopefully create a starting point to develop such a program. “I hope that schools, and specifically athletic departments, can use this research to learn more about their students and tailor their programming in the future,” she says.