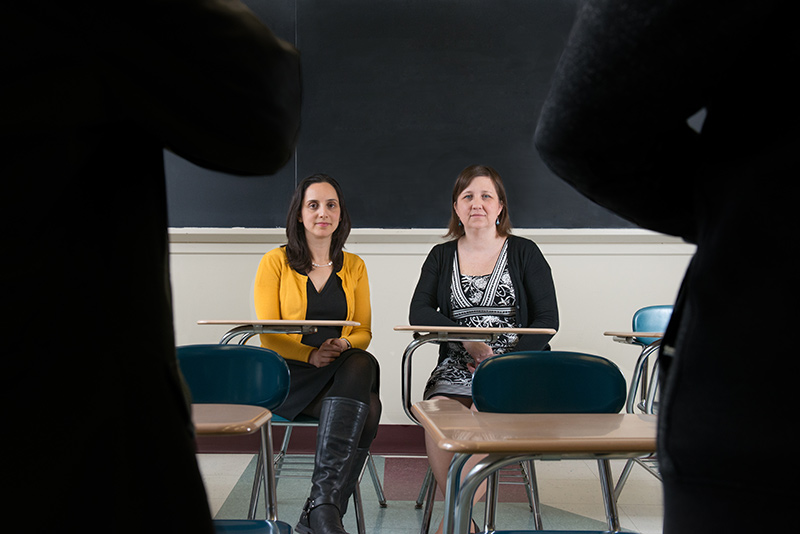 The Centers for Disease Control defines bullying as any unwanted, aggressive behavior that is repeated multiple times and involves an imbalance of power. Researchers know that bullying can cause lasting damage—adults who were bullied as children are at greater risk for anxiety, depression, suicidal thoughts, and further victimization.

But a pilot study by Boston University School of Education (SED) researchers Melissa Holt and Jennifer Green in the Journal of American College Health offers some cautious optimism for bullied students moving into college: although they remain at higher risk for anxiety and depression, many report an active social life, strong academic achievement, and a positive college experience. Though past bullying is a burden, college can give young adults a chance to start over. Holt, an assistant professor in counseling psychology, notes: “the overall picture is hopeful.”

“Nobody in the field had really focused on college as an environment,” adds Holt. “Would entering college be a time of heightened risk? Or would the new environment offer students a chance to redefine themselves? Those were the questions we wanted to answer.”

Holt and Green, an assistant professor in special education, have studied the effects of bullying for years, but it was questions from parents that prodded them into this specific area of research. “We were doing some assessments of high school students who had been bullied, and their parents were asking us what to expect, if their kids would be OK when they got to college,” said Green. “We didn’t know what to tell them.”

Research has shown college entry to be a time of increased independence, and also increased stress. “There are great new opportunities,” said Green, “but also new academic and social challenges, as well as identity adjustments.”

To see how past bullying might figure into the mix, the researchers surveyed 413 students at a large northeastern university via email in February of their first year. The results showed reason for optimism, with many students reporting strong friendships and a sense of belonging. “In contrast to studies of childhood bullying that find that child victims of bullying report lack of engagement in school and weaker peer relationships in general, our results suggest that previously bullied youth might be hopeful about their college experience,” wrote the authors.

This pilot study led the scientists to wonder about specific patterns of adjustment: did some students adapt better to college, and if so, why? To answer this question, they began a larger study in 2013, surveying students at four geographically diverse universities in the fall and spring of their first college year. The researchers are now conducting follow-up surveys and in-person interviews with those same students, now seniors. The data, while still preliminary, have already offered some insight.

“We’ve started to find differences in the trajectories of students over time,” says Green, who says that a key to successful adjustment seems to be informal social support—the ability to make and keep friends during college.

Colleges have recognized this as well, and many are taking a more formal role in helping students form those critical social bonds during their first year. “There’s definitely a first-year experience ‘movement’ afoot,” says Stacy Ulrich, director of Student Programs & Leadership at Boston University’s College of Arts & Sciences. Ulrich directs FY101, an optional, one-credit class open to all first-year students at BU. Classes, which meet once each week, include discussions about substance abuse and sexual assault, but also activities designed to help students form social bonds—like a low ropes course and weekend excursions around Boston. Ulrich says that most classes start with students reporting their “highs” and “lows” of the week, and for many, that’s the most valuable experience. “It helps them realize that everyone is in the same boat,” says Ulrich, “that it’s normal to be homesick, or wonder if you’re smart enough to pass chemistry.”

FY101 classes are co-taught by an upperclassman “peer mentor,” which can give first-year students—including those struggling with mental health issues—a mature confidant. Such safety nets are important, says Holt, because students with a history of bullying may need extra counseling and support. “We hope colleges can increase their support services to attend to this bullying component,” she says. “It has not been on the radar of colleges to date.”

Bullied in the Schoolyard, but Coping in College

Bullied in the Schoolyard, but Coping in College
0
share this