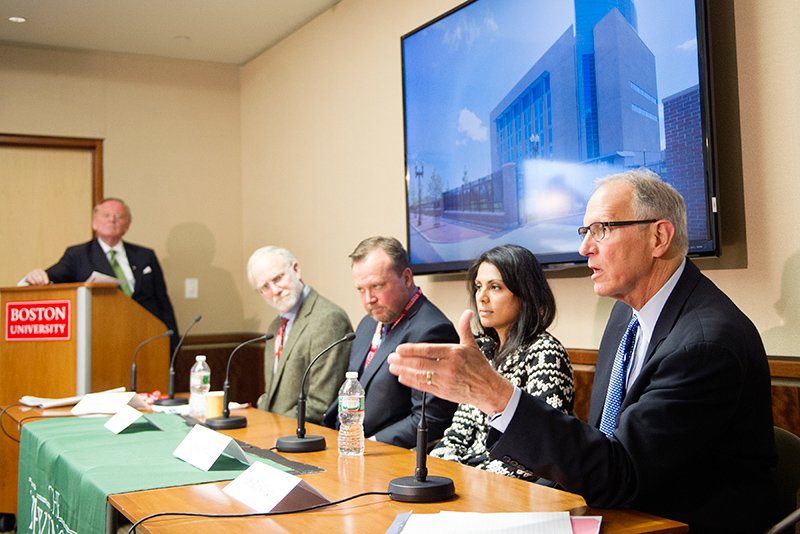 NEIDL director Ronald Corley said during the forum that the Ebola virus is not airborne, and there are almost no examples of a virus that has changed its mode of transmission once it’s in the human population. Above: Jamie Childs (from left), Paul Biddinger, Nahid Bhadelia, and Corley. Photo by Jackie Ricciardi

Speaking at a public forum on Ebola at Boston University’s National Emerging Infectious Diseases Laboratories (NEIDL) on November 7, 2014, NEIDL director Ronald B. Corley stressed the importance of scientists engaging with the public about the realities of the disease. The NEIDL, he said, has mounted an education outreach campaign to do just that.

“It’s not just about Ebola,” Corley told the audience of several dozen people from the business and health care community. “It’s about infectious diseases in general. It’s about research. We have to show we’re not just nerds working in a facility. We want to exchange information—not just with our nerd colleagues, but with the public in general. It’s not something we’ve done well over the last 10 to 20 years and it’s up to us to change, I think.”

The forum was convened by The New England Council, a business organization that has been a strong supporter of research at the NEIDL. Corley was joined by Nahid Bhadelia, a physician who is director of infection control for the NEIDL and who traveled to Sierra Leone in August to help care for Ebola patients; Paul Biddinger, chief of the division of emergency preparedness and medical director for emergency department operations at Massachusetts General Hospital; and Jamie Childs, a Yale School of Public Health senior research scientist and lecturer in epidemiology.

“One disappointing thing is the lack of trust in scientific information,” said Childs, noting the recent efforts by New Jersey, Maine, and other states to quarantine health care workers returning from West Africa who show no symptoms of the disease. “I don’t know where states got their information for the drastic measures they have recommended, but it clearly isn’t from knowledgeable epidemiologists and science experts.”

In a wide-ranging, two-hour discussion, the experts talked about the need to develop rapid diagnostics, vaccines, and additional therapeutics for Ebola and other emerging diseases; how hospitals in the Boston area are preparing for possible cases (none have been reported); and how the disease is transmitted. The Ebola virus is not airborne, Corley said, repeating what he, Bhadelia, and other NEIDL researchers have been saying for months.

“There are almost no examples of a virus that changes its mode of transmission once it’s in the human population,” Corley said. In the case of Ebola, the biological barriers the virus would have to get through in order to become airborne are so great as to make the chances of it happening close to none, he said.

While Ebola is highly infectious, it is extremely hard to catch, and the public health and medical infrastructure in place here insures that any outbreak in the US would be quickly contained, the experts said. There have been two travel-related cases, including one death, in the US and two cases of health care workers in Texas becoming infected. Ebola is spread through direct contact with blood or bodily fluids or through objects, such as needles or syringes, that have been contaminated by the virus.

“The chance of it becoming a generalized epidemic, I will say, is zero here,” said Bhadelia, who is an associate hospital epidemiologist at Boston Medical Center. At Kenema Government Hospital in Sierra Leone, she was one of four physicians caring for over 100 Ebola patients. “There was no ventilation,” she said. “There was fluid everywhere. There were not enough hands to clean up the environment. You could see how it spread.”

The new system of checkpoints at US airports to track people arriving from West Africa makes it “extraordinarily unlikely that anyone who has had a plausible exposure will present unrecognized,” Biddinger said. “The idea that they would just show up at one of our clinics without communicating with us—with health authorities—is extraordinarily low.”

The experts expressed concern about the economies of the countries in West Africa that have been left devastated by the outbreak. “Resources are essential,” Childs said. “Otherwise, we are going to see another devastating impact following this one. We’ve had reports of large numbers of people who weren’t able to get their crops out of the field because of the impact of Ebola on families and workers.”

Here at home, Corley said, it is important to strengthen funding for research into Ebola and other emerging infectious diseases that are a global reality.

“New infectious diseases are recognized once on an average of about every 18 months,” Corley said. “Unfortunately, this is a growth industry. If there is any silver lining in this outbreak, it’s that people really do understand now why it’s better to be able to treat these diseases when and where they occur, rather than allowing them to get where they are now.”

To watch a video of the forum click here.