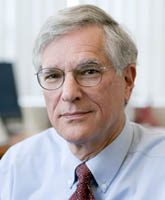 Allen A. Mitchell is Professor of Epidemiology and Professor of Pediatrics at the Boston University Schools of Public Health and Medicine. He obtained his B.A. degree from Washington University in St. Louis in 1966 and his M.D. from Tufts University School of Medicine in Boston in 1970. After pediatric residency training at the Boston Floating Hospital for Infants and Children (Tufts-New England Medical Center), he joined the Boston Collaborative Drug Surveillance Program where, among other activities, he worked with Drs. Slone, Shapiro, and Heinonen in the analysis of Collaborative Perinatal Project data on birth defects and drugs in pregnancy. In 1973-75 he was a fellow in pediatric clinical pharmacology at Children’s Hospital in Boston (jointly with the Center for the Evaluation of Clinical Procedures at the Harvard School of Public Health), during which time he established the Pediatric Drug Surveillance (“PeDS”) Program, an intensive drug surveillance effort focused on the frequency of medication use and adverse effects among hospitalized children. In 1975 he joined Drs. Slone and Shapiro at the newly-created Drug Epidemiology Unit (now Slone Epidemiology Center) at Boston University, where he continued to direct the PeDS Program. Following his interest in both pharmacoepidemiology and birth defects, Dr. Mitchell in 1975 applied the concept of case-control surveillance to the study of teratogenesis, and initiated the Slone Birth Defects Study (BDS) which continues to this time, having collected data on prenatal exposures from tens of thousands of malformed infants (and controls) identified via birth defects registries in Massachusetts and New York State and at participating hospitals in the regions surrounding Philadelphia, Toronto, San Diego, and Nashville. The BDS is now one of two data collection components collaborating with the American Academy of Allergy, Asthma, and Immunology in a national systematic surveillance effort (Vaccines and Medication in Pregnancy Safety Surveillance—“VAMPSS”) designed to evaluate the risks and safety of the wide range of medications taken by pregnant women. Dr. Mitchell also designed and directed a practitioner-based “large simple” randomized trial of 84,000 children to assess the safety of pediatric ibuprofen; that practitioner (SCOR) network continues to conduct clinically-relevant office-based research. He also designed and directed epidemiologic studies to evaluate pregnancy prevention efforts as part of risk management programs associated with isotretinoin (Accutane and others) and thalidomide (Thalomid), and designed the Slone Survey. Dr. Mitchell is the author of numerous publications in the fields of pediatric and birth defects pharmacoepidemiology and serves on many editorial boards and advisory committees.

Centers for Excellence in Birth Defects Research and Prevention

The following are Dr. Mitchell’s 25 most recent publications: