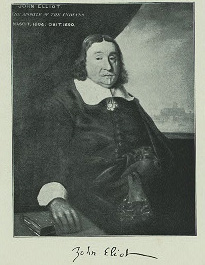 Eliot left England, the land of his birth, in 1631 as a young Puritan pastor. He worked in Boston for a year, then established a church five miles away in Roxbury, where he remained for 58 years, until his death. From the beginning he established an excellent relationship with the Narragansett Indians in the area and gradually also with other peoples speaking related languages. From 1660 he was called the Apostle of the American Indian. He carried on his work with the Indians parallel to his pastoral duties at the Roxbury congregation and to his general duties for the New England church as a whole.
Beginning at Natick, where he preached biweekly until he was past 80, Eliot was instrumental in organizing fourteen Indian villages. No whites were resident, and a form of self-government was instituted according to the pattern given in Exodus 18. Interested neighboring pastors were encouraged to participate in regular instruction. Although most of the evangelization was carried out by personally trained Indian evangelists, Eliot himself traveled on foot and on horseback, taxing his strength to the utmost, sometimes drenched by rain, in order to bring the gospel to the people. He brought cases to court to fight for Indian property rights, pleaded for clemency for convicted Indian prisoners, fought the selling of Indians into slavery, south to secure lands and streams for Indian use, established schools for Indian children and adults, translated the Bible (1663) and twenty other books into Indian languages, and attempted to train Indians to adopt a settled way of life.
Hostilities and mutual suspicion increased between whites and Indians, until in 1675 during King Philip’s War, most of the Indian villages were damaged or destroyed, and many of the Indian Christians joined the war or were relocated. Eliot spent the remainder of his life reestablishing some of the villages.

Adams, Nehemiah. The life of John Eliot; with an account of the early missionary efforts among the Indians of New England. Boston, Massachusetts Sabbath School Society, 1847.

Eliot, John. The Christian Commonwealth: or,The Civil Policy Of The Rising Kingdom of Jesus Christ. An Online Electronic Text Edition. Paul Royster, editor and depositor, U. of Nebraska-Lincoln. (This text must be downloaded to be read.)

_____. “Brief Narrative (1670)” giving a report on the progress of Christianity among the Natives, particularly concerning the condition of each “praying town.”

Wilson, John. The Life of John Eliot, the Apostle of the Indians Including Notices of the Principal Attempts to Propagate Christianity in North America, During the Seventeenth Century. Edinburgh: William Oliphant, 1828.

_____. The Harmony of the Gospels in the Holy History of the Humiliation and Sufferings of Jesus Christ From His Incarnation to His Death and Burial. Boston: Printed by John Foster, 1678.

_____. The Indian Grammar Begun : Or, an Essay to Bring the Indian Language Into Rules, for Help of Such as Desire to Learn the Same, for the Furtherance of the Gospel Among Them. Bedford, MA: Applewood Books, 2001.

Biography of John Eliot with particular emphasis on his linguistic and translation work.