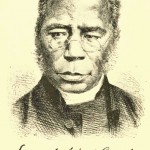 Crowther was born with the name Ajayi in Osogun, in the Egba section of the Yoruba people, in what is now western Nigeria. When about 13, he was taken as a slave by Fulani and Yoruba Muslim raiders and sold several times before being purchased by Portuguese traders for the transatlantic market. His ship was intercepted by the British navy’s anti-slave trade patrol, and the slaves were liberated in Sierra Leone. There he became a Christian, taking at baptism the name of an eminent clergyman in England, Samuel Crowther. Excelling at school, he became a mission teacher and one of the first students of the Fourah Bay Institution, founded by the Church Missionary Society (CMS) in 1827 to train able Sierra Leoneans for Christian service. He assisted John Raban and (probably) Hannah Kilham in their studies of African languages, and in 1841 he joined J.F. Schön as a CMS representative on T.F. Buxton‘s Niger Expedition, contributing signally to it. He studied at the CMS college in London preparatory to ordination in 1843–a landmark for the Anglican ministry. With Henry Townsend and C.A. Gollmer, he then opened a new mission in Yorubaland, centered in Abeokuta, by now the homeland of Crowther’s Egba people. (He discovered some close relatives there and was the means of conversion of his mother and sister.) His role in producing the Yoruba bible, which set new standards for later African translations, was crucial. Crowther’s visit to Britain in 1851 influenced government, church, and public opinion about Africa. The CMS secretary, Henry Venn, saw Crowther as a potential demonstration of the feasibility of self-governing, self-supporting, and self-propagating African churches and in 1857 sent him to open a new mission on the Niger. The entire staff was African, mainly from Sierra Leone, and Venn moved toward an Anglican version of the “three-self” formula by securing Crowther’s appointment in 1864 as “Bishop of the countries of Western Africa beyond the Queen’s dominions.” In the upper and middle Niger territories Crowther pioneered an early form of Christian-Muslim dialogue for Africa. He oversaw J.C. Taylor’s ground-breaking work in Igboland and directed the evangelization of the Niger Delta, with notable results at such centers as Bonny. 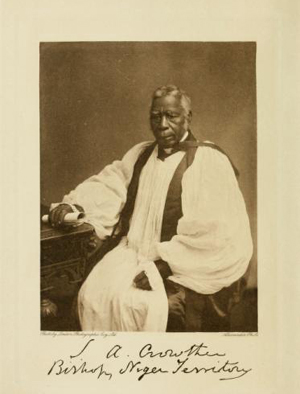 In the 1880s clouds gathered over the Niger Mission. Crowther was old, Venn dead. The morality or efficiency of members of Crowther’s staff was increasingly questioned by British missionaries. Mission policy, racial attitudes, and evangelical spirituality had taken new directions, and new sources of European missionaries were now available. By degrees, Crowther’s mission was dismantled: by financial controls, by young Europeans taking over, by dismissing, suspending, or transferring the African staff. Crowther, desolated, died of a stroke. A European bishop succeeded him.

Part of the Niger Mission retained its autonomy as the Niger Delta Pastorate Church under Crowther’s son, Archdeacon D.C. Crowther, and at least one of the European missionaries, H.H. Dobinson, repented of earlier hasty judgments. Everyone recognized Crowther’s personal stature and godliness; his place in the history of translation and evangelization has often been undervalued.

Crowther, Samuel. A charge delivered on the banks of the river Niger in West Africa. London: Seeley, Jackson & Halliday, 1866.

_____. Journal of an expedition up the Niger and Tshadda rivers, undertaken by Maegregor Laird in connection with the British Government in 1854. London: Church Missionary House, 1855.

Crowther, Samuel, James Frederick Schön, and William Russell Bascom. 1842. Journals of the Rev. James Frederick Schön and Mr. Samuel Crowther: Who, Accompanied the Expedition Up the Niger, in 1841, in Behalf of the Church Missionary Society. London: Hatchard and Son, 1842.

Crowther, Samuel. A charge delivered on the banks of the river Niger in West Africa. London: Seeley, Jackson & Halliday, 1866.

_____. Journal of an expedition up the Niger and Tshadda rivers, undertaken by Maegregor Laird in connection with the British Government in 1854. Cass library of African studies. Missionary Researches and Travels, no. 15. London: Cass, 1970.

Crowther, Samuel, and John Christopher Taylor. The gospel on the banks of the Niger: journals and notices of the native missionaries accompanying the Niger Expedition of 1857-1859. London: Dawsons, 1968.

_____. Henry Martyn Lecture III: Crowther and Trade on the Niger

Hair, P. E. H. The early study of Nigerian languages: essays and bibliographies. London: Cambridge U.P. in association with the West African Languages Survey and the Institute of African Studies, 1967.

“Bishop Before His Time,” from Christianity Today’s “Christian History and Biography.”