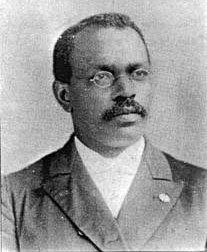 Born into slavery in New Orleans, Bowen became a free man when his father purchased his family’s freedom in 1858. After the Civil War, in which his father served with the Union Army, Bowen attended Union Normal School in New Orleans. In 1878 he graduated with the first graduating class of New Orleans University, established by the Methodist Episcopal Church to educate freed slaves. Bowen taught Latin, Greek, and mathematics at Tennessee College from 1878-1882. He began a Bachelor of Sacred Theology degree at Boston University in 1882 and spoke at his commencement in 1885. During this time, he pastored the Revere Street Methodist Episcopal Church in Boston. After graduation he moved to Newark, New Jersey to pastor St. John’s Methodist Episcopal Church. In 1886 he married Ariel Serena Hedges, with whom he had four children. Also in 1886 he began working towards his Ph.D. in historical theology at Boston University. He completed his degree in 1887, becoming the first African American to earn a Ph.D. at Boston University and one of the first in the entire country. He also received an honorary Th.D. from Gammon Theological Seminary in Atlanta, a seminary founded by the Methodist Episcopal church to train African American clergy. Bowen pastored the Centennial Methodist Episcopal Church in Baltimore and the Asbury Methodist Episcopal Church in Washington D.C. He taught church history and systematic theology at Morgan College and Hebrew at Howard University. He represented his denomination at the Conferences of World Methodism in Washington D.C. (1891) and London (1901). In 1893 he began teaching historical theology at Gammon Theological Seminary, soon becoming Gammon’s first full-time African American professor. As Secretary of the Stewart Missionary Foundation for Africa at Gammon, he edited the Stewart Missionary Magazine. Bowen envisioned a new and liberated “Negro” to build a new nation. As part of that vision he launched and edited The Voice of the Negro in 1904 with Jesse Max Barber. Bowen served as President of Gammon from 1906 to 1910. He witnessed a race riot his first year as President, during which he offered the seminary as shelter for blacks and was, himself, beaten and arrested. He became head of the Church History department, retired in 1926, and continued to teach until a year before his death in 1933.

Bowen, J.W.E, ed. Africa and the American Negro: Addresses and Proceedings of the Congress on Africa: Held under the Auspices of the Stewart Missionary Foundation for Africa of Gammon Theological Seminary in Connection with the Cotton States and International Exposition, December 13-15, 1895.

Penn, I. Garland and J.W.E. Bowen, eds. The United Negro: His Problems and His Progress, Containing the Addresses and Proceedings the Negro Young People’s Christian and Educational Congress, held August 6-11, 1902; introduction by Bishop W.J. Gaines.

Harris, Paul W. “Separation, Inclusion, and the Development of Black Leadership in the Methodist Episcopal Church.” Methodist History 56, no. 1 (October 2017): 14-26.

“J.W. E. Bowen.” In Bowen, J.W.E., ed. Addresses and Proceedings of the Congress on Africa. Held under the Auspices of the Stewart Missionary Foundation for Africa on Gammon Theological Seminary in Connection with the Cotton States and International Expansion. Miami: Mnemosye Publishing Inc., 1969.