Missionary Statistician and Sociologist of Religion 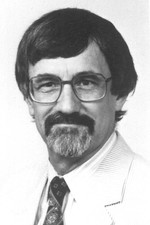 David Brian Barrett was born in Llandudno, Northern Wales, United Kingdom on August 30, 1927. As a child, he attended the Keble House School and Berkhamsted School. He graduated from the University of Cambridge in 1945 with a Bachelor’s, and in 1952 with a Master’s, in Aeronautics. He worked at Britain’s Royal Aircraft Establishment from 1948 to 1952 in aviation design, more specifically, as a Scientific Officer and Aerodynamicist. He quit the air force upon re-assignment to bomb design and entered the ministry of the Church of England. He received a Bachelor of Divinity in 1954. He was ordained a deacon in that year and a priest the following year in the Anglican Province of York.

From 1956–1957, Barrett attended the Church Missionary Society Missionary Training College in Chislehurst, UK. Halfway through the year, he felt a distinct ministerial call to overseas missions, in particular, to reach the “unevangelized millions” as described in a lecture by Bishop Stephen Neill. In May 1957, Barrett was assigned as a missionary to Kisii in Nyanza Province, Kenya. His first introduction to African Christianity was confusion amidst division. He immediately stepped into controversy—the largest Anglican schism to date in Kenya was underway in Nyanza province. The Johera (“people of love”) movement was on the brink of leaving the Anglican Church. Barrett received conflicting information about the nature of his work in Kisii. CMS officials encouraged him live simply and develop personal relationships with schismatic Africans. Diocesan officials in Kenya, however, compelled Barrett to reinforce the Church’s authority and discipline regarding Africans leaving the Church. Barrett sided with the CMS office and a newer style of missions. Further, he sided with the new, growing African separatist movements against the institutionalized, British, Anglican Church.

Barrett took a leave from the CMS after his first missionary tour ended in 1961. He attended Union Theological Seminary and Columbia University and received a Ph.D. in Religion—which he studied sociologically—in 1965. His studies were a tremendous stimulus. He discovered, for the first time, a relationship between his previous life in scientific work and his desired missionary vocation: Columbia University called it “the social scientific empirical study of religion.” In New York, Barrett discovered how the apparently separate worlds of scientific research and Christian mission could be related.

Upon returning to Kenya in 1965, Barrett joined a team of researchers supported by the World Council of Churches and the All Africa Council of Churches for a project titled, “The Evangelization of West Africa Today: A Survey Across 21 Nations and 150 Tribes.” He visited nearly every country in Africa and began collecting massive amounts of data about African religion, evangelization, Christian adherence, and tribal groups. Also in 1965, Barrett became Research Secretary of the newly-founded Unit of Research of the Church of the Province of Kenya, which he headed—as a white British missionary working under an African Anglican Archbishop—until his departure from Kenya in 1985.

In 1968, Barrett published his doctoral dissertation as Schism and Renewal in Africa (Oxford University Press), which launched him onto the world stage as an expert in new religious movement in Africa. Although Barrett worked at the height of the secularization narrative, in 1970 he estimated in the International Review of Mission that Africa would be home to 350 million Christians by the year 2000. In 1968, Kenneth Grub turned the popular World Christian Handbook over to Barrett. He produced the World Christian Encyclopedia (Oxford University Press) after 13 years of research and travel to 212 of the world’s 223 countries. The World Christian Encyclopedia was conceived, developed, and produced in Africa and utterly transformed modern understandings of world Christianity. Unlike prior definitions of “world Christianity” framed in terms of unity, Barrett’s research and travels revealed a world Christian movement that was diverse, but highly fragmented.

Due to conflict with African Anglican Church leaders, Barrett and his family (wife, Pamela, and children, Claire, Luke, and Timothy) left Nairobi in 1985. He was appointed a Research Consultant for the Foreign (now International) Mission Board of the Southern Baptist Convention, where he worked until 1993. He helped the board re-orient their missionary sending toward unreached people groups around the world. Until his death in 2011, Barrett continued as an independent researcher of world Christianity through the World Evangelization Research Center in Richmond, and its later successor, the Center for the Study of Global Christianity (established by Todd Johnson at Gordon-Conwell Theological Seminary in South Hamilton, MA, USA in 2003). Barrett and Johnson produced the second edition of the World Christian Encyclopedia in 2001.

Barrett contributed to the development of world Christianity as an academic discipline with the World Christian Encyclopedia due to its copious statistical material. However, he also provided a new, post-colonial intellectual framework within which to understand the tremendous amount of change that occurred in global Christian adherence since 1900. The Encyclopedia indicated that a new era of world Christianity had come, and its center of gravity had moved from white Europe to black Africa.

by Gina A. Zurlo

———. “Urban Pressures on Religion and Church: A Study of the Luo of Kenya.” S.T.M. thesis, Union Theological Seminary, 1963.