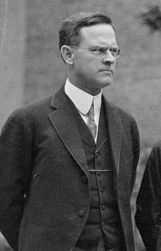 Born in Leavenworth, Kansas, Eddy was educated at Yale, Union Theological Seminary, and Princeton Theological Seminary. Inspired by Dwight L. Moody’s appeal to a Northfield (Massachusetts) student conference and by the Student Volunteer Movement (SVM) watchword “the evangelization of the world in this generation,” he promoted the student missionary cause on American and Canadian college campuses as an SVM secretary in 1893 and 1894. He went to India in 1896 as a secretary for the SVM and YMCA under the auspices of the American Board of Commissioners for Foreign Missions, and from 1911 he served as the YMCA’s chief evangelist in Asia. With the outbreak of World War I, he returned to Europe as a YMCA secretary with British and American armies.

“The war did something to me,” Eddy recalled in 1934; “I could never be quite the same again.” Emerging as a pacifist and socialist, he promoted a radical social gospel during the years before his retirement from the YMCA in 1931. From 1921 to 1957 he led the influential Fellowship for a Christian Social Order, a liberal organization that hosted traveling seminars for American leaders to England, Europe, and the Soviet Union in search of Christian solutions to the reformation of industrial capitalism. He also helped to organize the Christian Socialist Delta Cooperative Farms in 1936, a project in Mississippi that provided land for families of evicted tenant farmers. His latter-day explorations of psychic evidence for life after death are described in his book You Will Survive after Death (1950).

Eddy, Sherwood. The Supreme Decision of the Christian Student: or, The Choice of a Life Work. Chicago: The Student Volunteer Movement for Foreign Missions, 1895.

_____. How China’s Leaders Received the Gospel. New York: The Foreign Department of the International Committee of the Young Men’s Christian Association [1912].

_____. The New Era in Asia. New York: Missionary Education Movement of the United States and Canada, 1913.

_____. A Door of Opportunity, or An American Adventure in Cooperation with Sharecroppers. New York: Association Press, [1937].

Eddy, Sherwood. The Kingdom of God and the American Dream. New York: Harper, 1941.

_____. I Have Seen God Work in China: Personal Impressions from Three Decades with the Chinese. New York: [Association Press], 1944.

_____. A Portrait of Jesus: A Twentieth Century Interpretation of Christ. London: Allen and Unwin, 1945.