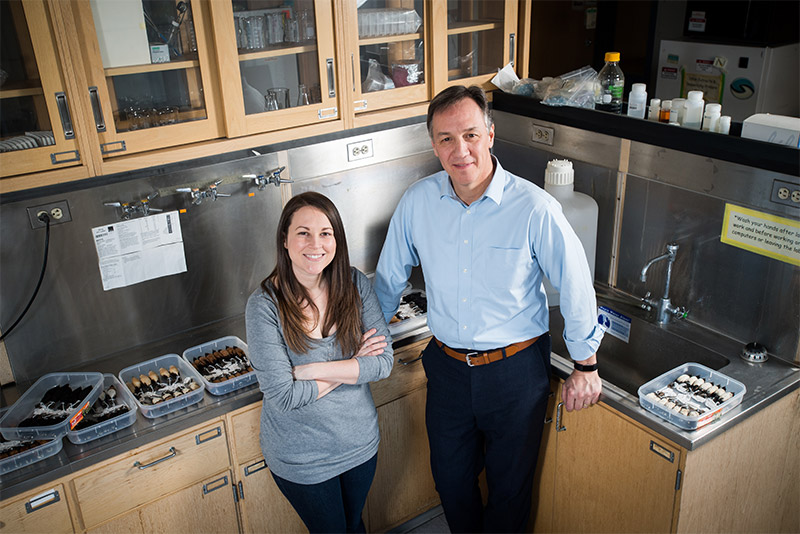 Tucked away in an unassuming gray metal file cabinet in a graduate student office at Boston University is an evolutionary puzzle that would leave even Charles Darwin scratching his head. Inside the cabinet, 18 clear Tupperware containers house 301 estrildid finch specimens from New Guinea, carefully laid out in rows by population and species. Each of the 11 species’ plumage is splashed with its own distinct pattern of black, brown, gray, and white.

Michael Sorenson, a professor of biology, explains that the birds are an evolutionary anomaly: Despite their striking coloration differences, all 11 species are extremely closely related, suggesting that they evolved quickly and recently (evolutionarily speaking), even faster than the famous Darwin’s finches of the Galapagos.

But how and why did these close relatives end up looking so different? And how did they evolve so quickly into different species? Biologists have long wondered exactly how new species form, but generally assume that new genetic mutations account for the changes in form and function that ultimately make each species unique. However, that may not always be the case, and studying unusual groups like the finches of New Guinea helps biologists better understand other ways new species emerge, revealing more about evolution as a whole.

“Speciation is the process by which the incredible diversity of life on earth came into being—including humans,” Sorenson says. “It is not only one of the most fundamental processes in evolutionary biology, but is central to understanding the history of life on earth.”

To understand how this extraordinary group of finches evolved, Katie Stryjewski (GRS’15) collected birds throughout New Guinea and carefully preserved blood, feather, and tissue samples, with Sorenson joining her on the last of four trips. Then Stryjewski used genome sequencing to peer deep inside the birds’ genetic codes.

Sorenson first became interested in the estrildid finches of New Guinea during the late 1990s, when his research on the indigobirds of Africa snowballed into an ambitious effort to build a family tree of all 145 estrildid finch species in the world.

“My career has been a somewhat less-than-coherent series of studies on out-of-the-ordinary examples of behavior and evolution in birds,” he says. “The unifying theme, however, is an interest in understanding not only the evolution of new species, but also the diversity of behavior and morphology observed in different species.”

Sorenson’s project on estrildid finches started in the hallowed halls of natural history museums around the world.

“Because many of these species occur in remote and far-flung corners of the globe, we often had to use old museum specimens, taking a little feather or a bit of skin from the foot as a source of DNA that would allow us to figure out how all these birds were related,” he explains. “This group of species in New Guinea popped out as very, very closely related.”

Sorenson discovered that the entire group of New Guinea finch species was more genetically similar than is typical for the birds within a single African finch species. This points to an “extraordinarily recent and rapid radiation” occurring over tens or hundreds of thousands of years (compared to millions of years for most bird species).

Sorenson was intrigued. “Which genes are involved? And how many genes does it take to build this species versus that species?” he says. “The profound genetic similarity of these species provided the perfect opportunity to answer these questions.”

To investigate further, he needed higher-quality DNA samples, which meant he had to find a PhD student willing to travel to New Guinea to collect finches in the field. He found Stryjewski, who had developed an interest in tropical birds, and top-notch skills in field research, genetic analyses, and bird taxidermy, as an undergraduate student at Louisiana State University.

“Bird taxidermy is my favorite special skill to mention during icebreaker activities,” Stryjewski says with a laugh. “It’s really more art than science, it’s very delicate, and it takes a lot of practice to do it well. Making specimens, says Stryjewski, allows scientists to create a perfect, permanent record of how a bird looked, and the tissues removed in the process are better for DNA analysis.

Stryjewski made four multiweek trips to New Guinea, traveling throughout the country with the help of local guides, looking for clusters of two or three estrildid finch species living in overlapping geographic areas. Once she found a population of finches, which often live by human settlements, she would set up a mist net.

“I would watch them flying and see what their regular patterns were,” she explains. “And the next morning I would go back before sunrise and set up the net, and they fly right into it.” On their final trip, the hunt for two elusive finch species sent Stryjewski and Sorenson nine hours down the Fly River in the remote Trans-Fly region of Papua, New Guinea, where they and their guides deployed mist nets boatside.

Stryjewski took 20 birds from each population (such as the Chestnut-breasted Munia, Lonchura castaneothorax ramsayi) to make taxidermied specimens.

She set up a station wherever she was staying (often in the village guest house) and preserved muscle, heart, and liver tissue from each bird in a buffer solution for later DNA sequencing. She also recorded as much additional information as she could, including body measurements, stomach contents, fat content, and the size of internal organs. And she collected blood and feather samples from up to 30 more birds in each population.

Back at BU, Stryjewski used the tissue samples to sequence the birds’ DNA. First, she sampled thousands of tiny DNA snippets from across each bird’s genome, and confirmed that the finch species are “remarkably similar.” This suggests that rather than requiring many changes across the entire genome—how biologists usually think about speciation—it only takes differences in a small number of genes to form a completely new species.

To pinpoint the genetic differences between species, Stryjewski turned to whole genome sequencing, pooling results from 10 birds in a single population. “Basically you take two different species and you compare their genomes,” Stryjewski explains. “Since they’re really similar all across, anything that’s different should pop out.”

Stryjewski and Sorenson identified about 20 genes that differed among finch species, half a dozen of which are known to control coloration in other organisms, including humans. Different combinations of genes were mixed and matched among species, “as opposed to new mutations cropping up,” Stryjewski says. “Each version of a gene is like a different little thing you could put on a Mr. Potato Head doll, and each bird is collecting a different set of them, and so they all end up looking different.” She and Sorenson published their findings in Nature Ecology & Evolution. The research was supported by the National Geographic Society, the National Science Foundation, and others.

Sorenson adds that “the birds’ genes likely interact with each other in complex ways, making the plumage that results from a particular combination of genes something more than the sum of the parts.” Sorenson thinks that occasional interbreeding between species that live in the same area like the Grey-headed Munia, Lonchura caniceps (below, top) and the Grand Munia, Lonchura grandis (below, bottom) is likely how different versions of genes moved from population to population over time.

Darren Irwin, a zoologist at the University of British Columbia, praises the research for its “elegant analysis of a particularly interesting recent and rapid avian radiation.” He adds that scientists usually think of new species as arising from a single species splitting into two, but “this study provides a great example of how new forms arise in part through mixing genes from other populations.”

Sorenson’s broader goal for the research is to advance general understanding of how evolution works.

“Hopefully it will expand the boundaries of what we know is possible in the process of speciation, and will change scientists’ understanding and perspectives on what exactly species are, and what the minimum requirements are to get the evolution of new species,” he says.

As for the finch specimens, after traveling thousands of miles from New Guinea to BU, they have one more short leg left to their journey: they will cross the Charles River and join the collection at the Harvard Museum of Comparative Zoology.

“I’m pretty excited to donate to Harvard because some of these species they don’t even have, and they’ve only got one or two of the others. They’ll just be preserved there forever,” Stryjewski says. “It’s like the same thing people were doing during the age of exploration, but now we can add this additional layer of the tissue samples and the blood, so their genomes will be preserved as well. It’s a very exciting time to be a zoologist.”

Birds of a Feather

There are 3 comments on Birds of a Feather