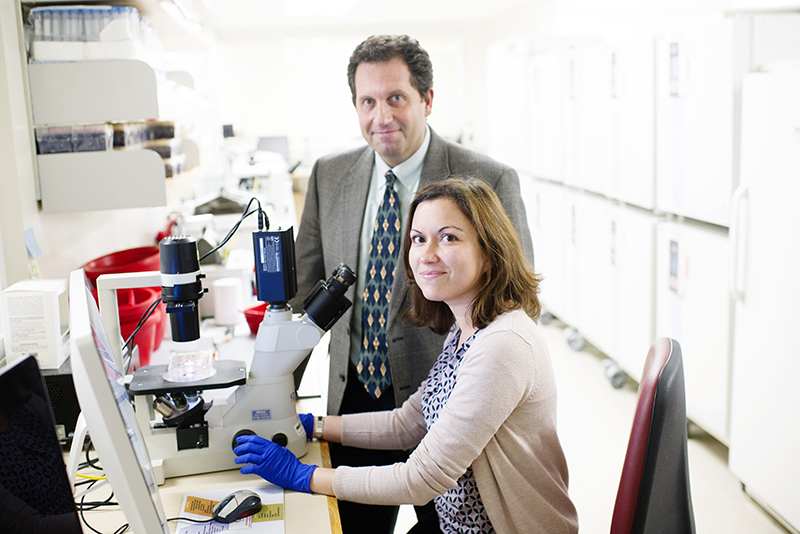 He was a stem cell researcher from Boston University, puzzled by wayward thyroid cells in his lung cultures. The man seated next to him was an endocrinologist from Harvard, searching for a method to grow thyroid cells in the lab. The two scientists, Darrell Kotton and Anthony Hollenberg, had never met before that Rosh Hashanah dinner in 2012. But fate—and a clever dinner host—sat them together, and they hit it off immediately.

“I don’t think we talked to anybody else that whole dinner,” says Kotton, director of the Center for Regenerative Medicine (CReM) and a professor of medicine and pathology at the BU School of Medicine (MED). “It was one of those moments of science that you always remember. In a couple hours, we must have planned a year of experiments.”

The conversation led to fruitful collaboration between the Kotton and Hollenberg labs, as, over the ensuing years, their teams found a way to coax stem cells to grow into working thyroid follicles. When the scientists implanted these follicles into mice with no functioning thyroid, the transplanted cells produced enough thyroid hormone to “rescue” the mice. The work, funded by the National Institutes of Health (NIH) and the chILD foundation/American Thoracic Society, offers scientists a new laboratory tool to study the thyroid and may someday lead to the development of a cell-based regenerative therapy for people who lack functioning thyroids. The research was published online in the October 22, 2015, issue of Cell Stem Cell.

“Everybody wants these stem cells to grow perfectly so we can regenerate organs,” says Kotton, co-senior author on the paper. “But first we need to know how to make them, and how they work in vivo. These are the first steps on the long road to therapy.”

Everyone begins life as a tiny ball of cells, each indistinguishable from the other. But a week or two after conception, all that begins to change. In a process called differentiation, each cell starts to choose its fate, and the ball separates into three distinct layers. One of these layers, the endoderm, gives rise to organs as different as the lungs, the liver, the thyroid, and the lining of the GI tract.

Postdoctoral fellow Maria Serra joined Kotton’s lab in 2011 with a project: to coax embryonic stem cells to grow into lung tissue. It worked, sort of: she grew lung cells, but thyroid cells kept popping up, too. “In the beginning it was like, ‘hey, why is this happening?’” recalls Serra, who is co-lead author on the paper. “But then we realized it was really interesting.” Serra knew that the lung and thyroid cells had certain signal pathways in common. Her job was to tease apart the recipe and discover which chemical ingredients—or as biologists say, growth factors—told some stem cells to grow into lung and others to grow into thyroid.

“Stem cell biology is a lot like cooking; you change one thing, you add more of another thing,” says co-senior author Hollenberg, chief of the Division of Endocrinology, Diabetes and Metabolism at Beth Israel Deaconess Medical Center and professor of medicine at Harvard Medical School. “It’s painstaking and laborious.”

After years of trial and error, Serra discovered a “very complex cocktail” of six growth factors that nudged mouse stem cells toward either lung or thyroid. Then one by one she removed them from the mix and watched what happened. Eventually, she found the perfect recipe: two growth factors (named, unpoetically, BMP4 and FGF2) that turned stem cells into thyroid cells. “It was really, really exciting,” she said.

But the thyroid cells Serra grew were immature, incapable of expressing thyroid hormone. That’s where her colleague Anita Kurmann stepped in, coaxing the cells to grow into mature thyroid follicles. A subtle point: the growth factors that Serra and Kurmann found are the same ones the body uses naturally. “They found the natural recipe that made the stem cells turn the corner,” says Hollenberg. This natural pathway gives the cellular concoction a better chance of taking hold, and flourishing, in a living mammal.

But then came the test. Kurmann implanted the follicles into the kidneys of mice with no functioning thyroid. (The outer layer, or “capsule,” of the kidney, offers scientists a convenient, contained, and well-nourished pocket to place stem cells and monitor their growth.) The mature thyroid cells took root in the mice kidneys, forming tiny pockets of thyroid tissue that released enough hormone to “rescue” the mice, supplying as much as they needed.

Kurmann then tried the first part of the experiment with human stem cells and successfully grew them into immature thyroid cells. Next, the scientists plan to implant the human-derived thyroid cells into mice to see if they, too, function.

“At first, we were just interested in using these cells as a lab tool,” says Hollenberg. “But now we’re really interested in seeing if we can use this as a treatment for humans.”

Hollenberg cautions, however, that human therapy is still years away, because implanted stem cells can potentially grow into tumors. Still, this experiment was promising, he says, because the thyroid tissue lasted in the mice for seven months without problems. But far more safety research is needed before cell-based regenerative therapy is available for humans. For now, the work provides a valuable new tool for lab scientists trying to understand thyroid function and test new drugs in vitro.

The publication of this paper is a bittersweet moment for the team, because Kurmann died in a tragic bicycle accident in August 2015. The scientists dedicated the paper to her memory, writing in the acknowledgments: “She was intelligent, well read, kind, humble, and tirelessly committed to her patients, her thyroid research, her family, and her colleagues, who miss her dearly.”

“The two labs worked so closely together and so well, it was actually a sad day when the paper came out,” says Kotton. “But her work has a lot of promise. It’s her legacy and it meant a lot to her. We’ll continue it in her honor. What Anita started is going to go on.”