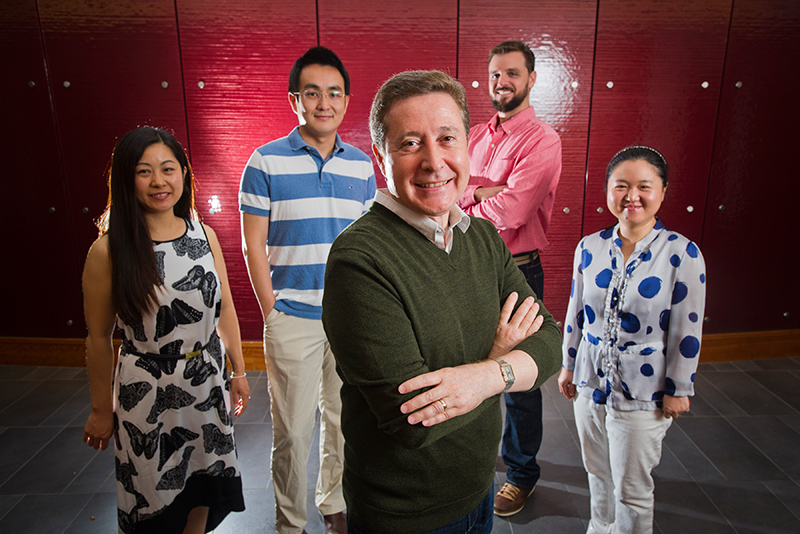 Plamen Ivanov, a BU physics research professor, leads a team that draws on expertise in statistical and computational physics, neuroscience, physiology, applied mathematics, and biomedical engineering to reveal the connections between the body’s systems. Ivanov and his collaborators were recently awarded a $1 million, four-year grant from the W. M. Keck Foundation to advance their work in the emerging field of network physiology. Ivanov (center) is pictured here with members of his team: Aijing Lin (from left), Kang Liu, Gustavo Zampier, and Xiaolin Huang. Photo by Cydney Scott

The patient seemed to be pulling through.

After the accident, he was rushed into surgery and, from there, into the intensive care unit, where he was recovering. But, days later, the dominoes started falling. One by one, his organs failed. The patient didn’t survive. Later, trying to understand what went wrong, doctors ordered an autopsy. But the result was a puzzle: the organs weren’t damaged. So why did they shut down?

This is a typical story of multiple organ dysfunction syndrome, better known as multiple organ failure. Although it’s the leading cause of death in patients who make it through the first few hours after a trauma, its origins remain a mystery.

Plamen Ch. Ivanov (GRS’99), a research professor of physics in Boston University’s College of Arts & Sciences, and his colleagues at BU’s Laboratory for Network Physiology think the answer may lie not in the individual organs but in the biological communications network that keeps them working in sync. Now, with the support of a $1 million, four-year grant from the W. M. Keck Foundation, they are laying the groundwork for an emerging field—network physiology—to study these connections and generate a new human “atlas” that will reveal how organ systems interact in both sick and healthy patients.

Ivanov introduced the field to the scientific community with a 2012 paper in Nature Communications, and he delivered the opening lecture at a Harvard symposium on network medicine later that year. A special issue of the New Journal of Physics followed in 2013. “We were really opening a blank page,” Ivanov says. With most federal funding reserved for advancing established fields, not launching new ones, the project could have stalled. But the Keck Foundation, established in 1954 by the founder of Superior Oil, the late W. M. Keck, provides funding specifically for pioneering work in science, engineering, and medical research that has the potential to lead to new paradigms, technologies, and discoveries that will save lives. They saw potential in the high-risk, high-reward work. “It allows us to really do something new as a field: develop the first analytic methods and theoretical framework to address the unique problems we encounter in network physiology,” says Ivanov.

Biologists and doctors have typically studied organs in isolation. If you’re having heart trouble, you go to the cardiologist; if your eyes are bothering you, you see an eye doctor. This “reductionist” approach “has been very useful scientifically in every field for the last two to three hundred years, but it has its limitations,” especially in biomedicine, where it is impossible to isolate the systems that make up the whole, says Joseph Loscalzo, who studies the related field of network medicine, which aims to understand the relation between diseases and genetic mutations using graphs and networks. He is Hersey Professor of the Theory and Practice of Medicine at Harvard Medical School, chair of Harvard’s Department of Medicine, and Physician-in-Chief at Brigham and Women’s Hospital. Loscalzo and Ivanov discovered that they were both interested in developing novel network approaches to medicine and the human body when Ivanov joined Harvard Medical School’s Sleep Medicine division.

Treating organs in isolation also can’t explain medical crises that seem to happen in the space between individual organs, like multiple organ dysfunction, or altered states like coma.

Yet examining the linkages between the organs is a major challenge. For one thing, there’s the problem of time: each organ seems to hear the ticking of a different clock. The eyes and brain exchange lightning-quick signals in a matter of milliseconds; the kidneys plod along through a 24-hour cycle; the heart beats every second or so. Communication between the organs takes multiple forms, too. Electrical signals combine with chemical messengers like hormones to form a sort of internal full-body internet. And, of course, we still don’t have a complete understanding of how individual organs work.

But to figure out how the network functions, Ivanov and his colleagues have to start with even more basic questions, says Ronny Bartsch, formerly a BU research assistant professor of physics and now part of the faculty at Bar-Ilan University in Israel, who has worked with Ivanov since 2008. “What do we measure?” he asks. “Do we have the technology to measure it? And can we make sense of the measurements?” It isn’t as simple as just collecting heart rate or EKG readings, points out Ivanov: the real challenge is getting useful information from these signals.

To address this challenge, Ivanov has assembled an interdisciplinary team of scientists at BU, including researchers with backgrounds in statistical and computational physics, neuroscience, physiology, applied mathematics, and biomedical engineering. The team also works with collaborators throughout Boston, including intensive care clinicians at Massachusetts General Hospital, sleep researchers at Brigham and Women’s Hospital, and biomedical engineers at MD PnP, a maker of innovative biomedical devices. Ivanov is also an associate physiologist at Brigham and Women’s Hospital and a lecturer on medicine in Harvard Medical School’s Division of Sleep Medicine.

The ultimate result of their work, they hope, will be a new way of looking at the human body—what Ivanov calls a dynamic “atlas” animated with the living, changing connections between organs. Ivanov describes the atlas as a collection of “blueprint reference maps” that will ultimately show how the body’s systems interact under all sorts of human conditions: healthy and sick, young and old, awake and asleep, stressed and relaxed. This atlas will be to the traditional, encyclopedia-style atlas of human anatomy what a live traffic report is to a paper road map, revealing not just the “infrastructure” of the body but the traffic that animates it.

“We want to understand how systems talk to each other,” but to do that, the systems have to be under certain controlled conditions, says Kang Liu, a research scientist in the physics department who earned his PhD from BU in 2013. So Ivanov and his colleagues asked themselves: When is the body most isolated from all the noises, sights, smells, and activity of the world? Answer: During sleep. Sleep also presented a compelling scientific mystery: How do the body and brain manage to seamlessly transition from one sleep stage to another, over and over again, each night?

Ivanov had previously studied how variations in heart rate change during each stage of sleep. The next step would be to see not just how individual systems operate during sleep, but to map how the connections between brain and body change as a person passes into light sleep, deep sleep, and REM sleep. For full eight-hour sleep periods, Ivanov and his colleagues tracked subjects’ brain activity, eye movement, breathing, heart rate, and leg and chin movement. Then they looked for correlations between activity in each part of the body.

During deep sleep, they found, most of the body’s systems seemed to be disconnected. But new linkups suddenly switched on when each subject shifted into REM sleep. Even more connections flipped on for light sleep until, when subjects woke up, all the connections were suddenly illuminated. His team was astonished to find how quickly the communication network could be rearranged, Ivanov recalls. Though researchers had expected that the body’s “network topology”—that is, the shape of a map that represents its connectivity—would change over hours or days, no one had anticipated that it might change in a matter of seconds. The results were published in Nature Communications in 2012.

Sleep, though, is just the first test case in a much broader research program. In 2015, with the support of the Keck grant, Ivanov’s team will bring their work into a real-world laboratory where the stakes are, literally, life-and-death: the Medical Intensive Care Unit (MICU) at Massachusetts General Hospital (MGH), which takes a multidisciplinary approach to caring for severely ill patients. The goal: a new model of ICU monitoring in which the connections between a patient’s body systems are being constantly mapped in real time, so that dangerous breakdowns, like the ones that might cause multiple organ dysfunction, can be anticipated and even prevented.

Today’s monitoring devices aren’t capable of taking in and integrating all this data from multiple systems, says Ivanov. That’s where the device makers at MD PnP come in. Working with MGH’s MICU physicians and members of the Network Physiology Lab, they will be designing new all-in-one monitors that record heart rate, respiration, and more.

Making sense of all that data, and discovering which dropped connections should raise alarms, will fall to data scientists like Aijing Lin, who is visiting the Network Physiology Lab from Beijing Jiaotong University in China, and Xiaolin Huang, a biomedical signals expert visiting from Nanjing University. With the right biomedical data in hand, they hope, it may even be possible to flip the “reactive” model of critical care on its head and prevent the events, like heart failure, that send patients to the ICU in the first place.

“It’s very difficult to predict sudden cardiovascular events,” says Huang. Doctors track patients’ blood pressure and heart rate, but by the time blood pressure starts dropping, says Huang, it is too late to stop a heart attack. “Maybe we can see something in the coupling between systems that we cannot see in the individual systems,” says Ivanov. That could help doctors predict imminent cardiac events before heart rate and blood pressure change.

Such developments are still years or even decades away, emphasizes Ivanov. “This Keck-funded pioneering research program is in a similar stage to what the Human Genome project was 25 years ago, when they started to develop first genomic maps,” he says. Just as it has been a long road from the first human genome to meaningful medical applications, it will take time for network physiology to mature into new diagnostics and treatments. When it does, though, Ivanov hopes that it will reveal a fresh picture not just of illness, but of health, too. “Most biologists have a healthy skepticism about whether this approach will yield new insight. But the evidence that it will is growing,” says Loscalzo.

“The human body is like an orchestra,” says Ivanov. “Each instrument has its own sound and frequency. Each works on a different timescale, with different dynamics. If the musicians are all playing different tunes, it doesn’t matter how skillfully they are performing—the result will be a cacophony. But when they all come together as an orchestra, the result is something beautiful.”