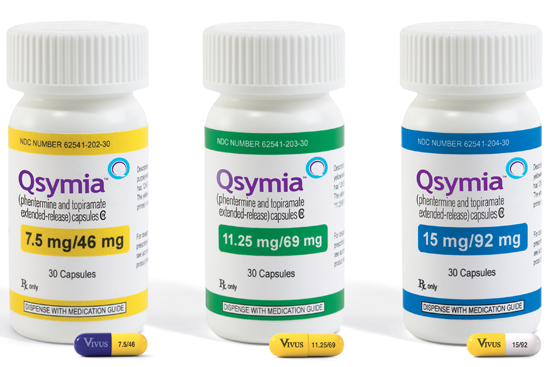 The drug formerly known as Qnexa (now it’s Qsymia) has been approved by the Food and Drug Administration for weight loss. Photo courtesy of Vivus

Anti-obesity wonder drug or a potentially dangerous substance begging for a recall? That’s the debate sparked by Tuesday’s federal approval of Qsymia as a prescription drug for weight loss.

After the most obvious question about Qsymia (it’s pronounced kyoo-sim-EE-uh), the second most obvious question is whether the drug works. Yes, with warnings about its use by certain patients, says Dr. Caroline Apovian, who heads Boston Medical Center’s Nutrition and Weight Management Center. In fact, the School of Medicine associate professor has already prescribed a medication that’s a component of Qsymia for some of her patients. (Qsymia, formerly called Qnexa, includes two previously approved medications—one a stimulant that suppresses appetite, the other an anticonvulsant that controls seizures.)

The U.S. Food and Drug Administration (FDA) initially rejected the drug in 2010, but relented after reviewing new data presented by the manufacturer this year. In announcing its decision, the FDA said it had approved the drug for patients whose body mass index (BMI) is 30 or higher (i.e., they’re medically obese) or who have a BMI of at least 27 (medically overweight) plus at least one weight-related complication (e.g., adult diabetes, high blood pressure, high cholesterol, etc.)

The FDA warned that certain people should not use Qsymia, including pregnant women. The drug can cause birth defects if taken early in a pregnancy, even before a woman realizes she’s pregnant. (Women of childbearing age taking the drug are urged to use effective contraception.) The FDA warned that glaucoma and overactive thyroid patients, people taking antidepressants known as MAOIs, and those allergic either to Qsymia’s stimulant (phentermine) or anti-seizure medication (topiramate) should avoid the drug as well.

Critics have noted that the stimulant in Qsymia was also a component in Fen-Phen, a diet drug craze in the 1990s that ultimately was discontinued after evidence linking it to heart valve problems. (The stimulant was not the cause of those problems, according to WebMD.com.)

BU Today asked Apovian to help address some of the questions surrounding Qsymia.

BU Today: When did you begin prescribing it off label, and why?

Apovian: I began off label as soon as I heard about Phase III [randomized, controlled multi-location] trial results a few years ago. Fifty percent of patients we see get prescribed anti-obesity medications in addition to diet and exercise, and we see 450 patients per month. The trial results of Qsymia produce the best weight loss we have seen since the era of Fen-Phen.

What’s the significance of the FDA’s approval? In the arsenal of weight-loss weapons, how important is Qsymia?

It’s the second approval of an anti-obesity agent in 10 years and the best weight-loss agent. We need more drugs for obesity, as many drugs as there are for type 2 diabetes and hypertension.

What warnings and contraindications has the FDA placed on Qsymia?

Topiramate, one of Qsymia’s components, is teratogenic [can interfere with fetal development], and another component, phentermine, can increase heart rate and blood pressure. So women of childbearing age and people at risk of cardiovascular disease should watch out.

What about critics who say weight-loss drugs generally don’t work well and can be dangerous, as in the case of Fen-Phen?

We have evidence that a ten percent weight loss improves mortality and co-morbidities for obese patients, and doctors will evaluate the risk-versus-benefit of Qsymia, just like they do with any drug for other conditions. Weight-loss drugs work if used properly and with diet and exercise and behavioral modification of lifestyle.

I wonder if drugs like this can become a crutch, an excuse for patients to ignore diet and exercise as part of their weight-loss plan?

That’s the same as saying that drugs for type 2 diabetes are a crutch—just stop eating sugar and carbohydrates. Obesity is a disease, not a matter of willpower.

How prevalent do you expect physicians’ prescription of Qsymia to become?

I think it will be used as an adjunct to diet and exercise and behavior modification as a first-line medication, if the patient has no contraindications to using the drug, such as childbearing potential and inability to take contraceptives or uncontrolled blood pressure or heart disease.

Obesity is a disease, and we are seeing that the paradigm for obesity treatment is shifting. We are seeing drugs becoming available because doctors, laypeople, the FDA, and the research community are realizing that obesity causes much disease and mortality. This is only the beginning. We have safer surgeries available, diet and exercise, behavior, and some medications coming out—a confluence of treatments that can be used concomitantly to treat both type 2 diabetes and obesity. We still have a treatment gap for [people with] BMIs of 30 to 35, but it is closing. We also have a certification exam for obesity medicine starting in November of this year; we have created a new sub-specialty called obesity medicine. This will enable primary care physicians and other specialties to have skills so that they can manage obesity and the medications being approved for it.

Will Qsymia Make You Thin?

There are 33 comments on Will Qsymia Make You Thin?