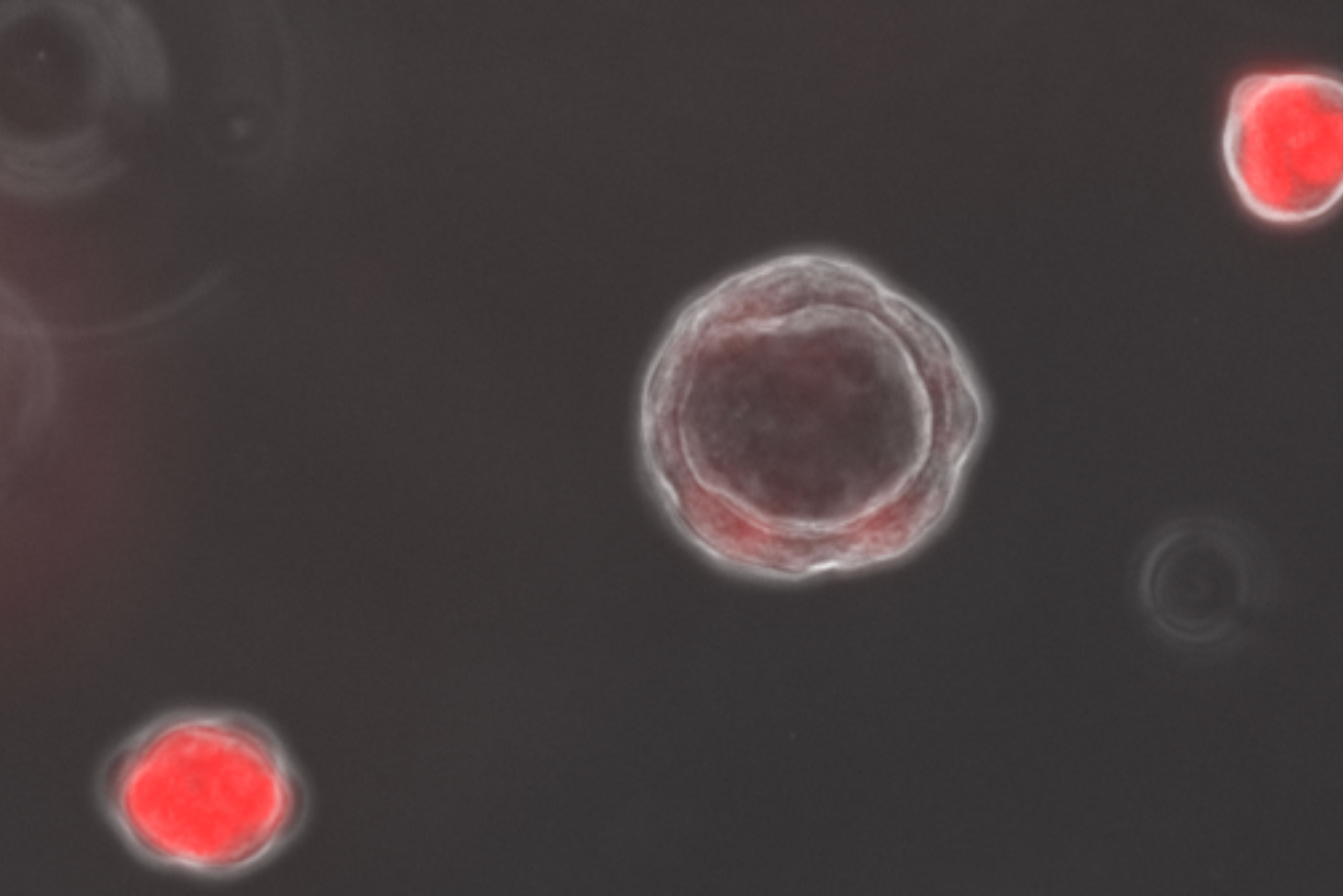 A team of infectious disease and regenerative medicine researchers at Boston University, studying human stem cell–derived lung tissue infected with SARS-CoV-2, are discovering new insights into how the novel coronavirus kicks off a cascade of tissue inflammation in the lungs.

That reaction can be especially lethal for older people, who make up 8 out of every 10 deaths from COVID-19, the disease caused by the coronavirus. As people get older, their risk of having an underlying health condition increases, and at the same time, their immune system is aging. Both of those factors are thought to contribute to chronic inflammation—making older people far more susceptible to the added inflammation that a COVID-19 infection sets off in the body.

The researchers’ experimental data appears to confirm a theory developing among clinicians and researchers that SARS-CoV-2 initially suppresses lung cells’ ability to call in the help of the immune system to fight off the viral invaders. The delay in recruiting defensive reinforcements then backfires, the signal going off several days after infection has set in. That delay attracts an army of immune cells into lung tissue laden with infected and already dead and dying cells, dousing those inflammatory conditions with even more fuel.

Like most other scientists racing to find promising new strategies to halt the spread of COVID-19, the BU team has publicly released their data in a “preprint” paper (a draft that has not been formally reviewed and published in a peer-reviewed journal) to share their research with the scientific and medical community as soon as possible while their findings are being peer-reviewed for publication in a scientific journal.

“The data is teaching us that [the cells lining the lungs] act something like a white blood cell,” a patrolling watchdog cell that’s part of the immune system, after infection with SARS-CoV-2, says study coleader Darrell Kotton, a lung biologist and director of the Center for Regenerative Medicine (CReM) on BU’s Medical Campus. The infected lung cells “pour out inflammatory proteins.” In the body of an infected person, those proteins drive up levels of inflammation in the lungs.

The data is based on experiments the research team performed at BU’s National Emerging Infectious Diseases Laboratories (NEIDL). Kotton and other members of CReM have developed sophisticated models of human lung tissue—three-dimensional structures of lung cells, called “lung organoids,” grown from human stem cells—which they’ve used at BU and with collaborators elsewhere to study a range of chronic and acute lung diseases.

Adapting their expertise to engineer alveolar cells, which line the inside of lungs and are difficult to extract from patients for research purposes, the CReM lung model is being infected with SARS-CoV-2 by virologists at the NEIDL. The stem cell–derived lung model provides a better model of cells found in real human lungs than, as is commonly done, using cultures of animal-derived cells to investigate disease.

For more than a decade, Kotton has worked with BU regenerative medicine and stem cell engineers Andrew Wilson and Finn Hawkins—who along with Kotton are faculty members at BU School of Medicine and pulmonologists at its teaching hospital, Boston Medical Center (BMC)—to develop these state-of-the-art stem cell models. The three physician-scientists work together at BMC, caring for patients with lung disease—including, over the last six months, people critically ill from coronavirus—while leading the CReM teams that engineer lung cells and organoids for research.

Mohsan Saeed, a BU NEIDL virologist working on this research with Kotton and other collaborators, says organoids are extremely valuable to infectious disease researchers. “During the Zika outbreak, scientists were using brain organoids, and similarly, liver organoids have been used to study hepatitis C,” Saeed says. “One of the things I noticed when the Zika outbreak came along is that when you immersed brain organoids in the virus, the infected cells—and neighboring cells like you would find in a true brain—reacted quite differently than traditional cultured cells.”

To study the novel coronavirus in lung tissue mimicking human lungs, Jessie Huang, a postdoctoral associate at the CReM, says the team adapted an experimental model previously developed to study the effects of smoking cigarettes.

“We plate all of the [lung cells] on a mesh membrane, and then we expose them to the air on the top,” Huang says. Below the membrane, a liquid substance filled with cellular growth factors feeds the cells, a substitute for the blood vessel network of the human body.

At the NEIDL, BU virologist Adam Hume, a senior research scientist in Elke Mühlberger’s lab, adds droplets of live coronavirus on top of the lung cells, infecting them from the air side of the interface, similar to the way the virus infects cells lining the inside of the lungs when air containing the virus is breathed into the body. They’ve been running these experiments inside one of the NEIDL’s Biosafety Level 4 (BSL-4) laboratories, the highest possible level of biosafety containment used for infectious agents that pose especially high risk to humans.

Mühlberger’s BSL-4 lab at the NEIDL typically handles some of the world’s most lethal viruses, like the ones that cause Ebola or Marburg fevers. But since the start of the coronavirus outbreak her team has pivoted to focusing on SARS-CoV-2, collaborating with colleagues from BU and universities across New England who don’t have their own infectious disease research facilities. (The BSL-4 lab they use to perform live SARS-CoV-2 experiments is one step of containment above the required BSL-3 that the Centers for Disease Control and Prevention says is required for working with live copies of the virus.)

Since the pandemic took root in the United States, Hume has been clocking up to 30 hours a week inside the BSL-4, wearing the requisite full biocontainment suit with its own oxygen supply—an earthly version of a space suit, essentially.

He’s infected hundreds of cell cultures with live coronavirus using purified, highly concentrated doses of SARS-CoV-2 that he’s enhanced for experimental research purposes. The purified coronavirus removes the chance that any other cell components are present, so that other factors don’t influence experimental results. The doses also contain a high concentration of the coronavirus so that each attempt to study the disease in lab cultures has an extremely probable chance of achieving infection. This level of efficiency, Hume says, is critical for coronavirus research to proceed quickly.

Mühlberger says their experimental observations in the lung model confirms that SARS-CoV-2 blocks cells from activating the immune system early on after infection has set in. The signal the cells would typically send out, a tiny protein called interferon that they exude under threat of disease, are instead delayed for several days, giving SARS-CoV-2 plenty of time to spread and kill cells, triggering a buildup of dead cell debris and inflammation.

Interferon is already being used experimentally in some patients based on initial research conducted elsewhere that revealed that SARS-CoV-2 dampened interferon’s signal in commercially available cell lines. But many of those cells have muted immune system responses anyway, Mühlberger says, because of the way they are produced and processed for mass experimental use. The CReM’s lung models, on the other hand, represent true “in the wild” cell types—they behave much more like the actual cells inside the lungs of living humans.

Now, Mühlberger says, the team is planning to investigate the impact of the SARS-CoV-2 virus on a mix of lung cells and white blood cells, the patrol cells of the immune system. Looking at both types of cells, infecting them together in coculture, is important because white blood cells, after picking up distress signals sent out by infected lung cells, travel into lung tissue to kill SARS-CoV-2. Their arrival and subsequent attack on coronavirus-infected cells can add even more fuel to a raging five-alarm fire of inflammation.

Because, early on after infection, SARS-CoV-2 appears to slow down the body’s ability to call in the help of the immune system, by the time white blood cells appear, they may tip the lungs into a dangerous level of inflammation that can lead to organ failure.

“Why do some people generate this very profound response, especially elderly people or people with underlying health conditions?” Hume says. “It’s possible they are experiencing higher levels of inflammation, or that their immune systems aren’t able to control the virus before inflammation takes hold.”

What Sets Off Deadly Levels of Lung Inflammation in Some COVID-19 Patients?
0
share this