At American Express, Doug Buckminster is adapting to technology’s impact on how we spend our money

It’s a weekday morning, and you’ve stopped at a coffee shop for your daily latte. When it’s time to pay, will you take the hot cup in one hand, unzip your bag with the other, and pull out a wallet stuffed with cash and credit cards? Or will you use an app on your phone (which, let’s be honest, is already out) and transfer the money straight from your bank account to the register? 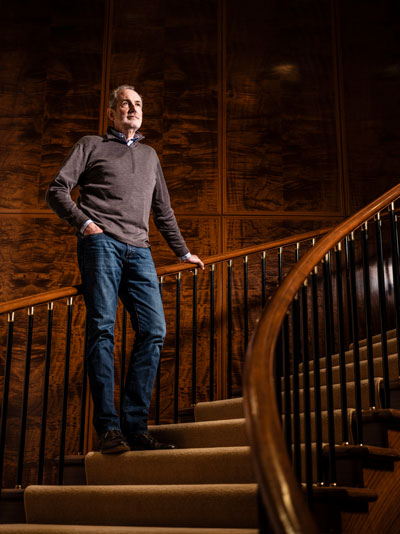 Buckminster joined American Express in 1986 because he wanted to shape an organization—not just help maintain one.

That’s the kind of question that Doug Buckminster (BSBA’82) of American Express thinks about every day. That, and making sure the 150 customer emails he receives each week are answered. A one-time summer intern who’s now group president of global consumer services, Buckminster has spent 33 years at the company, and still finds the job fresh and exciting.

“I’m not sure there’s ever been a time that’s more dynamic than this one,” says Buckminster, who has seen the company through the fallout from airline bankruptcies, a merchant revolt, 9/11, and what he describes as a “divorce” from Costco in 2015. One of the latest challenges is the prodigious growth of new direct payment mobile apps like Venmo and Zelle, which market themselves as a credit card alternative (and in Venmo’s case, tack a surcharge onto any transactions funded via credit card).

Buckminster’s take? Bring it on. Early in his career, he decided he wanted to play a role in shaping organizations, not maintaining them. And in his view, every setback offers someone—from an intern to a top executive—an opportunity to innovate.

“These existential moments sharpen the focus,” he says. “And it’s good to have that muscle, that ability to pick ourselves up and paint a picture of the future that’s at least as compelling as the past.”

American Express might not be the first company that leaps to mind as an example of a dynamic organization. The firm, founded as a delivery service to the new American frontier by shipping magnates Henry Wells, William Fargo, and John Butterfield, celebrated its 168th birthday in 2018. Buckminster himself is a self-described “very rational guy” whose first job out of Questrom was as a financial analyst with the defense contractor Raytheon. He liked the job, but quickly realized that the finance expert at a defense company was never going to play a significant role in shaping the product or the culture.

“I was always going to be ancillary to the product and their core business, because I wasn’t an expert in satellite and communication technology,” he says. “I decided I needed a change.”

He went from Raytheon to graduate school, where a summer internship at American Express led to a full-time offer in the fall of 1986. The company was still dealing with the fallout from 1978’s Airline Deregulation Act, which had sparked years of airline bankruptcies, each one forcing American Express—with travel services as a core part of its brand—to offer costly customer ticket refunds. As Buckminster developed an airline risk management strategy, he began considering how the company’s lifestyle brand and reputation should adapt to a new era. It was a moment, Buckminster says, when he understood the forward-thinking approach that goes into building a long-term career.

“When I started, our CEO, Lou Gerstner, used to give a speech that said, ‘Come in, put your head down, do your job way better than anyone else has done that job, and things will work out for you,’” Buckminster says. “There’s an element of that that’s still true, but I think that’s table stakes. People who are really successful take control of their own career. The modern corporation doesn’t orchestrate their movement.”

In Buckminster’s case, that realization led him from airline risk management to helping develop the company’s first proprietary risk management technology, and then a position as chief credit officer for international business. A general management role took him to Latin America, Canada, the United Kingdom, and then back to New York. Today, he’s still wrestling with risk—particularly when it comes to fraud—but also with the opportunities and challenges thrown up by digital and mobile products.

During his tenure with American Express, the company’s reputation has had high moments (the ubiquitous “Don’t Leave Home Without It” ad campaign, played out to great effect in popular culture for several decades from its inception in the mid-1970s) and low (1991’s “Boston Fee Party,” when a group of New England restaurateurs banded together and refused to accept American Express cards unless the company restructured its exclusive merchant discount pricing). But the ups and downs of the prior century are nothing compared to the pulse-paced fluctuations of this one.

The 2008 financial crisis left consumers wary of financial services companies, a feeling fueled by increasingly frequent data thefts at major retailers. Meanwhile, with mobile technology, early-adopting consumers can envision a world where they don’t need credit cards at all.

Buckminster, a member of Questrom’s Dean’s Advisory Board, says the old, established brands and the people that run them need to take a hard look at the entire organization, from the consumer product to the corporate culture, and help them adapt to survive.

“In the last 20 years, we’ve had a number of events, firm-specific or secular, that have caused us to reinvent ourselves,” he says. “The imperative is to adjust and adapt, to remain relevant.”

American Express intends to stay the same brand it has been for decades: a financial-services company with a lifestyle focus and customers who “can count on that company to always have their back,” according to Buckminster. But is that what the latest generation of consumers wants?

“That’s what I get pushed on by investors, analysts, and colleagues more than anything,” Buckminster says. “It’s a source of great energy and paranoia for us on an ongoing basis.” 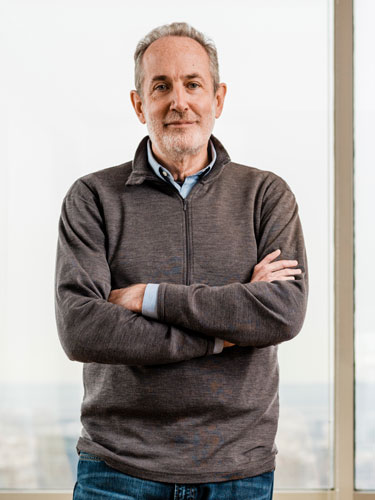 Buckminster says there was too much deference for experience when he joined American Express; now, good ideas can come from every level of the organization.

Some of the solutions are clear: develop technology that lets clients enroll and manage accounts from mobile phones, and offer partnership incentives beyond the traditional airline miles model, like discounted rides with Uber. To stay competitive, American Express has recently acquired some smaller tech companies that specialize in offering travel and dining assistance using AI-powered, chat-based interactions from a mobile phone. It’s a new development that both aligns with the classic American Express brand, Buckminster says, and attracts mobile-centric consumers who might otherwise choose a direct payment app or another card.

To help American Express maintain a strong presence in the market, Buckminster has relied on a different lesson he took away from his first job at Raytheon. “Company culture,” he says, “takes on the characteristic of its largest customers.”

For the latter part of the last century, the American Express culture reflected old-school trappings of luxury—what Buckminster calls “the yacht, private jet connotation.” Now, he says, with a new generation rapidly becoming a powerful force in the boardroom and in the marketplace, it’s an interest in the company’s ethics and beliefs, and a desire to solve social problems.

“There’s an expectation, now, that the company is going to have a point of view, and it’s not going to be about next quarter’s earnings per share,” he says. “The current generation of colleagues asks, ‘What is our purpose?’”

Buckminster and his team have started to answer that question. In a partnership with Parley for the Oceans, a nonprofit specializing in reducing plastic pollution throughout the world’s oceans, American Express has pledged to reduce single-use plastics in its corporate offices, and has already phased out their use in the company’s Centurion airport lounges around the world. Consumers have their own opportunity to get involved in the collaboration: a new Ocean Plastic card, manufactured with upcycled marine debris, is scheduled for rollout late in 2019.

The company has also moved away from the office charity drives Buckminster remembers from his early days, and now offers employees many opportunities to volunteer, including with the Strive for College program, which partners students with adult mentors who walk them through the college application and financial aid process.

“The old rules don’t apply, and technology and facility with it accelerates the ability of young professionals to have an impact.”

The company’s drive to make an impact is part of what Buckminster says is one of the biggest and most necessary changes he and other longtime company execs have undertaken: an upending of the rank-and-seniority model. “When I was starting out, there was way too much deference for experience level, seniority, and tenure,” he says. “That’s changed substantially, brought about by a range of new companies being run by very young folks. The old rules don’t apply, and technology and facility with it accelerates the ability of young professionals to have an impact.”

American Express has had to shift assumptions about who and what offers the greatest value. Mezi and Cake, for example, the two lifestyle start-ups acquired by American Express last year, were only a few years old with a handful of employees; previous acquisitions were more likely to have decades of history and hundreds of workers. Bringing on the two start-ups—Mezi offers a virtual travel assistant, Cake, financial technologies—Buckminster says, meant changing how the established business approached integrating the younger ones.

“It’s a totally different dynamic,” says Buckminster of the changes he’s seen at American Express, “but rewarding. Every year, I learn a ton I didn’t know before.