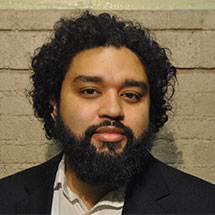 Boston University’s MFA Playwriting Program is pleased to  announce the appointment of Nathan Alan Davis as Associate Professor of the Practice of Playwriting. After a national search, Davis officially assumes the role this month.

Davis, a playwright and screenwriter who has served as lecturer in Theater and as the Berlind Playwright-in-Residence at Princeton University, replaces Professor of the Practice of Playwriting Kate Snodgrass, who retires this summer after 35 years at Boston University.

“The MFA Playwriting Program at BU has a strong and vibrant tradition, rooted in deep respect for both the artistic and literary value of the written word,” Davis says. “I am honored that Kate and her colleagues at BU have chosen me to lead the program into its next chapter. In the months and years ahead, I look forward to working in the service of playwrights with undeniable voices who will make indelible contributions to the field.”

“I’m excited and honored to hand the MFA academic reins to Nathan,” Snodgrass says. “He is a gifted writer himself with a lyrical yet muscular command of language. In this, he reminds me very much of Derek [Walcott], our founder. Plus, Nathan is a consummate teacher of playwriting, and he finds great joy in working with passionate writers ready to try new things. We couldn’t have found a better leader for our graduate program!”

Davis is an alumnus of the University of Illinois at Urbana-Champaign, Indiana University Bloomington, and The Juilliard School. His plays have been produced, commissioned and developed by New York Theatre Workshop, Roundabout Theatre, Arena Stage, Seattle Rep, McCarter Theatre, Cygnet Theatre, Skylight Theatre, and Williamstown Theatre Festival, among others. Awards and honors include a Windham-Campbell Prize, a Whiting Award in Drama, a Steinberg Playwright Award, and the Stavis Playwright Award.