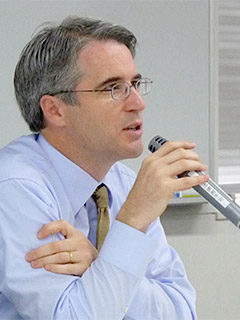 Associate Dean, Professor at the Pardee School of Global Studies

William Grimes, new Faculty Fellow at GEGI, is Associate Dean for Academic Affairs and Professor of International Relations at the Frederick S. Pardee School of Global Studies at Boston University, where he has taught since 1996. He previously served as chair of the Department of International Relations and as the first director of the BU Center for the Study of Asia.  He has also spent time as a post-doctoral researcher and as a visiting assistant professor at Harvard University.

Professor Grimes has spent time as a visiting researcher at the Japanese Ministry of Finance, the Bank of Japan, and several universities in Japan and Australia. He has been the recipient of various fellowships and awards over the years, including two Fulbright fellowships and a book-writing grant from the Japan Foundation Center for Global Partnership. He is an active lecturer in Japan and the United States in both academic and policy venues and has been recognized for his teaching and advising at Boston University. Professor Grimes is committed to policy-relevant research and works regularly with government officials and financial professionals, particularly from the United States and Japan.