Artistic Director of BPT, Professor of the Practice of Playwriting 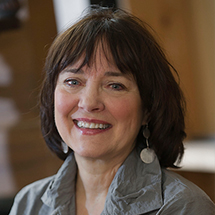 KATE SNODGRASS is the Artistic Director of Boston Playwrights’ Theatre and of the Elliot Norton Award-winning Boston Theater Marathon (which she co-founded). She is a Professor of the Practice of Playwriting at Boston University. Snodgrass is a former Kennedy Center American College Theater Festival (KCACTF) National Chair of the Playwriting Program, a former vice president of StageSource, Inc., and a member of Actors’ Equity, A.F.T.R.A., and the Dramatists Guild. A former playwriting fellow with the Huntington Theatre Company, Snodgrass is the author of the Actors’ Theatre of Louisville’s Heideman Award-winning and much-anthologized play Haiku. The play has been performed around the world and translated into German, Portuguese, and Gaelic, and the film Haiku premiered at the 1995 Boston Film Festival. Her play The Glider (BPT, 2004) was nominated for the National American Critics Association’s Steinberg New Play Award and won the 2005 IRNE Award for Best New Play. Snodgrass’s play Observatory (BPT, 1999) was the winner of an IRNE Award for Best New Play, the 1998 Provincetown Theatre Company’s Playwriting Award Competition, and the Best Play Award at the 2000 Southeastern Theatre Conference. Snodgrass was a member of the former Circle Repertory Theatre Lab. Her short plays L’Air Des Alpes, Que Sera, Sera, Critics’ Circle and Wasteland have been published/anthologized by Cedar Press, Dramatic Publishing Company, Bakers Plays, and Smith and Kraus, respectively.

As an actor, Snodgrass studied at Kansas University, Wichita State University, The London Academy of Music & Dramatic Art (LAMDA), and in NYC with disciples of Michael Chekhov and Sanford Meisner. She has appeared at Lincoln Center, in regional theatres, and on national television. Her directing credits at Boston Playwrights’ Theatre include Blackout and Prayin’ Hands by Tom McClellan, Michael Moss’s Twosome, Kimberly Brown’s Re: Pirth, Karen Zacarias’s The Barechested Man, Joyce VanDyke’s Love in the Gulf, and Patricia Smith’s Life After Motown. Snodgrass has taught at Wellesley College, Brandeis University, MIT, The American Repertory Theatre (A.R.T.) Institute for Advanced Theatre Training at Harvard, Suffolk University and Lesley University, among others. A Virginia Center for Creative Arts fellow, she holds two BA degrees from Kansas University and Wichita State University, respectively, and a masters degree in creative writing from Boston University. Snodgrass is the recipient of the Leonides A. Nickole Theatre Educator of the Year Award from the New England Theater Conference, 2008, and the first recipient of the Milan Stitt Award for Outstanding Teacher of Playwriting from the Kennedy Center American College Theater Festival (2010). She was StageSource’s 2001 “Theatre Hero” and the recipient of the 2012 Boston Theatre Critics’ Elliot Norton Award for Sustained Excellence. In 2015, she was awarded a Tanne Foundation grant for her passion and commitment to the theatre. Her one-act plays Bark’s Dream and The Last Bark with Steven Barkhimer, directed by Melia Bensussen, were commissioned and produced by Sleeping Weazel Theatre Company (2015, 2016).