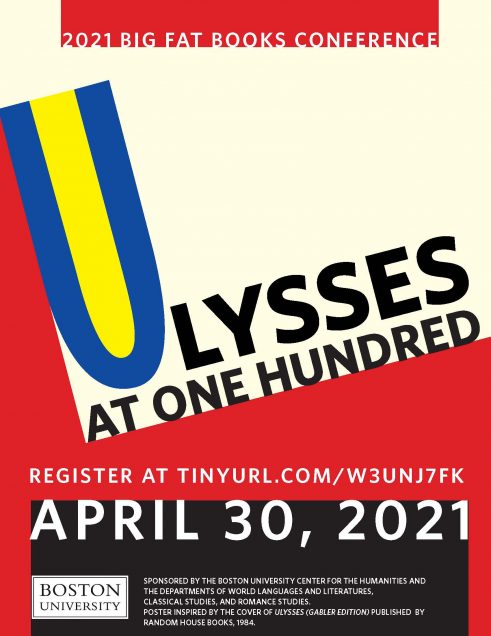 Published in 1922, Ulysses is now nearing its hundredth anniversary. The many and diverse questions the novel raises, including its relationship to Homer and its global impact, bring together Classical Studies and World Languages and Literatures with English, Romance Studies (Joyce’s most important intertext after Homer being Dante), History, and, given Joyce’s theological obsessions, Religion.

While Ulysses is universally seen as a seminal work of English Modernist literature, the issues it raises go beyond the purely literary. These include not only the relationship of the public and private spheres and of history and the individual, but also questions concerning Joyce’s self-exile from Ireland, the deliberate apparent exclusion from his narrative, set in 1904, of the Great War, his understanding of Ireland as a nascent and / or revived nation, problems of post-colonialism, and the place of Ulysses within an epic tradition including not only Homer, but also Virgil’s Aeneid and issues of Roman imperialism, Dante and problems of Christian hegemony, Shakespeare and the relationship of author to text, Milton and the relationship of epic to history, and even Mozart’s Don Giovanni.

Ulysses, in addition, deliberately introduces into the “high-brow” genre of epic an obsession with popular culture and a bumbling advertising man as protagonist. It also explicitly challenges popular conceptions of sexuality and gender relations and is a work obsessed with reception, and a specifically polyglot and post-colonial reception at that. The novel has experienced an extraordinary spread of interest throughout the globe over the course of the last hundred years, including in Russia, Japan, South America, China, India, the Arabic world, and Eastern Europe, a response that echoes Joyce’s own interest in setting the purely parochial onto a literary world stage. In addition, the history of the novel’s publication raises questions of censorship, copyright, international access and national appropriation, as Ireland’s initial and utter rejection of the work has been transformed into an adoption of it as definitively “Irish.” This effect also appears globally, as Ulysses raises questions about what it means for a novel to be universally acknowledged as defining the modern world, while yet so little read.

Our day-long symposium, titled “Ulysses at One Hundred” features a keynote address by Vicki Mahaffey (University of Illinois at Urbana-Champaign) and concludes with a student panel in which BU students currently studying the novel will comment on passages they have chosen.

The event will be held virtually and is open to all.

Vicki Mahaffey, University of Illinois at Urbana-Champaign:
Changing Perspective: Why Style and Structure Matter in Ulysses