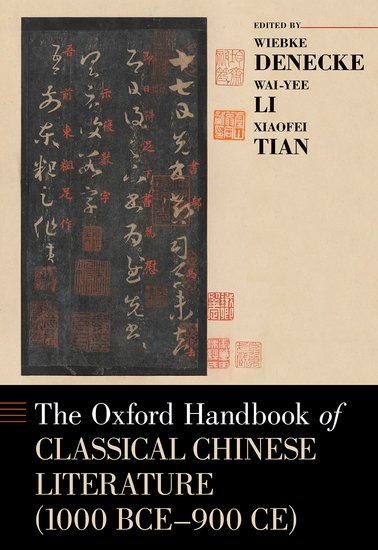 The Oxford Handbook of Classical Chinese Literature 1000 BCE through 900 CE (coedited by Wiebke Denecke, Wai-yee Li Xiaofei Tian. New York: Oxford University Press, 2017) aims to provide a solid introduction to the field, inspire scholars in Chinese Studies to explore innovative conceptual frameworks and pedagogical approaches in the studying and teaching of classical Chinese literature, and facilitate a comparative dialogue with scholars of premodern East Asia and other classical and medieval literary traditions around the world. The handbook integrates issue-oriented, thematic, topical, and cross-cultural approaches to the classical Chinese literary heritage with historical perspectives. It introduces both literature and institutions of literary culture, in particular court culture and manuscript culture, which shaped early and medieval Chinese literary production. It problematizes the gap between traditional concepts and modern revisionary definitions of literary categories and fosters critical awareness of how this has shaped the transmission and reception of literature and literary history. It discusses both canonical works and works that fall between the cracks of modern disciplinary divisions of “philosophy,” “religion,” “history,” and “literature.” Adopting a thematic approach, it traces the trajectory of ideas and motifs articulated across different genres, periods, and cultural spheres and lays the groundwork for comparisons with other literary cultures. Finally, it places early and medieval China in its regional context by including chapters on translation, on cultural interactions with the Northwestern regions, and on the literatures produced in Korea, Japan, and Vietnam in Literary Chinese, recapturing the functioning of the East Asian Sinographic Sphere.