“That’s so retarded” or “don’t be such a retard” are frequent statements I hear casually said around campus. When used by someone I am talking to I will usually ask him or her to choose a different word. I typically get several types of responses. Many people are apologetic and say, “Oh, sorry, I mean stupid.” Other people have tried to explain that the r-word is no longer associated with people with disabilities and it is just a synonym for stupid and therefore is okay to use. To me, these responses demonstrate that there is a larger problem than the use of the r-word. There is a gross misunderstanding about the meaning of the word and why it is offensive in the first place.

Since the word has become commonly used in informal speech, it is harder to see the connection between the original word meaning and the current informal use of the word. For this reason, it may be difficult to understand why the word is still considered offensive. The definition of the word retarded, according to Merriam-Webster dictionary is “Offensive: slow or limited in intellectual or emotional development”. At one point in time “mental retardation” was a medical term used to describe a person with an intellectual disability. However, since then the word has been replaced by the term “intellectual disability” because it is more accurate and accepting. The r-word is an exclusive term that furthers negative stereotypes about people with disabilities. It can be hurtful whether it is directed towards a person with a disability or when used as a synonym for “dumb” or “stupid”. When used in this way it is equivalent to saying people with disabilities are stupid. In addition, the real message of the sentence is lost because the r-word has a completely different meaning than the words “stupid” or “dumb”. There are many other words to choose from instead of the r-word that will better represent the intended meaning.

I was recently in a situation where a person was using the r-word, and because I felt uncomfortable, I did not speak up. Afterwards, I spent a lot of time thinking over this interaction because I was upset that I did not say anything. Not using the word “retard” is part of the solution, but it is equally as important to speak out against the use of this harmful word. Many people, when I’ve told them I am upset by the use of this word, do not even realize that they are being offensive. By speaking up and telling others that the word is offensive to me and many other people, I am spreading awareness about the cause instead of tacitly approving by my silence. Hopefully this will lead others to stop using the word and become advocates themselves. The more awareness we can spread, the better. If you are interested in more information or joining the cause, there is a wonderful campaign called Spread the Word to End the Word. Their website has more information as well as ways you can get involved.

Abby Lefebvre is a sophomore in the School of Education, majoring in Special Education.

By Allison Nadler, SED 2017 I appreciate language. I love the fact that different cultures have their own language system, various parts of the world have different accents, and other… Read more

By Noah Segal, SED’16 On January 28, 2016, the toy company LEGO announced that starting this summer, they will be selling a wheelchair for their popular toy sets. This is… Read more 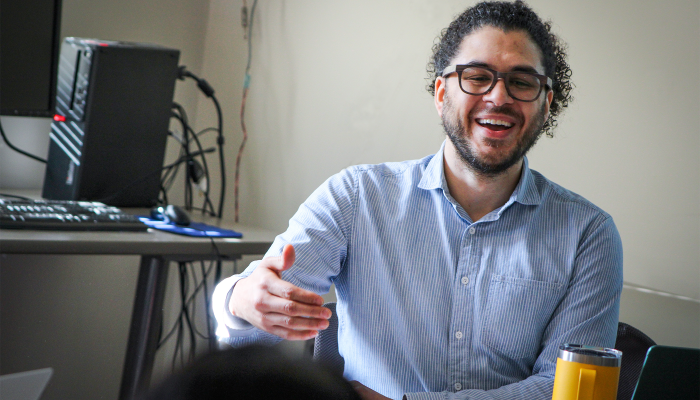 Interview by Angela Xie, SSW ’24 As a Latino first-generation college graduate, Michael A. Medina is interested in the systems and contexts that support student success. An assistant professor of… Read more

Promoting Strength and Resilience among Transgender and Nonbinary Adolescents

Before getting his PhD, William Delgado worked as an economic consultant to the Inter-American Bank, the Colombian Health Department, and other organizations. Today, he’s a research assistant professor at BU… Read more