BU Wheelock is the recipient of a $500,000 gift that will fund a new scholarship to be awarded to Black and Latinx students earning graduate degrees in our teacher preparation programs. This new scholarship will be named in honor of educator and civil rights advocate Ruth Batson, who through leadership roles with the NAACP and Massachusetts Commission Against Discrimination, helped push the city of Boston and toward the desegregation of its public schools. She earned her master of education degree from Boston University in 1976.

Assistant Dean for Enrollment & Student Affairs Katharine Nelson notes that scholarship recipients will be identified based on the information contained in their application materials. Any applicants who have questions about the scholarship are welcome to contact Graduate Enrollment at whegrad@bu.edu.

Maureen Mollahan, BU Wheelock’s Assistant Dean for Development & Alumni relations, commented on what inspired the gift that will fund this scholarship, and the donors who made it.

“The donors are a couple who have been very involved in supporting and promoting opportunity in education,” shares Ms. Mollahan. “They chose to work with us because of our partnership with BPS and our shared commitment to access to graduate education for young educators.”

Ms. Mollahan describes the central purpose of this scholarship as creating a more diverse teacher candidate pool by expanding access to the BU Wheelock master’s programs that prepare highly-skilled educators. She says that the donors hope recipients of Ruth Batson Impact and Equity Scholarship Fund awards go on to teach in urban school districts after they complete their studies at BU.

“We considered a number of educators and leaders, past and present, from Boston when deciding who to name this scholarship for,” explains Ms. Mollahan. “We ultimately chose to honor Ruth Batson because of her career as an educator, her service to the people of Boston, and her connection to Boston University.”

In addition to earning her graduate degree from BU, Ruth Batson directed BU’s school desegregation research project from 1975 to 1981. She was the first African American woman to serve on the Democratic National Committee; the first woman elected President of the NAACP’s New England Regional Conference; and helped launch the Metropolitan Council for Educational Opportunity (METCO), the country’s longest-running school desegregation program, in 1966. Her papers are held at the Radcliffe Institute’s Schlesinger Library, at Harvard University. 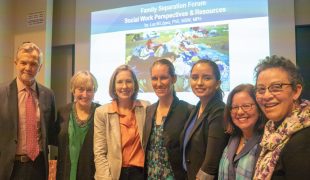 BU Wheelock is the recipient of a $500,000 gift that will fund a new scholarship to be awarded to Black and Latinx students earning graduate degrees in our teacher preparation… Read more