Ventricular fibrillation is a condition marked by unsynchronized contraction of cardiac muscle cells. The resulting lack of blood flow can cause damage or death if not promptly treated. With the advent of smaller defibrillation generators, catheter electrodes and “active can” technologies, implantable defibrillators (AICD) employing high-energy biphasic shocks have become the treatment of choice for patients with arrhythmias that do not respond to drug therapy. Recent computer modeling studies in our laboratory of myocardial current distribution during defibrillation [1] have shown a good correlation with the overall mean of reported clinical defibrillation metrics. These findings suggest a possible use for computational models in the presurgical planning of AICD implantation. The goal of this research is to investigate the predictive capacity of such computational models by comparing patient-specific simulated and clinical defibrillation metrics. 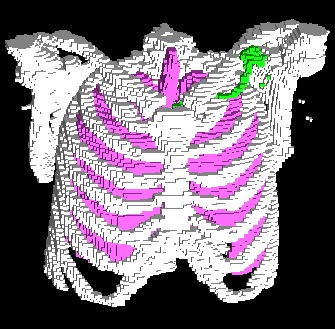 Ten patients with implanted AICD have been recruited for this study. Patient specific models are constructed from segmented cross-sectional computerized tomographic (CT) images obtained post-implant from Brigham and Women’s Hospital. The segmented data is imported into a computer-aided engineering package (I-DEAS) and the finite volume method is used to simulate internal defibrillation episodes.

Two methods are used to generate the finite volume models. In the first method, the 3-D model of the patient’s conductive anatomy is reconstructed using NURBS surfacing techniques (fig.1) and the resulting geometry is discretized using tetrahedral volume elements. In the second, the 3-D model is constructed with a structured meshing algorithm, in which each voxel in the segmented image data set is defined as a volume element (fig.2). 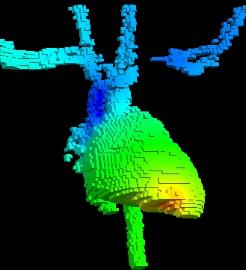 Fig.3 Electric potential distribution in the heart and blood vessels.