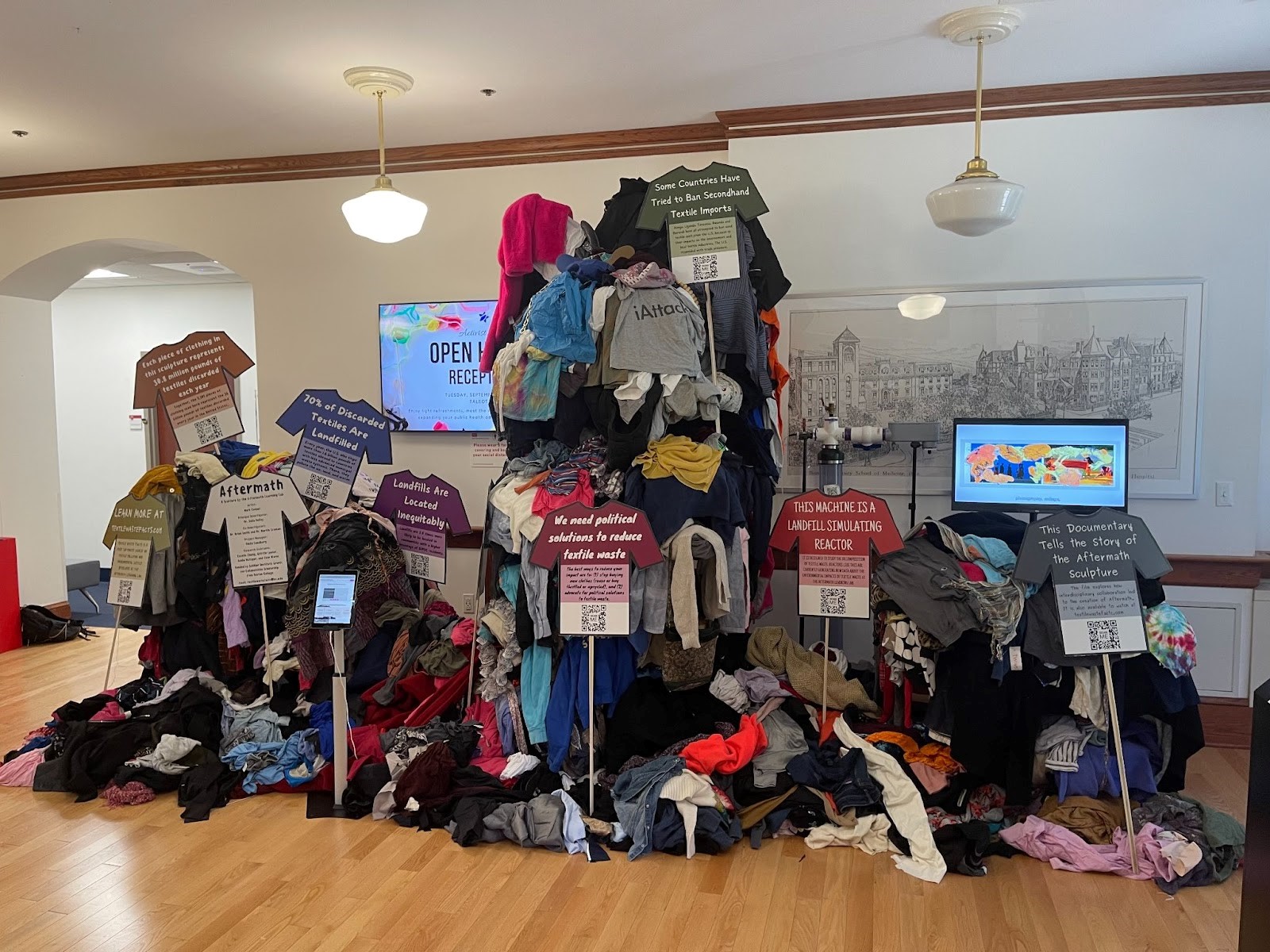 The Aftermath of Fast Fashion

How Discarded Clothes Impact Public Health and the Environment

Every year, people in the United States throw out more than 34 billion pounds of used textiles. Divided across the population, that’s more than 100 pounds of textile waste per person each year.

However, textile waste generation does not occur equally. People with higher incomes generate on average 76% more clothing waste than people with lower incomes.

Once textiles are discarded, 66% of them are sent to landfills in the U.S. where they decompose — some quickly and others over hundreds of years. While landfills in the U.S. are designed in theory to capture and contain landfill gasses and polluted waters that emerge during the decomposition process, numerous health concerns have been reported by people living near landfill sites. Landfills are also not located equitably. Landfills are 2.8 times more likely to be located in areas with a higher percentage of BIPOC residents.

Ultimately, only 15% of used textiles are theoretically ‘recycled,’ and of those, up to half are simply shipped abroad to other countries, largely in the Global South where they land in landfills there. These countries often have less advanced municipal waste systems, meaning that the environmental damage and health impacts of decomposing textiles will be much greater there than they would be in the United States.

As Matilda Lartey, an environmental activist and artisan in Ghana, explained in a recent panel discussion, textile waste from the United States has multiple impacts on countries like Ghana:

Many people in the Global North (primarily the US and Europe) assume when they donate clothes to organizations like Salvation Army, Goodwill, or Planet Aid that they will be reused locally, but this is typically not the case. The amount of used clothing that thrift stores in the United States receive greatly exceeds the amount that they are able to sell here. Thus their solution is to ship the excess clothing abroad.

But this system of shipping unwanted used clothing to other countries relies on a major assumption — that these countries ‘want’ it. Increasingly, that is simply not to be the case. Rwanda, Kenya, Tanzania, Uganda, and Burundi have all either banned or attempted to ban used clothing imports.

While the issue of shipping clothing abroad often spurs a polarized debate between those concerned about its environmental and health impacts and those convinced that it benefits the countries who receive it, the real issue, at the end of the day, isn’t the fact that clothing is being shipped abroad but rather that the amount of clothing being shipped is far too great and the quality of the textiles sent is too low.

That’s where Aftermath comes in!

Aftermath, an environmental and public health sculpture is a large-scale art advocacy installation that explores the serious impacts of textile waste. As part of its upcoming national tour, the sculpture is on display at the Boston University School of Public Health from September 19 to October 7, 2022, in the lobby of the Talbot Building.

Created by developmental psychologist and social activist Julia DeVoy (associate dean of undergraduates at Boston College. LSEHD) and her long-time collaborator Dielle Lundberg (research fellow at BUSPH, public health data analyst, and multimedia artist), alongside premier artist Mark Cooper (professor at Boston College), the Aftermath sculpture brings together textiles, a landfill simulating reactor, and technology to ask: “What do we do with the mountain of used clothing that is being generated every single year in the United States?”

While the Aftermath sculpture is designed to invite more questions than answers, for those left yearning for solutions, the sculpture provides several entry points for learning. Embedded within the sculpture is activist ‘protest’ signs in the shape of everyday T-shirts that contain QR codes that link to Textile Waste Facts — a free and public 30-minute crash course on textile waste and environmental justice developed in tandem with the Aftermath sculpture. The multimedia learning modules include firsthand accounts from environmental activists and people affected by fashion pollution in the Global South, interactive data visualizations, and an opportunity to create your own personal action plan for contributing to individual and policy-level changes.

Ultimately, Aftermath challenges its audience to reframe fashion textile pollution as an issue of global public health and environmental justice that can only be solved through sustained, transdisciplinary and collective efforts to achieve real political and applied action changes.

While it does serve as a warning, it points to many generative possibilities too — most importantly the power of interdisciplinary, collaborative, and global dialogue to intervene in a climate crisis and create shared value for real people, planet, and purpose.

The Activist Lab at the School of Public Health is partnering with Dielle Lundberg to bring “Aftermath” to the Boston University Medical Campus. The sculpture will be on display in the lobby of the Talbot Building from September 19 through October 7. The Activist Lab is also hosting a panel discussion on October 6 that explores the public health consequences of textile waste and environmental racism and the role that art can play in advancing public health.

The Aftermath of Fast Fashion: How Discarded Clothes Impact Public Health and the Environment