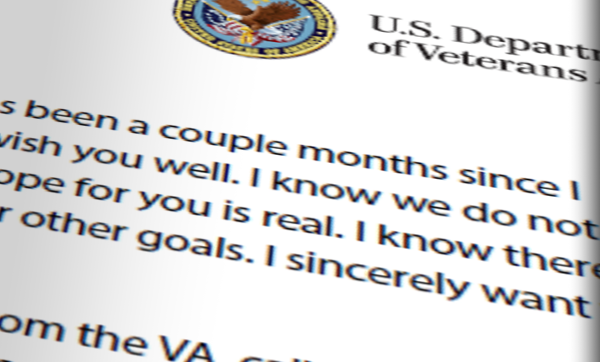 Veterans who engaged with the VA’s Veterans Crisis Line received encouraging letters after the call from a fellow veteran or provider, as part of the VA’s Caring Letters initiative. Credit: US Department of Veteran Affairs.

A new study coauthored by Kiersten Strombotne and Melissa Garrido evaluated a Veteran Affairs suicide prevention initiative that sent letters of support to veterans after they contacted the VA’s crisis hotline.

In its 2018–2024 strategic plan, the US Department of Veterans Affairs (VA) declared preventing veteran suicide as its highest clinical priority, as veterans have a 50 percent higher risk of suicide than people who have not served. Veterans who contact the VA’s Veterans Crisis Line (VCL) have particularly high rates of suicide within one month of their call.

To address this persistent public health issue, the VA implemented a Caring Letters project in June 2020 to support callers in the weeks after they contact the VCL. First tested decades ago in the US, Caring Letters is an evidence-based suicide prevention intervention in which multiple messages of support are mailed to individuals at high risk of suicide. But this VA initiative is the first large-scale implementation of Caring Letters for a crisis line.

Through the program, veterans who engage with the crisis line receive follow-up letters after their call from a peer veteran or a provider. To evaluate this initiative, the VA partnered with a research team, including School of Public Health researchers, to assess whether Caring Letters reduces the risk of suicide behaviors among veterans, with a goal to inform future suicide prevention strategies and support services for veterans who contact the crisis line.

The results of the initial 12-month evaluation, published in the journal Health Services Research (HSR), indicate that the Caring Letters initiative for veterans is a feasible suicide prevention program that reached many VCL callers and received widespread, positive feedback from both veterans and VA project staff.

The primary goals of this first-stage analysis were to gain qualitative insight into veterans’ perspectives on the Caring Letters as a follow-up form of support to their VCL call. According to the study findings in HSR, veterans reported that receiving the letters made them feel cared for and connected to others, as well as feeling a renewed sense of faith in the VA.

“The initial results really demonstrate the remarkable reach of the intervention,” says study coauthor Kiersten Strombotne, assistant professor of health law, policy & management, and an investigator at the Partnered Evidence-Based Policy Resource Center (PEPReC) at the VA Boston Healthcare Service. “Writing letters to veterans to let them know that they’re seen and they’re remembered—I think something as simple as that can be incredibly important for people in vulnerable situations.”

During the first 12 months of the program, 543,353 letters were mailed to 102,709 veterans who contacted the VCL, and only 36 veterans decided to opt out of the program.

“Getting a letter made me feel like maybe someone’s finally listening to me.”

In interviews with the research team, veterans reported that they called the VCL to receive support for life challenges such as social isolation, personal loss, trauma from military sexual assault, legal difficulties, and feeling abandoned by the VHA. Subsequently, callers who opted into the program received monthly messages for the first four months after their call, and then every other month thereafter, for a total one year. The messages included words of support, as well as VA mental health resources.

While a few participants said they thought that letters were insufficient means of follow-up support, the majority of participating veterans reported that they approved of the letters, with feedback revealing that the letters invoked a sense of security; a renewed sense of hope and/or faith in the VHA; a sense that someone cares about them; a sense of comradery; a sense of purpose or meaning; and enjoyment from an unexpected surprise.

A few of the veterans’ comments:

The research team is currently conducting additional analyses of the full program, including a quantitative evaluation to compare patient health outcomes and VCL utilization rates with crisis line callers prior to the start of the initiative.

“Veteran feedback has been essential to the development of Caring Letters and their implementation for crisis line callers,” says study coauthor Melissa Garrido, research associate professor of health law, policy & management, and associate director of PEPReC. “It’s encouraging to see the positive reception of Caring Letters. Our next steps are to see whether this positive reception translates into engagement in regular mental health care and improved mental health outcomes among veterans who have contacted the crisis line.”

The lead author of this study was Mark Reger, chief of psychology at the VA Puget Sound Health Care System and professor of psychiatry & behavioral sciences at the University of Washington School of Medicine. The study team also included coauthors from the VA, VHA, and University of Arkansas for Medical Sciences.

Starting July 16, 2022, anyone experiencing a mental health crisis can also call 988, the new, three-digit Suicide & Crisis Hotline in the US.