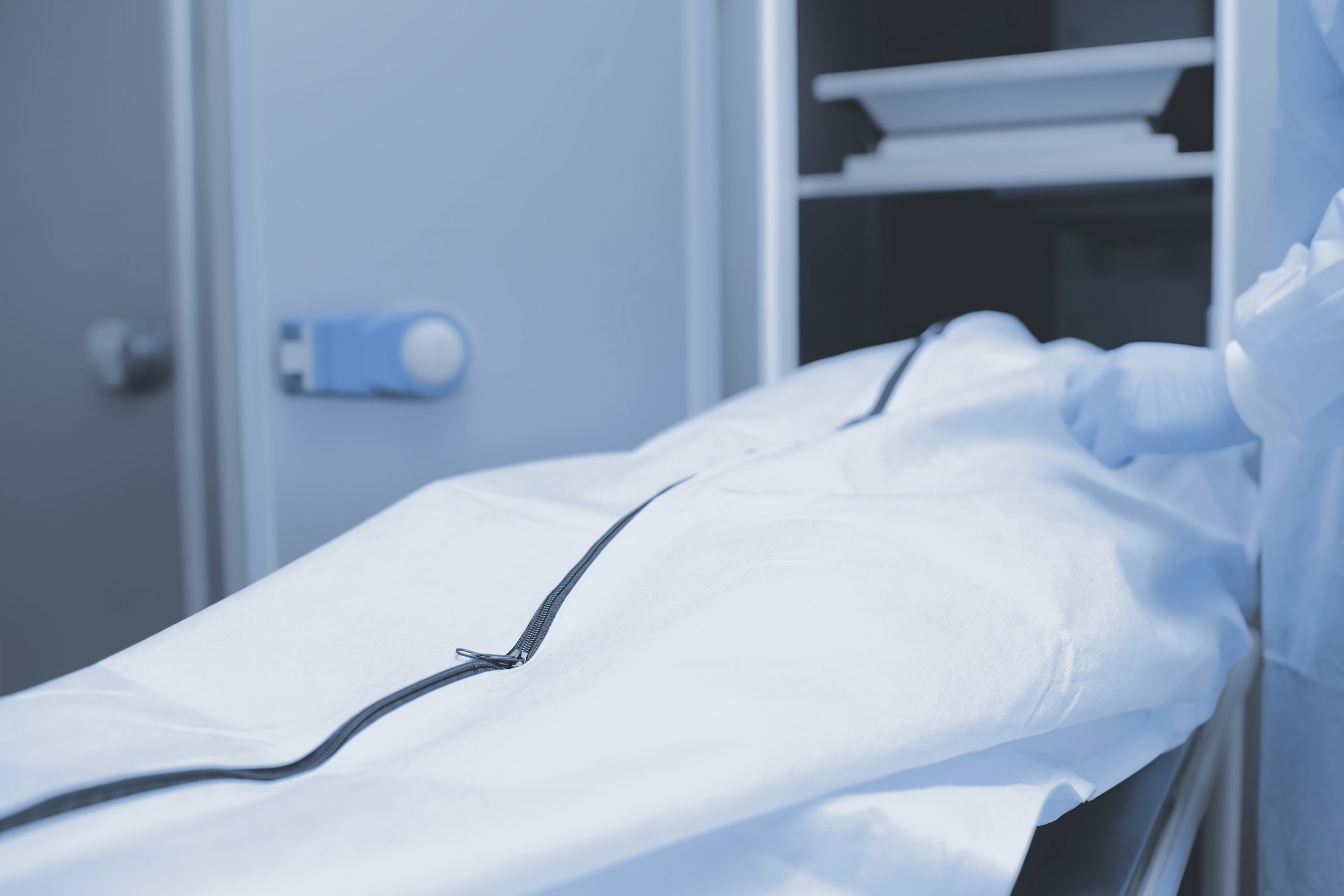 A new study led by Christopher Gill and Lawrence Mwananyanda found that nearly 90 percent of deceased individuals at a Zambian morgue were infected with COVID-19, but only 10 percent tested positive while alive.

Since the start of the pandemic, Africa has reported more than 12 million COVID-19 cases and 255,000 deaths—totals that seem vast, but pale in comparison to reported cases and deaths among countries in North America, Europe, and Asia. By contrast, the United States has amassed more than 85 million cases and 1.01 million recorded COVID-19 deaths to date, including as many as 5,000 deaths in a single day during the winter 2021 surge.

A new study led by School of Public Health researchers suggests that the reported COVID-19 death toll in Africa is substantially higher than official records indicate.

Available as a preprint on medRxiv ahead of peer-reviewed publication, the study found that nearly 90 percent of deceased individuals at a crowded morgue in Lusaka, Zambia were infected with COVID-19 during peak transmission periods between July 2020-June 2021—and only 10 percent of these individuals tested positive for COVID while alive.

“It is always challenging to know whether someone died with COVID or died from COVID,” says Gill, who has studied a wide range of infectious diseases, particularly pediatric illnesses, and vaccines in the US and abroad. “What we can say is that a majority of the deceased presented with some constellation of respiratory symptoms on top of the positive PCR test.”

Furthermore, he says, the research team performed lung biopsies on a subset of the decedents, and found evidence of lung pathology consistent with COVID disease. “This does not completely eliminate the possibility that some of the deaths could have been misclassified as COVID deaths when, in fact, the virus was a coincidental finding—but overall, the evidence supports COVID as the cause of death in most cases.”

The findings build upon the researchers’ previous postmortem surveillance of COVID-19 at the same morgue in Lusaka—but among a much smaller group of people and within a shorter time period—published in The BMJ in February 2021. The study found that 15-19 percent of 70 decedents tested positive for the virus between June-October 2020, with the majority of deaths occurring outside of hospitals and in communities where COVID-19 testing was sparse, if not nonexistent.

The new results represent 1,118 decedents among three waves of the pandemic, stemming from the more contagious Beta and Delta variants and peaking in July 2020, January 2021, and June 2021. Similar to the previous findings, Gill and Mwananyanda found that the majority of deaths occurred outside of medical facilities, and in impoverished communities. Across the study time period, 32 percent of the deceased individuals tested positive for COVID-19, but that percentage rose to 89.3 percent during the peak times, and 4 out of 5 deaths occurred in the community instead of at a hospital.

This is an example of what it means to be a resource-poor country.

“This is an example of what it means to be a resource-poor country,” Gill says. “We tend to think of this just in terms of health and disease, but it also reflects the ability of poorer countries to map the impact of diseases on its populations. Rather than an ‘African paradox,’ the far simpler explanation is that COVID-19 has affected African countries just as the virus has everywhere else, but has gone undocumented.”

Earlier in the pandemic, “there was often an assumption that COVID-19 deaths would be obvious and easy to find,” Gill says. But that assumption has been disproven over the past two years, he says, pointing to excess mortality statistics in New York City, as one example, in which excess COVID-19 deaths have far surpassed reported case that were diagnosed while people were living.

“That ‘excess mortality’ tells us that it is not so easy to link a viral infection to a death, even in the midst of a pandemic, and even when the suspicion of COVID-19 should be high,” he says. “It is simply a reflection that our capacity for postmortem surveillance is rarely complete. If we take that lesson from NYC to Lusaka—a city that is extremely poor and has very few resources for surveillance—it is easy to see how COVID-19 deaths could be undercounted. This is one example of what it means to be a resource-poor country.”

The reasons for these higher death counts are still unclear. Many surmise that Africa’s younger population or greater exposure to COVID-19 or other diseases, such as malaria, may produce greater immunity to severe cases and deaths—with some officials stating that a high number of deaths would not go unnoticed in local communities.

While more and more experts believe that the COVID-19 burden in Africa has been underreported, some are still hesitant that the actual death toll is drastically different from government reports. Some experts have speculated that Africa’s younger population or greater exposure to COVID-19 or other diseases may have led to asymptomatic cases, or greater immunity to COVID-19 and fewer hospitalizations or deaths. Others have gone as far as to say that a death in Africa “never goes unrecorded.”

However, the team’s work disproves that claim conclusively. The fact that the majority of COVID-19 deaths (more than 80 percent) occurred in the community—where cause of death surveillance is completely absent—“shows how easy it is to fall into the trap of misconstruing the ‘absence of evidence’ as ‘evidence of absence,’” Gill says.

His team’s postmortem surveillance of a variety of infectious diseases, including respiratory syncytial virus (RSV) and pertussis, in Lusaka for the past six years has captured similar measures of excess mortality that are much higher than official estimates.

“We have found that RSV deaths were far more common than had been assumed, and the same was true for whooping cough deaths, and now COVID,” he says. “Our data indicate that many infants appear to be dying of SIDS [sudden infant death syndrome].” The common factor: there was a substantial burden of these diseases in community settings that had been previously unrecognized (and thus, unreported), and was easily identified with systematic surveillance. “The explanation is that there is a profound lack of resources for postmortem surveillance of community deaths in Lusaka. In fact, we know very little about how the majority of deaths in Lusaka occur or why.”

Another notable finding from the preprint is that COVID-19 was detected evenly among all ages, rather than skewed towards older adults. In a subsequent project, Gill and team will conduct minimally invasive tissue sampling among deceased children with acute respiratory symptoms, to better understand whether and to what extent COVID-19 may have played a role in their deaths.

He hopes that the latest study findings increase awareness among health experts, government officials, and the general public, of the true toll of the pandemic in Lusaka, and likely throughout Africa. Wider access to rapid tests and vaccines remains essential, he says.

“I would love to believe that we have seen the worst of COVID-19 at this point, but this disease has surprised us in the past,” Gill says. “It is better to be prudent and take this opportunity to vaccinate as much of the population as we can, particularly now, when the healthcare systems are not under as much acute stress as they were in the worst days of 2021.”

Click here to listen to a BBC interview with Gill about the COVID-19 death toll in Africa.