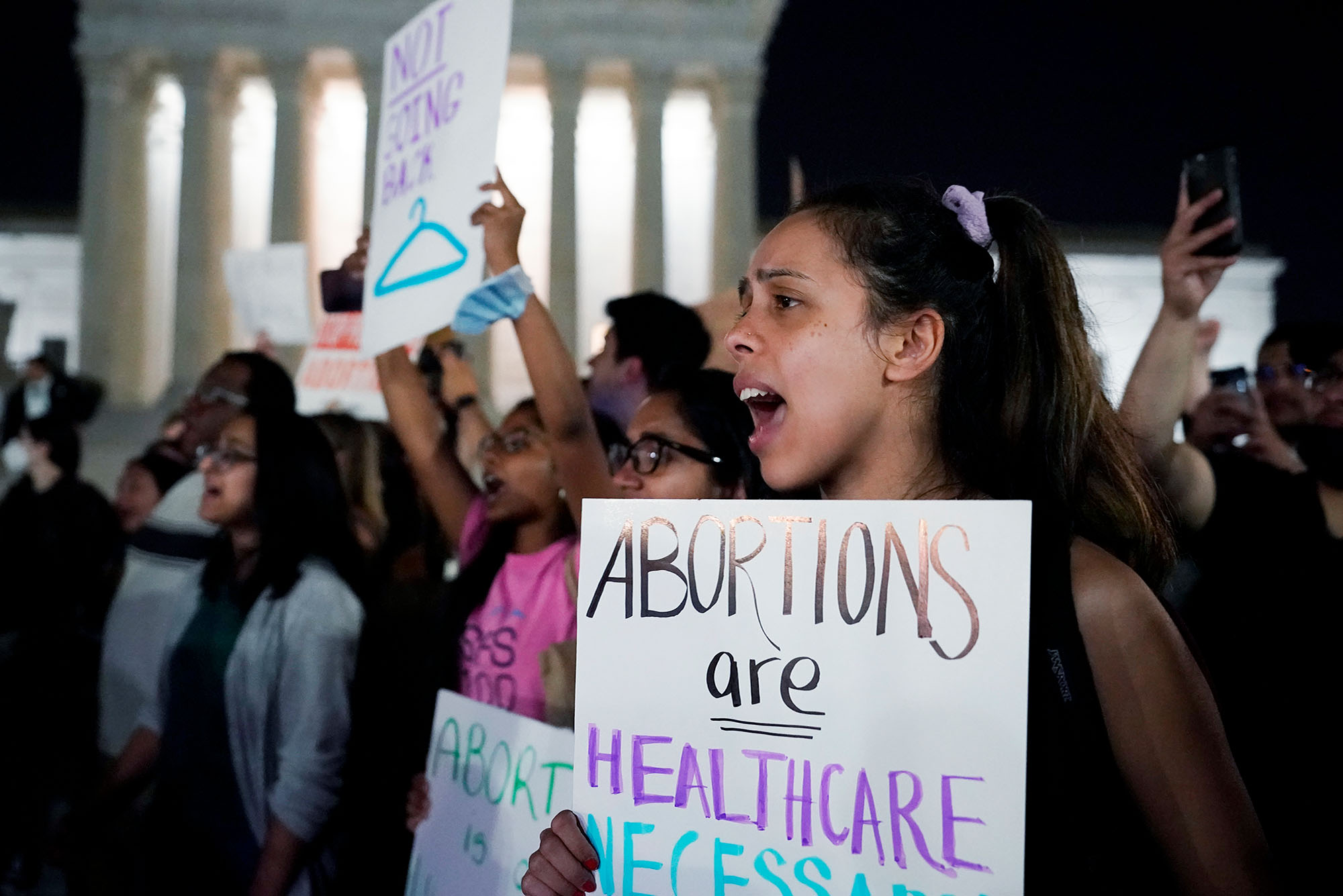 Nicole Huberfeld discusses the controversial document, the future of abortion, and what comes next.

Protesters on both sides of the abortion debate descended on the US Supreme Court Monday night and into Tuesday after a leaked secret draft of a US Supreme Court opinion indicated that a majority of justices support overturning Roe v. Wade,after almost 50 years of legalized abortion rights in America.If finalized, possibly as soon as this summer, the bombshell could trigger a cultural tsunami across American life, forcing some women to travel to another state for an abortion and putting the divisive issue at the heart of the fall midterm elections.

“We hold that Roe and Casey must be overruled,” Justice Samuel Alito writes in the document, labeled as the “Opinion of the Court,” and obtained by Politico. “It is time to heed the Constitution and return the issue of abortion to the people’s elected representatives.” He also wrote: “The inescapable conclusion is that a right to abortion is not deeply rooted in the Nation’s history and traditions.”

Draft opinions are written after the justices have taken a private vote on a case before them. But because they are often revised multiple times before a formal ruling is issued, and some justices might change their minds during that process, the drafts are almost never seen by the public. That’s what made the Politico story on Monday about the leaked draft so shocking.

A final decision in the abortion case Dobbs v. Jackson, involving Mississippi’s ban after 15 weeks of pregnancy, will be issued by June. Roe, decided in 1973, permits abortion before a fetus can survive outside the womb, typically about 23 weeks.

In anticipation of Roe’s possible demise since the court became more conservative-leaning under President Trump, states have been either codifying or curtailing abortion access in recent years, including Massachusetts, where abortion will remain legal, whatever SCOTUS decides.

BU Today spoke with Linda McClain, the School of Law Robert Kent Professor of Law, and Nicole Huberfeld, a LAW professor of law and the School of Public Health Edward R. Utley Professor of Health Law, Bioethics, and Human Rights, about the leaked opinion, the future of abortion, and what comes next.

with Linda McClain and Nicole Huberfeld

BU Today: How would this play out if Roe v. Wade is overturned?

Huberfeld: If it’s overturned, we’ll end up with a patchwork of state laws, some which may criminalize it and some which will protect it, like Connecticut or Massachusetts. Where you live will depend on what kind of healthcare you will be able to get.

Is there any precedent for a law being on the books for this long, close to 50 years, and then being reversed?

Huberfeld: It has happened. But very rarely. One example the court points to in this draft to justify this radical change is the difference between Plessy v. Ferguson [an 1896 case] and Brown v. Board of Education [a landmark 1954 ruling that said it was unconstitutional for state laws to establish racial segregation in public schools]. Plessy ensconced the idea of “separate but equal” when it came to the education of students, but Brown said that separate is inherently unequal and that Plessy is wrong.

Overturning Roe would allow states to decide abortion for themselves, but they’ve been doing that for decades, short of outright abolition, since the 1992 Planned Parenthood v. Casey decision. Is there less here than meets the eye?

McClain: It’s true the states have been going their own way since Casey relaxed Roe’s requirements and allowed more latitude for state regulation. On the other hand, even as interpreted by Casey,there were still limits on what states could do, and this draft opinion would blow that framework apart in a couple of ways. One is the viability line; whatever regulation Casey opened the door to, they still had to respect the principle that women make the ultimate choice up to viability. If a case would reach the Supreme Court that purported to restrict abortion prior to viability [or] an outright ban, that could not survive. Now the Court’s saying a 15-week ban survives under this new rational-basis test that they’ve announced.

Now what happens is, whatever regulation a state adopts, including a total ban, the only standard is, is there a rational basis for this law? Is there a legitimate interest the state’s furthering? This opinion announces a whole bunch of possible interests, including ones that neither Roe nor Casey discussed, like minimizing fetal pain, avoiding discrimination based on race, sex, or disability.

Are you surprised that the Court is actually prepared to overturn Roe?

Huberfeld: I think I was hoping that [Chief Justice John] Roberts could craft some kind of more measured opinion. That seemed to be the kind of question he was asking during oral arguments in the Dobbs case, if 15 weeks was enough, and could that be an interpretation of Roe. But the opinion very much reflects the opinion of the justices that joined the majority. It is a big deal to overrule 50 years of doctrine. The majority of the opinion is not well reasoned in my view. So, I am surprised how it is written and how strong of a stance it takes. But I am not sure I am surprised that this could happen. It’s important to remember, however: this does not actually change the law of the land. This is not an issued opinion.

Massachusetts Senator Ed Markey (Hon.’04) said that this Court might overturn abortion precedent with a “stolen” seat by Republicans. What would reversing Roe do to the Court’s public respect as an institution?

McClain: Justice Sotomayor made that powerful statement about whether the Court would survive the “stench” if it seemed that it was acting politically. The opinion acts [like], Oh we’re above politics, we wouldn’t act just because of public opinion. They act as if this has absolutely nothing to do with politics and everything to do with the Constitution. But in 1992, when Casey claimed it was upholding Roe,there were seven Republican-appointed justices. People were poised for that Court, dominated by Republicans, to overrule Roe. What instead happened is that three of those Republican appointees basically ruled that, while Roe went too far in some ways, they had to uphold it. They gave constitutional reasoning for it and a stare decisis argument—the famous language about a generation of women who have come of age relying on this.

Fifty years after Roe,we have a 6-3 hard-right Court. I think they’re a different kind of conservatives. Those other conservatives were concerned about preserving tradition. I think [Chief Justice John Roberts, who did not join the draft opinion majority] was hoping there was some way to claim they were still holding onto Roe and Casey, but jettisoning part of it. Maybe he didn’t want the damage to the Court in the public eye.

Markey also called for expanding the Court in light of an overturn. Is that a good idea?

McClain: I’m not an expert on court-packing, but I can see that this really makes people’s blood boil about the failure to give [President Obama nominee Merrick Garland] a hearing. And then the hasty effort to fill [Ruth Bader] Ginsburg’s seat three months before the election. I just couldn’t speak to whether this is a good solution, let alone whether it’s practical. The bottom line is that we have this hard-right Court that we’re probably stuck with for quite a long time.

Are secret votes common on the Supreme Court?

Huberfeld: Yes. They vote and then they go off and write the draft. There are drafts that circulate all the time. What’s unusual is the leaking.

Obviously the question a lot of people debate is whether something like abortion should be decided by the states, and differ from state to state?

Huberfeld: That’s certainly what [Justice Samuel] Alito said in his opinion. States should make their opinion and it’s up to their elected representatives. The problem is that actually misrepresents what is happening. His reliance on the function of the democratic process of states is naive, it’s disconnected from the reality of what’s happening with elections. This is the hard fact—that legislators across the country have tried to gerrymander voting districts so it’s much harder to legislate through democracy. Even if our democracy were well functioning, the reality is that women’s health has been a social health issue being used as a trading card in politics. This draft does not reflect public polling, which shows that people want abortion legal up to viability.

How will this news impact politics in America right now?

Huberfeld: History shows that politicians are playing to the primaries. People who vote in primaries tend to have more extreme views than the majority of voters. Extreme laws enacted in the abortion space are not unlike similar laws affecting the rights of LGBTQ+ people. It’s an issue designed to get people to vote, but it’s not designed to reflect the majority of opinions.

McClain: The Court points out that 26 states asked it to overturn Roe and Casey. Those states are poised to enact extremely restrictive laws, some of which are currently enjoined in court. Blue states are trying to find ways to protect people from out-of-state, to provide them more healthcare. The fact that there’s going to be a scramble to help people living in red states to get healthcare is very worrisome. The Court says nothing about the conditions of life for women in Mississippi and the high poverty rates of Black women. They like to talk about Black fetuses being aborted, and more of them are aborted than other fetuses, but that’s the only attention, really, to the crushing impact of this kind of decision.

One question was what happens to other due-process liberty cases, ones that relied on Casey,like Obergefell v. Hodges,the [same-sex] marriage equality case. We know Alito, Thomas oppose that opinion. This [draft] twice says, nothing we say here should imply that these other decisions are under attack. They claim this is a unique situation that involves taking potential life or unborn life.

How do you think the Supreme Court justices feel about the leak occurring?

Huberfeld: I imagine it would be upsetting to Roberts, an institutionalist. The justices tend to pride themselves on decorum, they tend to describe the Court as being slow, intellectual, driven by analysis. This would counter that narrative. I think at least some justices will be upset by this.