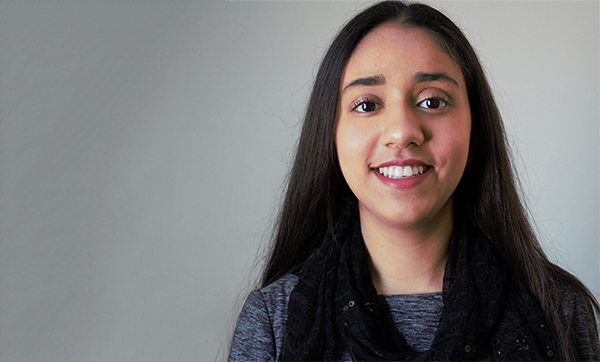 As president of the Health Policy & Law Student Organization, Senila Yasmin hopes to build community among students, particularly those in 4+1 and part-time programs.

After taking the Essentials of Public Health course as an undergraduate student at Boston University, Senila Yasmin’s eyes were opened to the field of public health.

“Going into it, I didn’t actually know what public health was,” says Yasmin. “But I have always been interested in medicine and health care, and public health seemed to fit right into those interests.”

Yasmin had originally planned to attend medical school after graduating from BU, but throughout her time in the course, taught by Sophie Godley, clinical assistant professor of community health sciences, she quickly realized that she wanted to do more than just treat patients. “I started to understand the intersection between public health and medicine, and I realized how much more there was to medicine than simply seeing a patient and prescribing a treatment,” she says. “I want to be able to prevent illnesses before they start and make it so my patients don’t need me as a physician in the first place.”

Yasmin enrolled in the 4+1 BA/MPH program and began taking classes at the School of Public Health in 2018.

At SPH, Yasmin, who is studying health policy & law with a context certificate in global health, is the president of the Health Policy and Law Student Organization (HPLSO). As a 4+1 student, she says that going back and forth between the Medical Campus and the Charles River Campus made it difficult to make connections with the SPH community, so she hopes to use her position within HPLSO to connect with students, particularly those who are not on the traditional MPH path, such as 4+1 students and part-time students.

“Especially with the pandemic, it has been really difficult to keep in touch with people, meet peers, and make new friends,” says Yasmin. “We have really made an effort over the last year to make HPLSO a place for fostering these connections and building community.”

Throughout each semester, the organization holds at least one event a month, ranging from community building events, such as game nights or trivia nights, to career panels and networking events with SPH faculty and alums.

“The MPH program goes by really quickly, so events like these are a great way to make connections and network with students, alums, and faculty outside of the classroom setting,” says Yasmin.

Another important piece of HPLSO is their advocacy-related events.

In April, the organization hosted an event in partnership with The Period Project at BUSPH, where they invited Representative Christine Barber, a co-sponsor of the I AM bill, which aims to increase access to menstrual products in public schools, prisons, and homeless shelters, to speak on a panel. Other panelists included a representative from the Massachusetts Chapter of the National Organization for Women (Mass NOW) and a researcher focused on the financial aspects of the bill.

At the end of the panel, event attendees were given information on how to find and contact their legislators, as well as a pre-written script that HPLSO developed with Mass NOW to assist them in advocating for the bill.

“Advocacy is a critical part of health policy,” says Yasmin. “Panel sessions like this give students an opportunity to hone these important advocacy skills outside of the classroom and put them into real-world practice.”

Bringing each HPLSO event to life is a team effort, says Yasmin, and overseeing the process has been a fulfilling experience for her during her time at SPH. “We have received a lot of positive feedback from students and faculty, which has been really exciting” she says. “The entire Department of Health Law, Policy & Management has been incredibly supportive of HPLSO and our work.”

Yasmin says that this kind of support is what drew her to attend SPH from the start. “I wanted to attend a school where I felt supported as a student, and during my time at SPH I have met many professors and mentors that have helped me accomplish my goals,” she says.

For both her work with HPLSO and her academic achievements, Yasmin is being recognized at the 2021 SPH Awards Ceremony as one of this year’s recipients of the Allan R. Meyers Memorial Award for Excellence in Health Policy & Management.

Yasmin will begin medical school at the Tufts University School of Medicine this summer and says she is grateful to be going in with a specialized public health perspective. “I am excited to take the skills I have learned while at SPH and move forward with my goal of becoming a public health-oriented physician who advocates for my patients.”