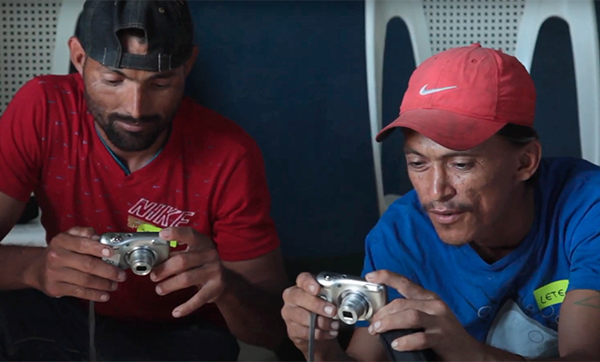 Still image from Photovoice: the voice of those affected by Mesoamerican Nephropathy.

Madeleine Scammell, associate professor of environmental health, helped develop the project, which has been selected as a finalist for the WHO Health for All Film Festival.

Since 2009, researchers from the School of Public Health have been collaborating with researchers in Central America to study the causes of an unusual form of chronic kidney disease, also known as Mesoamerican Nephropathy (MeN). The mysterious and deadly disease has disproportionately affected male agricultural workers and appears to be unrelated to traditional kidney disease risk factors, such as diabetes or hypertension.

Now, Madeleine Scammell, associate professor of environmental health, is a co-investigator on a documentary film project that aims to raise visibility about this disease in Nicaragua and amplify the voices of those most affected by it.

The project, titled “Photovoice: the voice of those affected by Mesoamerican Nephropathy,” has been selected as a finalist from over 1,200 entries for the World Health Organization Health for All Film Festival. The project was selected alongside 14 other videos in the Better Health and Well-Being category at the festival. Other categories include Health Equity, Universal Health Coverage, and Health Emergencies. The film festival jury will nominate a winner from each category for a Grand Prix, which will include a trophy and a grant encouraging the production of more films about health. The winners will be announced on May 13.

Photovoice is a form of Participatory Action Research that Scammell says is “the perfect combination of visual imagery and narrative storytelling.” The documentary project, which was filmed in early 2020, put affected people at the center of the conversation to raise awareness about MeN and its socioeconomic impacts on families and communities.

Scammell says that the MeN epidemic has gained international attention in recent years, assisted by the efforts of professional photographers and filmmakers documenting the devastating impact of the disease. “With this project, we really wanted the people most affected by the epidemic to share their own images to represent the impact of this illness on themselves, their families, and their communities.”

Participants in the project were given cameras to record and document their lives around four main themes: access to advanced care for the disease, such as drug therapies or dialysis; economic burdens and the challenges accessing food, drinking water, and housing; stigma and family burden, including caregivers’ mental health and well-being; and community resources. Each week, participants would come together with the researchers to discuss their experiences.

“Storytelling can be a therapeutic form of sharing and processing,” says Scammell. “By empowering participants to document and share their experiences with this very socially isolating disease, they are able to build connections and a sense of community.”

Scammell says that the participants in their epidemiologic studies don’t often find the same meaning in study results in the way that researchers do. “This project is giving these participants the opportunity to share information that is important for us to appreciate—to tell the story they think is the most important to be told.”

Along with the documentary film, the project includes a book containing participants’ photographs and quotes, as well as a forthcoming peer-reviewed manuscript discussing research results.

The WHO is inviting the public to contribute comments, questions, and/or reflections in the comment section of each film until May 10. Watch “Photovoice: the voice of those affected by Mesoamerican Nephropathy” and share your thoughts here.