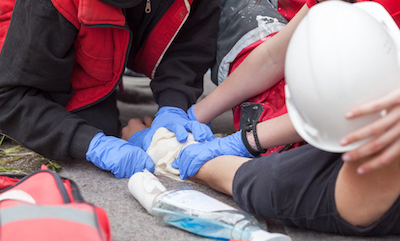 Suicides and opioid overdoses have both become much more common over the last two decades, and may be driving the recent decline in US life expectancy.

The study, published in the American Journal of Industrial Medicine, found that an injury serious enough to lead to at least a week off of work almost tripled the combined risk of suicide and overdose death among women, and increased the risk by 50 percent among men.

“These findings suggest that work-related injuries contribute to the rapid increase in deaths from both opioids and suicides,” says study senior author Leslie Boden, professor of environmental health. “Prior research has shown that injured workers are at increased risk of depression, have been treated frequently with opioids, and have suffered long-term earnings losses. This led us to wonder whether workplace injuries led to increased opioid addiction and suicide.”

To estimate the association between workplace injury and death, Boden and his colleagues looked at 100,806 workers in New Mexico, 36,034 of whom had lost-time injuries from 1994 through 2000. The researchers used workers’ compensation data for that period, Social Security Administration earnings and mortality data through 2013, and National Death Index cause of death data through 2017.

Previous research by the authors showed that women and men who had had to take at least a week off after a workplace injury were more than 20 percent more likely to die from any cause. They write that this new study highlights the roles of suicide and opioids as major causes of those deaths.

The study was co-authored by Yorghos Tripodis, research associate professor of biostatistics, and Andrew Busey of the Boston University Department of Economics. The study’s lead author was Katie Applebaum of the Milken Institute School of Public Health at George Washington University, and the other co-authors were Abay Asfaw of the National Institute for Occupational Safety and Health at the Centers for Disease Control and Prevention, and Paul O’Leary of the US Social Security Administration’s Office of Retirement and Disability Policy.

There is 1 comment on Workplace Injuries Contribute to Rise in Suicide, Overdose Deaths