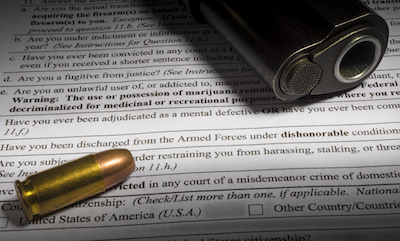 Now, a new study led by School of Public Health researchers adds to the evidence, finding that states with laws requiring universal background checks for all gun sales had homicide rates 15 percent lower than states without such laws.

The study, published in the Journal of General Internal Medicine, is the first to directly compare a set of state gun laws in one statistical model. It found that laws banning specific kinds of weapons may not have an effect, but universal background checks and violent misdemeanor laws do.

“Research has shown that the greatest risk factor for violence is a history of violent behavior,” says lead study author Michael Siegel, professor of community health sciences.  “Public health advocates should prioritize policies designed to keep guns out of the hands of people who are at a high risk of violence based on their criminal history,” he says.

Siegel and Claire Boine, a visiting fellow in community health sciences, also authored a related policy brief. The brief lays out the effectiveness of different gun laws, and recommends legislators support those backed by evidence from this and previous studies.

For the study, Siegel and his colleagues created a unique statistical model to directly compare 10 different firearm laws and their effect on state homicide rates from 1991 to 2016. They used the State Firearm Law Database, a public access database created by the SPH research team. They then used homicide data collected by the Centers for Disease Control and Prevention (CDC), and homicide and suicide data based on death certificates. The statistical model included controlling for a wide range of state-level factors that previous research has shown to be associated with higher rates of homicide and suicide.

In contrast, “shall issue” laws—laws that do not allow law enforcement officers any discretion in deciding whether to approve or deny an application for a concealed carry permit—were associated with a 9-percent increase in homicide rates.

The researchers did not find any association between the seven other state firearm laws and overall population rates of homicide. Those laws included assault weapons bans, large capacity ammunition magazine bans, and “stand your ground” laws.

They did not find any consistent association between any of the 10 laws and overall suicide rates.

The authors cautioned that further research is needed to determine whether these relationships between gun laws and homicide rates are causal. They also noted that laws having no observable effect for overall homicide or suicide rates does not necessarily mean they are ineffective. “It may also be that the laws are not broad enough to affect overall population death rates or that the laws are not being adequately enforced,” they wrote.

Another challenge, Siegel says, is that guns used in crimes flow from states with lax laws to states with more gun control, as the research team’s previous research has shown.

The study was co-authored by Molly Pahn, research manager in community health sciences, and Ziming Xuan, associate professor of community health sciences. The other co-authors were Eric Fleegler of Children’s Hospital Boston and David Hemenway of the Harvard T.H. Chan School of Public Health. The study was supported by the Robert Wood Johnson Foundation Evidence for Action program (but any views expressed in the study do not necessarily reflect those of the foundation).