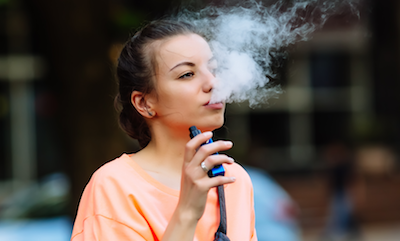 The sudden rise of e-cigarette use, or vaping, among youth has led to widespread concern among parents, school administrators, and the FDA. But, while research has shown an association between youth vaping and smoking traditional cigarettes, it has been less clear whether vaping leads to smoking.

Now, a new study led by School of Public Health researchers finds that youths who start out vaping are more likely to go on to smoke traditional cigarettes than their peers who have no prior tobacco or nicotine use.

The study, published in JAMA Network Open, found that one in five youths whose first nicotine product is an e-cigarette go on to smoke traditional cigarettes.

“Our results support the view that vaping increases risk of subsequent cigarette use in youth,” says senior author Andrew Stokes, assistant professor of global health. “The association was especially pronounced in low-risk youth, raising concerns that vaping may renormalize smoking behaviors and erode decades of progress in reducing smoking rates.”

While previous studies have suggested that vaping increases the likelihood of smoking, the authors wrote that prior research may not have gotten a clear picture of vaping leading to smoking. Most of these studies have looked only at youths who had never smoked, identified those who vaped and those who did not, and then checked back in later to see whether those who vaped were more likely to now smoke. This method may have missed those who had already gone from vaping to smoking at baseline, or those who started vaping after the first round but were already smoking by the second round.

Of those who had vaped first, 20.5 percent reported that they had ever smoked cigarettes, while 21.1 percent of those who had first used another non-cigarette tobacco product first had ever smoked cigarettes. The researchers found that the study participants were three times more likely to go from vaping to smoking cigarettes than to go straight to smoking cigarettes. They also found that this pattern was more pronounced among youth who appeared lower-risk for smoking and other substance use based on the data collected by PATH.

Based on their findings, the researchers estimated that, nationally, 178,850 US youths aged 12-15 years vaped and then went on to ever smoke a cigarette during the study period, and 43,446 went from vaping to reporting that they currently smoked cigarettes in 2016.

But the study might not show the full scope of the problem today, says study lead author Kaitlyn Berry, a research fellow in the Department of Global Health. “Recent estimates from the National Youth Tobacco Survey report that current e-cigarette use among high school students increased by 78 percent between 2017 and 2018,” she says. “Regardless of the exact number, youth who initiate cigarettes through vaping represent a substantial public health challenge that may warrant stricter regulation of youths’ access to e-cigarettes.”

Teens Who Vape Are More Likely to Start Smoking