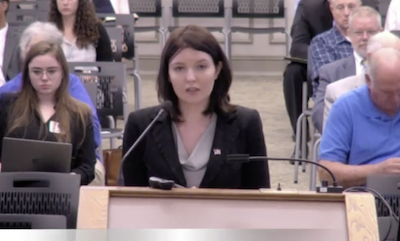 Following mass shootings in El Paso, Texas and Dayton, Ohio over the same summer weekend, the governor of Virginia proposed a series of gun-related bills and called a special hearing on gun violence.

Among the experts who testified before the Virginia State Crime Commission on August 19 were officials from the Bureau of Alcohol, Tobacco Firearms, and Explosives, the Virginia State Police, the Virginia Department of Health, the US Secret Service, and scholars in gun violence prevention—including Claire Boine, a research scholar in community health sciences at the School of Public Health.

“The laws regulating who has access to weapons have a significant impact on homicide, actually by quite large numbers,” Boine told the commission, presenting the findings outlined in a recent policy brief she co-authored with Michael Siegel, professor of community health sciences.

Keeping people with violent misdemeanor convictions from buying a gun comes with a 26.7-percent reduction in a state’s firearm homicide rate, Boine explained, and a 19-percent reduction in the overall homicide rate. “May issue” laws give law enforcement discretion to deny a permit to someone who has a history of violence but no criminal record—such as the Dayton shooter—and reduce gun homicides by 15 percent and all homicides by 11 percent.

On the other hand, Boine said, the research shows that denying guns to people with a history of mental health issues does not affect a state’s homicide (or gun homicide) rates.

This is all according to research conducted using the State Firearm Laws Database, a project led by Siegel and Ziming Xuan, associate professor of community health sciences. Funded by the Robert Wood Johnson Foundation Evidence for Action Program, the database includes all state firearm legislation back to 1991, and is constantly updated as states add—and subtract—gun laws. Every provision of every law is carefully coded so that researchers can see exactly which elements come with reductions in gun deaths.

The findings coming out of that research show that, when it comes to reducing overall gun deaths, who can have a gun is much more important than what guns are available. Assault weapon bans and high-capacity magazine bans do not affect overall homicide rates or gun homicide rates, according to a recent study by the SPH-led research team.

Boine explained part of the issue is that assault weapons bans like the 1994 federal ban define assault weapons based on elements such as a folding or telescoping stock, or a bayonet mount—not elements directly related to the number and rapidity of rounds it can fire. “You could buy a weapon that is as lethal but does not fall under that category,” she said.

However, Boine explained, while high-capacity magazine bans do not affect a state’s overall rates, they could still be very valuable when it comes to mass shootings. “If you look at the Dayton and El Paso shootings, for example, both times the shooter was stopped within 30 seconds of opening fire, and yet in one case the shooter had time to kill nine people, and in the other, 22,” she said. “It may make a difference whether a person uses a ten-round magazine or a 30-round magazine when such small periods of time matter.”

But 99 percent of gun deaths are not mass shooting deaths, Boine said. To save the most lives, she told the Virginia State Crime Commission, the evidence is clear: violent misdemeanor laws, may issue laws, and, of course, universal background checks.