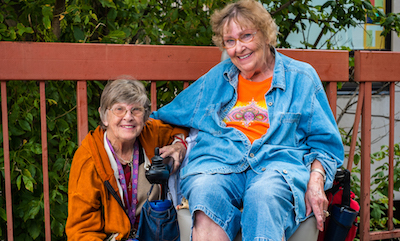 Providing everyday care for a close friend or family member can be stressful, and both physically and psychologically demanding. But intensive caregiving may also have health benefits, according to a new study led by School of Public Health researchers.

The study, published in the Gerontologist, suggests that older adults who are high-intensity caregivers are less likely to die than their low-intensity or non-caregiver peers not simply because healthier people are more likely to be up for the task, but also because providing intensive care may protect one’s own health.

“Benefits may include psychological gratification of helping a relative or friend, feelings of having a purpose in life, and greater physical and cognitive activity from performing caregiving tasks,” says study lead author Lisa Fredman, professor of epidemiology.

Some previous studies on caregiver health have suggested that the stress of caregiving can be harmful, while others have found caregivers to be comparatively healthy—but most of these studies have not controlled for the possibility of caregivers simply being healthier to start with, or considered the different intensity levels that different caregiving cases might involve.

For the new study, Fredman and her colleagues examined the intensity levels of caregiving among 1,069 women in the Caregiver-Study of Osteoporotic Fractures. The women, who averaged 81 years old at the beginning of the study period, were interviewed five times from 1999 to 2009.

The researchers categorized caregiving as high-intensity if it involved assisting a person with dressing, getting in and out of bed, bathing, or using the toilet. They categorized caregiving as low-intensity if it only involved assisting with other basic activities, such as cleaning, shopping, cooking, and getting around outside of the house. They also used a second categorization system, classifying participants who performed more than the median number of these other basic tasks as high-intensity, and those who performed less than the median as low-intensity.

The researchers followed the participants through 2011. During that time, 307 caregivers stopped caregiving, 58 non-caregivers became caregivers, and 306 of the women died.

Intensive Caregiving May Have Health Benefits